If we do not learn from our past, we are doomed to repeat it. Maybe that’s why so many ancient texts have survived to modern times; as an attempt to teach the simple morals and lessons of long ago in the hopes that we as a species are not entirely doomed. Ancient texts are taught in an education environment, but many people are reading them for pleasure and thus the need for creative covers designs. 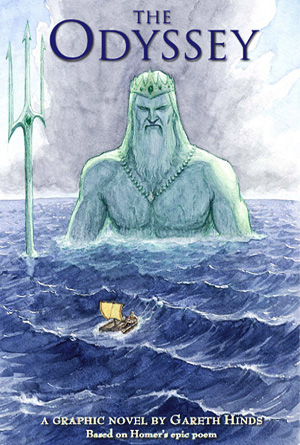 Required reading in many high schools and colleges, the Odyssey has also been rewritten into plays, movies, and here, a graphic novel. The manner in which the story is brought to the reader doesn’t matter as much as long as the details are correct. And judging from this cover, readers are going to be taken on an epic journey as they flip the pages of this book. The Odyssey journeys with the main character Ulysses as he tries to make his way back home after the Trojan War. On his journeys, Ulysses is constantly tested and always facing obstacles. The incredible illustration on the cover of this book is a fantastic way of showing those struggles, all in one fantastic moment that beautifully sums of the frustration of the book. A tiny, fragile vessel is tossed on unfriendly seas as a monstrous, giant figure, presumably a god, looms nearby with a scowling look on his face. This one frozen moment perfectly exhibits the fear, the courage, and the incredible feats that are lived by Ulysses in this story. It is almost impossible to combine so much into one image, but this cover has done it wonderfully. 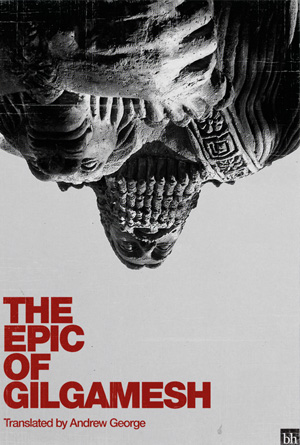 The Epic of Gilgamesh
Another ancient story that has begun to gain new life in modern education is that of Gilgamesh. And even though story is normally left for those required to read it, or simply those who love to get their hands on anything from ancient times, the cover has made this book into something that is more likely to be picked up for casual readers as well. Sometimes, it is the simplest things that are the most effective, and that is definitely the case with this cover. A plain, grayish background floods most of the cover, interrupted only by the darkly contrasting red letters of the title, as well as the helpful information that this story is a translation, and a strangely discomforting figure taking over the top. The biggest part of the discomfort caused by this figure is that, with its unusual placement on the cover, it appears that the reader is actually lying down, and this giant, stone-like man is looking down on them. It’s a mind trick that immediately makes this cover memorable, and persuades the reader to want more from the story than just the vertigo inspiring front image. 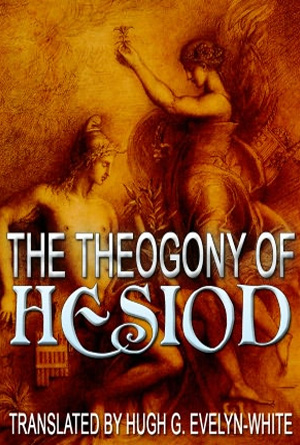 The Theogony of HesiodAnother translation of another ancient text, as made clear with the vibrant white print at the bottom of this cover. Lovers of literature, no matter the genre are sure to be enticed by the bronze picture that illustrates the front of this book cover. Different shades of gold mix and combine to give more information in this picture than many with a rainbow of colors. The bronze ages the picture to match the story within and the two figures on the front make it painstakingly obvious how far back this tale is going to take its readers. The title further adds to the intrigue with a vaguely familiar word and less than familiar, one name author. Everything on this cover draws the reader into its depth, that of history and what happened so very long ago. A mix of curiosity and awe created by this truly unique cover is going to inspire readers to pursue the story within. 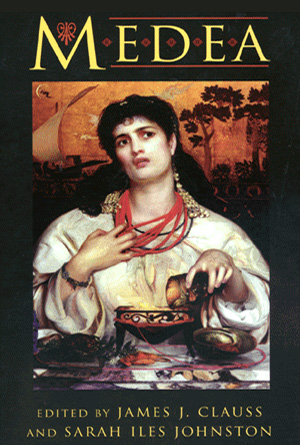 MedeaOne of the first plays ever written has survived the test of time by also being one of the most intriguing. The first of its kind, Euripides created a hero character, Medea, and actually allowed her to make bad choices. Those that have read it know the horrors that Medea laid upon her unfaithful husband, but at the end of the play, who remembers the wronged woman instead of the vengeful wife and mother? The cover of this particular version is incredible because it cries out the injustice that Medea faced at the hands of her husband Jason. This illustration perfectly captures the sadness on her face and the pain in her heart. It reminds people that everyone has a breaking point, and readers are drawn to this tragic woman. Even those who may have never read or even heard of this timeless play, will see the raw emotion on this woman’s face, and be drawn to know her tale. This is a perfect depiction of a character that been remembered for many of the wrong reasons, and that is why this is such an effective cover.

In the world of notebooks, spiral notebooks never go out of style. Despite the existence of digital notebooks, END_OF_DOCUMENT_TOKEN_TO_BE_REPLACED

As an author or publisher, you’re accustomed to using the power of words to captivate your audience’s interest. END_OF_DOCUMENT_TOKEN_TO_BE_REPLACED

An electronic device that embraces portability and functionality, that’s what defines iPads in our world today. They’re a END_OF_DOCUMENT_TOKEN_TO_BE_REPLACED

If you’re looking for a cost-efficient solution for your print projects, you’d want to try publishing your content END_OF_DOCUMENT_TOKEN_TO_BE_REPLACED