When it comes to versatility, it’s impossible to rule out Rod Serling’s name in the list. He was END_OF_DOCUMENT_TOKEN_TO_BE_REPLACED

Have you ever read the book or watched the movie “Stuart Little” and “Charlotte’s Web”? The person behind END_OF_DOCUMENT_TOKEN_TO_BE_REPLACED

A man of strong opinions—that’s what best describes writer, journalist, and critic George Orwell. What made him exceptional END_OF_DOCUMENT_TOKEN_TO_BE_REPLACED

Western is a genre of novels that really targets a specific reader. Though many people may enjoy a thriller as much as they love a romance, Western readers are really a group of their own. They are adventurous, thrill seekers, nostalgic of days gone past when the way of life was much simpler and to the point. Western novels embrace the rugged individual and often the incredible odds that they must face. Each of these Western book covers tells a story of its own before the first page is even read. 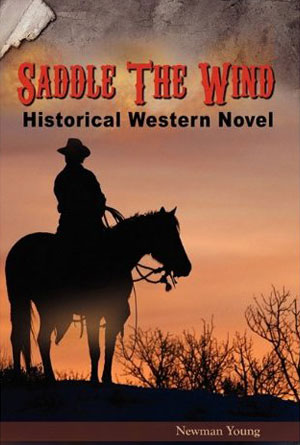 It’s a toss-up of what’s going to catch a reader’s eye first with this cover: the intriguing title or the silhouette of a cowboy upon his horse. The title itself is unique, and brings to mind an incredible image that can only lead to curiosity about the book itself, and the story told within. The letters themselves are made to stand out from the background, with a contrasting red in front of a pastel colored sky. These letters are also in a font that automatically makes people think of print seen in the Old West, and lends further credibility to the story. Beneath the eye-catching title is a rather bland set of letters. The plain black stands out from the sky like the red in the title, but it is the phrase itself that makes it interesting: “Historical Western Novel”, leading the reader to believe that there will be at least a hint of truth in the story to come, and making it all that much more interesting. And then of course there is the shadow of a stoic cowboy on top of his horse. There is hardly a symbol more fitting of a Western tale. They stand together, their details hidden, the dust surrounding them, and daring the reader to learn about them. 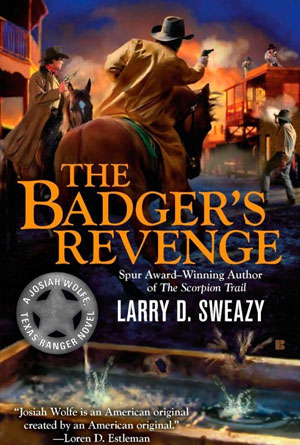 Another easily recognized symbol of the Old West is that of the shootout. Legends like the OK Corral make people highly anticipatory, eager to know the outcome; who lost and who lives to see another day. That’s why this cover is incredible. It is immediately eye-catching with its frozen gun battle brilliantly illustrated. The reader doesn’t know who the good guys are and who the bad guys are. They will have to start reading to find out who it is they are supposed to be rooting for on the cover. The shots can practically be heard ricocheting off the water trough in the foreground; the attention to detail is amazing. Making this cover even more successful is the addition of information that will entice the reader into picking it up, especially if they are already a Western fan. In small, but by no means easy-to-miss print, the reader is told that this book is by an award winning author, and that they have another very popular book out. On the bottom the reader is given further reason to pick up this novel with a positive quote about both this work and the person who wrote it. Everything available on this cover makes it incredibly noticeable and pushes readers to want more. 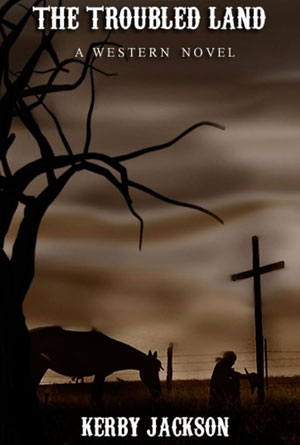 Some stories of the Old West revolve around a town or land that has a plethora of problems. Whether the town is dying or run by corrupt men, they are waiting for someone to come and save them. The cover of this novel immediately lets readers know that this is going to be that kind of Western. Everything about this one creates images of darkness, hopelessness and sadness in the potential readers mind. Why is this land so troubled, and what can possibly be done to redeem it? The silhouettes are powerful images by themselves; the leafless, bony branches of a dead tree looming in the foreground. A cowboy bowing before a cross in apparent mourning, with his hat removed respectfully from his head. The horse, strangely seeming to understand the situation, and bows its head as well, waiting for its master. Each of these on their own are just incredible images, but combined together on this cover create a scene of so much power; the reader is helpless drawn to it. 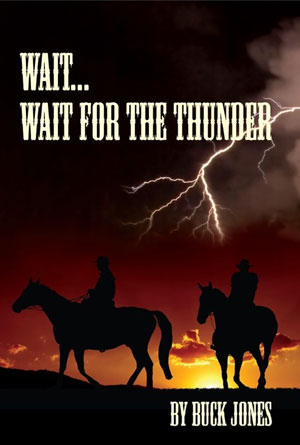 There are so many things about this seemingly simple cover that truly make it stand out that it’s actually hard to find a place to begin. The title is probably the most attention grabbing part of this cover, though it by no means takes all the glory. Not only does it make the reader think of a dozen different things associated with thunder, or even waiting, it actually makes the reader wait; by having that first word “Wait…” the person will actually have a slight pause in their mind before continuing to read the rest of the title. Already, in the span of just a moment, this book has created a powerful allure. Then the artwork underneath the title takes over and further brings the reader in with a combination of simple, yet effective, images. First, the lightning streaking across the sky is bright and impossible to ignore. It also lends to the title itself because everyone knows that lightning is followed by thunder; this creates that imaginary pause in the mind again. The reader can see the lightning, and may even be able to hear the thunder after a second. This brightly lit stormy sky over what appears to be a beautiful sunrise makes the reader think that there will be trials and tribulations to be overcome in this book. That there may even be times when the characters, possibly the two riders on horseback seen on the cover, will be close to giving up, as they continually wait for the thunder, the good times to come. 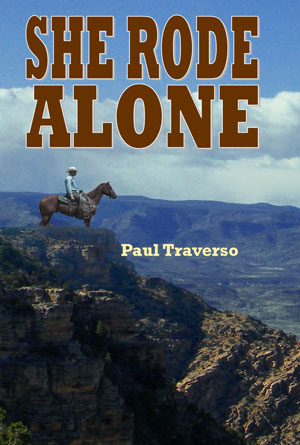 ne more iconic part of the Old West is that it was incredibly male dominated. So when women like Annie Oakley appeared on the scene, they stood out even more just because they were women. That simple fact is what automatically makes this cover stand out, with one little word: She. The title suggests a story about a woman on her own, which not only adds to the intrigue, but also accomplishes something else. It widens its target audience that is usually male dominated to capture the intrigue of more female readers. The clay red color of the letters stand out perfectly from the calm blue sky in the background and easily perform their job of capturing some attention. Then the beautiful, picturesque scene on the cover takes over, giving potential readers a snapshot of a woman on her horse, looking down into an impossible canyon. Both rider and horse have their heads high, and readers know that this tale will include honor, integrity, and probably just a little bit of courage. The author’s name stands out just slightly from the canyon background, enough to give him credit without taking away from the eye-catching effectiveness of the rest of this cover.