Popular Books From The 2000s

Books that gained popularity between 2000 and 2009 were expertly crafted to spark imagination. From the use of supernatural creatures and real life magic, to the thought provoking tales of exotic places. This decade proved that human beings are still looking for some awe,
even in a world that has become dominated by digital images and lightning fast
computers. 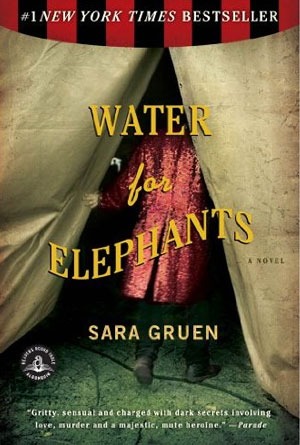 Water for Elephants by Sara GruenThere are few things that can bring the kid out in any person like the circus.  The lights, the sounds, the colors, the animals, the popcorn: they all combine to simultaneously assault every one of your senses in an incredible show of entertainment that is unlike any other.  This book cover capitalizes on those sensations with one simple image that immediately invokes an array of other sights, sounds and smells that mentally transport you back to the circus.  And with that mental journey also comes the powerful nostalgia; remembering the joy and excitement that comes with a trip to the circus.  One simple image: a ring master walking into a tent, the flaps closing behind them, and so much is conveyed to the reader.  This will be a book that will bring back childhood memories, it will take them behind the scenes of one of the most treasured shows on Earth, and from the innocuous text at the bottom, it is sure to be “a rich surprise”.  This is a brilliantly done cover. 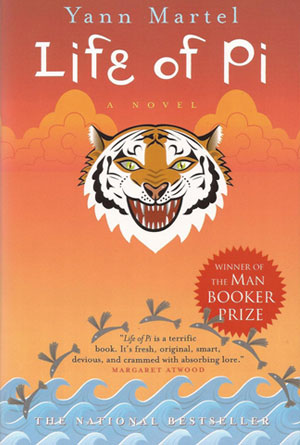 Life of Pi by Yann MartelSome of the first things that come to mind when a person sees a tiger can vary from ideas of a sleek, beautiful animal to thoughts of an exotic, far-away place. Regardless of which thoughts are actually invoked from reader to reader, the point is that this cover will elicit some kind of thought provoking response from those who look at it. Other eye-catching parts of this novel include the color scheme and the way of illustrating the pictures. The orange and blue greatly contrast against each other, which creates an attention getting effect that is sure to stop passers-by. The illustrations themselves are extremely simple, yet just as extremely effective because it is their simplicity that draws the reader in. And at first glance, because of these simplistic pictures, this may look like a novel written from a much older decade than the one it was actually published in, which creates a little intrigue about the story itself. And then of course there is the large, impossible to ignore red “sticker” that tells the reader that this specific novel has already won a prize; and that makes it special. If nothing else about this truly unique cover draws in a reader, that one little sticker will do the trick. 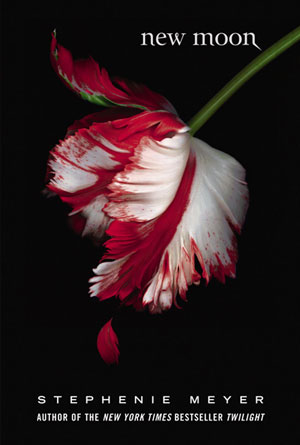 New Moon by Stephanie Meyer
Even if reading about vampires and werewolves isn’t your personal cup of tea, it has been impossible to ignore the immense success of the Twilight Series. These books have captured the attention, and usually the hearts, of readers all over the country and expanding into the world. The age old classic of teenage problems was taken up a few notches when the main character also has to deal with the supernatural. One of the things that may have led to the immediate success of these novels could actually be their unique covers. Because ultimately, when a relatively new author has written a new book and very few readers have heard of either, it’s going to be the cover that is relied upon to really bring in those initial readers, before word of mouth can take over. This particular cover is probably the best example of greatness among the four novels. It has used symbolism with such expertise that it is impossible to ignore. The white flower that obviously represents purity, stained forever with the crimson color of blood: the ultimate symbol of innocence lost, of growing up, or realizing that your childhood is officially over. Everyone has their own tales of when they realized they were no longer a child, but every tale can relate to the impurity brought upon the pure – just like this fantastic cover.

Percy Jackson & The Olympians: The Lightning Thief by Rick RiordanPeople in general are fascinated with the past, and tales from ancient Greece have made their way into our society for a long time now. What makes this cover so immediately enticing is the small, out of the way print that lines the side: Percy Jackson & The Olympians. Right away readers know that this story is going to be about the gods and goddesses that ruled an ancient society. And the picture that illustrates the majority of this cover then tells readers that this is a present day story: with the skyline of skyscrapers dominating the background, and the character in front wearing modern day clothes. Just as people are fascinated by the past, they feel in awe when the past is able to come alive in the present (just look at the success of the Jurassic Park books). A few tiny words sitting off on the sidelines and a cartoon-like image making up the cover come together to create an instant draw to readers, making this book irresistible to pick up, and the cover remarkably successful. 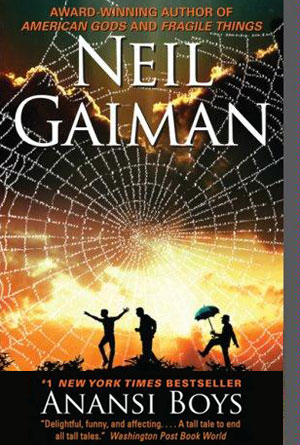 Anansi Boys by Neil GaimanAs present day people are interested in ancient times, they are also drawn by other cultures and the deities that they worship. For those somewhat familiar with some of these other deities, the name Anansi on this cover is going to immediately jump out at them, and that is going to lead to an intense interest. But, for those that may not be familiar with the name, there are plenty of other elements on this cover that make it worthy of notice by those passing by. If the name in the title doesn’t seem like anything interesting, then fiction readers may recognize the author. Neil Gaiman’s name has been made in very large print, taking over the top third of the book and making it impossible not to see who has written this particular novel. And even if the name doesn’t ring any kind of recognition, the fact that the white lettering leads the eyes towards the giant spider web that has been spun is sure to create enough curiosity in the reader to at least find out what this is about. Before they crack this intricate cover open they’ll have one last glance of three characters silhouetted against the immense web, each that seems to be in their own little world as they make their way across the grounds. Now the reader is insanely curious, and just has to know what this book is about; and the cover has effectively done its job.

In the world of notebooks, spiral notebooks never go out of style. Despite the existence of digital notebooks, END_OF_DOCUMENT_TOKEN_TO_BE_REPLACED

As an author or publisher, you’re accustomed to using the power of words to captivate your audience’s interest. END_OF_DOCUMENT_TOKEN_TO_BE_REPLACED

An electronic device that embraces portability and functionality, that’s what defines iPads in our world today. They’re a END_OF_DOCUMENT_TOKEN_TO_BE_REPLACED

If you’re looking for a cost-efficient solution for your print projects, you’d want to try publishing your content END_OF_DOCUMENT_TOKEN_TO_BE_REPLACED