Readers and writers acknowledge that any fictitious narrative takes time to finish, whether that means reading or writing END_OF_DOCUMENT_TOKEN_TO_BE_REPLACED

Science fiction and fantasy-focused literature often fall under the “despised, marginal” genre that most readers and writers neglect. END_OF_DOCUMENT_TOKEN_TO_BE_REPLACED

Many famous writers get recognized at some point in their careers. As for Emily Dickinson, one of American END_OF_DOCUMENT_TOKEN_TO_BE_REPLACED

Self Help books have become increasingly popular in modern society. This becomes a bit of blessing and a curse for those that write them. That’s because people are more aware of the availability of such books and are more actively seeking them. But it also means that because of this popularity, more people have begun to write their own self help books in their attempt to get a little bit of that profit. That’s why a well designed Self Help cover design can go a long way to attract more readers to one particular author’s piece of advice. 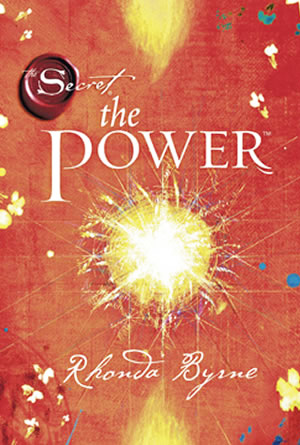 The Power: Rhonda ByrneEven if most people haven’t actually read The Secret, they have likely at least heard of it; from a friend, a coworker, an internet ad or a TV commercial. The power of recognition immediately puts this cover ahead of others because readers are going to lean towards the familiar more than the unfamiliar. Then there is the impossible-to-ignore, bright orange background that dominates a majority of this cover. There are some colors that people see so often that they actually become a little blind to them. Orange is definitely not one of those colors, as its use is not nearly as frequent as others like red and blue. That’s why it is such an effective tool for this cover because someone passing by is more likely to take a second look at the bright orange book than the blue one. And then there is the strange illustration on the front. A reader may not know exactly what it is, but it is obviously connected with the title. Instead of a yellow glow, words give illustrations meaning and readers can actually “see” power on the cover of this book. All of these elements are expertly combined to make sure that this book is not going to be ignored. 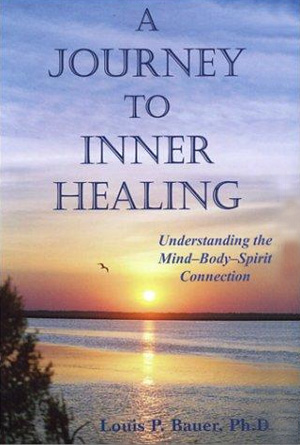 A Journey To Inner Healing: Louis P. Bauer
Calm and tranquility are often sought after but rarely achieved. It’s a fast paced world that we live in today, and it has become harder and harder for anyone to actually sit down, relax, and get some “me time”. This constant stress leads to breakdowns, mentally, emotionally, physically. Everyone has gone through this, or is currently going through something like this, which is why this book cover is so appealing. Instead of jumping out at readers with bright colors and jarring font, its effectiveness is the exactly opposite with soothing images and words that almost blend with the background. When asked about the perfect getaway, most people will imagine a sandy beach, waves crashing, a sun setting on a perfectly tranquil environment. This image is used on the cover to transport people to a potential place of tranquility. Using carefully chosen words, it entices its readers to pick up this book and really start getting that calm that they desire. The most powerful word on this cover is Healing, as it is practically impossible to find a person that doesn’t feel at least one part them, whether it is physical, emotional or mental, needs to be healed in some way. This cover has expertly used soothing images and words to really stand out from others. 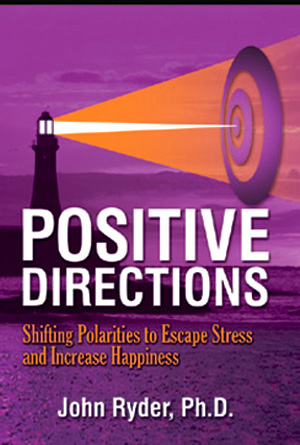 From times when massive ships were a normal way of life, lighthouses have come to be known for their guiding lights, leading ships to safety and avoiding the crushing rocks that could lead to a disaster.  That’s why the image of the lighthouse on this cover is so compelling, it immediately makes readers think of being guided the right way, and this is an essential role for any self help book.  Further adding to this image of guiding light is the pinpointed target on a bull’s eye that tells readers that this is a book that will get them exactly where they want to be.  Of course the title adds to this impression, telling readers exactly what they can expect within the pages.  And just in case the iconic image of the lighthouse and the blatantly obvious title in large white letters that contrast with the purple background weren’t enough to let people know what this book was about, then the smaller, less obtrusive font below the title makes it impossible to understand exactly why this book has been written.  This cover effectively uses straight to the point images and words to get its point across to readers. 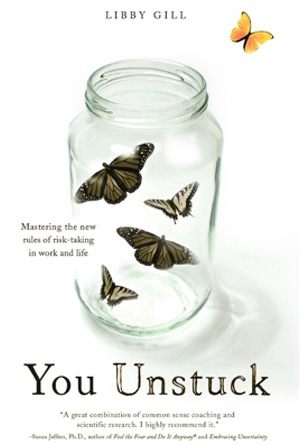 There are two very powerful parts of this cover that really make it stand out from others, and that is the incredible title, and the simple yet striking image that accompanies it. First, the title is going to grab readers because it actually addresses them by stating “You” in large black letters that are unlikely to be missed. And then the word that follows stirs emotions that people may not even realize they are often holding back. The idea that someone may be “stuck” in something: whether a dead-end job, a bad relationship, or just a general rut in life, is not unreasonable. Most people are going to be affected by the idea that this book is actually telling them that they can be “unstuck” from whatever their personal situation may be. And then there is the incredibly simply, yet amazingly powerful image of a jar of butterflies. Four similar butterflies fly helplessly around in the open jar, while one brightly colored butterfly has finally found the way out and made its escape. This is exactly what this book is offering its readers: finding the way out and differentiating themselves from those that are unable to get unstuck. This cover is a fantastic use of symbolism.