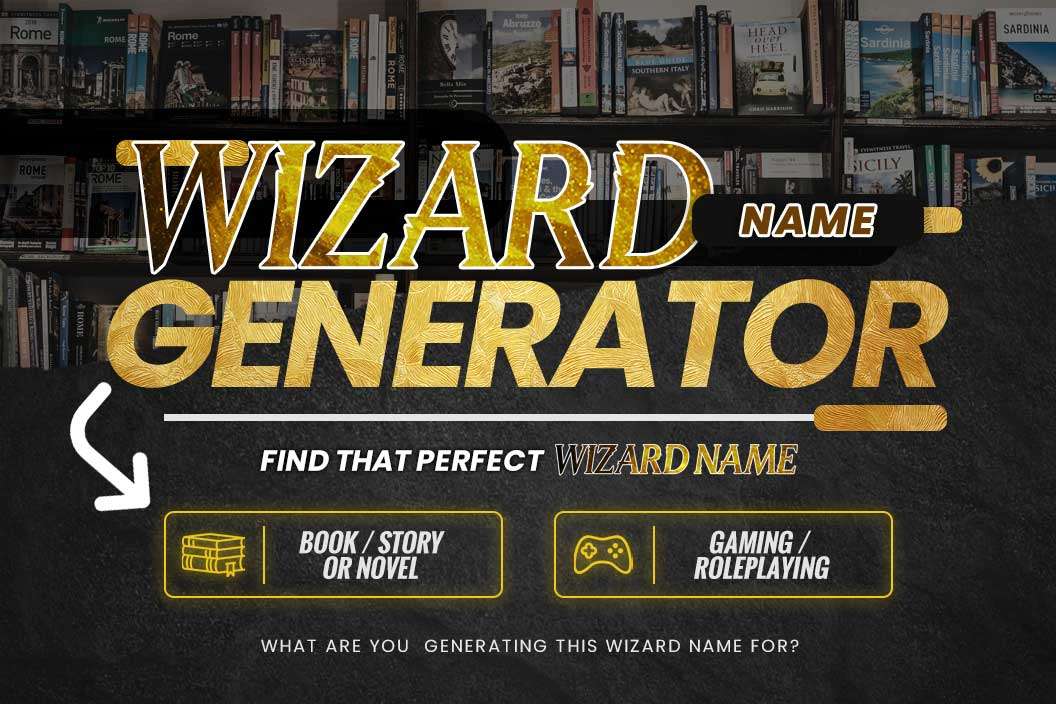 Wizards always spice up fantasy fiction. Magic and the paranormal have a considerable following, and readers are drawn more to such works and others. The powers that a wizard can possess are at the writer’s discretion.

The pages are their playing field, and they can come up with whatever mystical powers they can conjure.

Wizards are predominantly male and have unique names. This is usually a way of making the character more mysterious, hence the problem.

Coming with such creative names is not easy. However, the Wizard name generator makes it effortless and delightful.

It is not clear how and when wizards came into existence. However, they can be linked back to the 1500s. Before this, it was hard to tell whether it was philosophy or the mystical arts.

In the mid-16th century, magic and magical powers became a thing. The documentation of these mystical beings is evident in books and scriptures such as the Bible.

Though many would try to dispute their existence, it is hard to ignore the roles in every culture to date.

Although they are not as influential in the western world, some cultures, such as those in Africa, strongly believe in wizards and witches.

The general disposition toward wizards depended on several factors. We will discuss and handle it later in this article.

You can commonly use magic to refer to men. Still, we can sometimes use wizards in place of witches, sorcerers, and so on.

While in some cultures, they are deemed helpful, and they are shown as evil and worship the devil in most cases.

An era in history documented the death of wizards in record numbers simply because of this notion.

Of course, we never proved most of the accusations, but it took some time before the general masses could let go of the fear of the unknown. This is not to say there were no wizards who practiced bizarre magic.

Unfortunately, religion and mystical practices do not have an excellent historical relationship. The predominant religion, Christianity, has always been at war with the practices of wizards.

In retrospect, Christianity has always believed in good and evil; In this sense, magic and mystical powers fall in the latter.

It is still a mystery where magicians get their magic. We cannot explain their source, and as far as the Bible is concerned, magic and sorcery are of the devil, and no good Christian is to consult with such powers.

The early Christians took this to heart and, in the process, went out on a campaign of killing those suspected to practice mag is and sorcery.

Although this practice has died in recent centuries, some cultures still hunt and kill suspected sorcerers.

Islam also condemns wizardry and any form of witchcraft. They believe that this is a form of Satanism practiced by those who worship the devil.

The Quran condemns the practice. However, there is a section of Muslims who practice.

They use witchcraft as a means to heal incurable diseases. Some refer to them as medicine men and women. Nonetheless, there is a bone of contention between those who practice and those who don’t.

Characteristics And Abilities Of Wizards

Wizards can be identified in several ways, depending on their role. Most times, they play the role of good and protagonists in a story. Still, they can be antagonistic. This article looks at some characteristics to help you identify and name wizards.

They have supernatural powers

These are the most common characteristics. Wizards come with mystical powers that vary from individual to individual.

Usually, a wizard can have several powers. The more skills one poses, the more powerful they are deemed.

Some of these skills include levitation, telekinesis, casting spells, and so on.

As stated before, there was a time wizards were just considered philosophical rather than mystical.

Wizards are considered wise and spend most learning about their environment and how the world works.

They indulge in talks that analyze how loving organisms interact and how wizards can easily manipulate them to favor magic.

Mystics depend on using what is around them to create magic. They are dependent on developing solutions in the supernatural realm to help in the natural. They think through problems and come up with working antidotes.

Wizards take their time to find ingredients for their potions and spells. They need to make the right choices, whether it’s rare exotic ingredients from throughout the world or robust local plants that can be used in a pinch.

One mishap and the portion or spell might not work. Even if it does, the results will not be as expected. They are meticulous in collecting components and making their magical brews.

They are team players

When called upon to solve problems or be a part of the greater good, they play the role very well. They are part of it in conflict or war though they are usually not on the front lines.

An excellent example of this is Dumbledore from Harry Potter. Of course, this is seeable by good wizards.

Wizards practice what is considered the supernatural. Regardless, they are not all the same. The practice is divided into numerous types that we cannot lose all. There are four significant subgroups of wizards: Adepts, Bards, Druids, and Mystics.

Mystics are what we call the introverted bunch and are not talkative and spend their time observing the environment. Mystics tend to manipulate the energy surrounding their body, projecting magical powers.

Druids are much like the mystics without introverted behavior. They channel their power from nature and are much more in tune with the needs of nature.

They do not spend time making things; instead, they make things happen. That is, they don’t need male potions and so on.

As their name suggests, Bards are into expression in their magic. While Mystics and Druids internalize magic, Bards use expressions such as symphonies, acting, sexual nature, etc. They give every rather than take.

Most portrayals of wizards in movies and books fall into this category. Adepts are wizards who invest most of their energy into processes.

They work around elements of their immediate environment by drawing in their essence and then channeling back like magic.

They believe more in rituals than any of the previous three. They spend their time perfecting their art, especially in chants and ceremonies.

Wizard names are meant to have some form of ambivalence to draw in a reader and make the writer eager to develop a character. There are many exceptional wizard names, and the Wizard name generator will help you get the best. However, here are some wizard name suggestions.

This is a prevalent wizard name, mainly since Tolkien used it. It means after comer. According to the book, he was to be a fighting wizard.

Scott is a common name among cultures that is in use even today. But this is also a very food name to give one of your wizard characters.

The name has Gaelic origins, even as Scots used Gaelic in Scotland. It generally means a Gaelic speaker. No surprise there.

Another wizard name that can find itself in your next best seller is Eliphas. It is not a common name though it is related to Alphonse. It is a name that originated from the Hebrew language, and it denotes someone ready for war.

Mark is used in the past, and it is still a familiar name among the common folk. However, this can still be an excellent name for a wizard. It is of Latin descent, and it means to set aside to the gods of Mars.

Gerald is a name you will find among mere mortals, and you would probably not think about naming a wizard Gerald. However, this is a great name that means rule by the spear in German.

Marie is not only a beautiful name but also a great me for a female wizard. It is French and means bitter waters.

Another beautiful name to use for a female wizard is Bessie. It is not common, and it means a commitment in Greek.

Gwen is beautiful not just for newborns but for those wizard-type characters. It is Welsh, and it means sacred.

Joan is not a new name in our world. Many parent names their kids Joan. An excellent wizard name that means God is generous.

Writing fiction requires investing in an array of characters that can capture the attention of any reader. However, that means spending your time looking for the right name.

If you would rather spend your time looking for that perfect name, why not try the Wizard name generator? Also, we hope that this article has helped you in some way or another.

Also make sure to check out our fast and easy-to-use author tools such as the 3d book cover generator and our fantasy book title generator.

In the world of notebooks, spiral notebooks never go out of style. Despite the existence of digital notebooks, END_OF_DOCUMENT_TOKEN_TO_BE_REPLACED

As an author or publisher, you’re accustomed to using the power of words to captivate your audience’s interest. END_OF_DOCUMENT_TOKEN_TO_BE_REPLACED

An electronic device that embraces portability and functionality, that’s what defines iPads in our world today. They’re a END_OF_DOCUMENT_TOKEN_TO_BE_REPLACED

If you’re looking for a cost-efficient solution for your print projects, you’d want to try publishing your content END_OF_DOCUMENT_TOKEN_TO_BE_REPLACED