Prose is one of the most popular literary works. Many authors prefer writing prose because it has several options. You can choose to use your imaginations, write based on facts or even combine your writing with poetry. 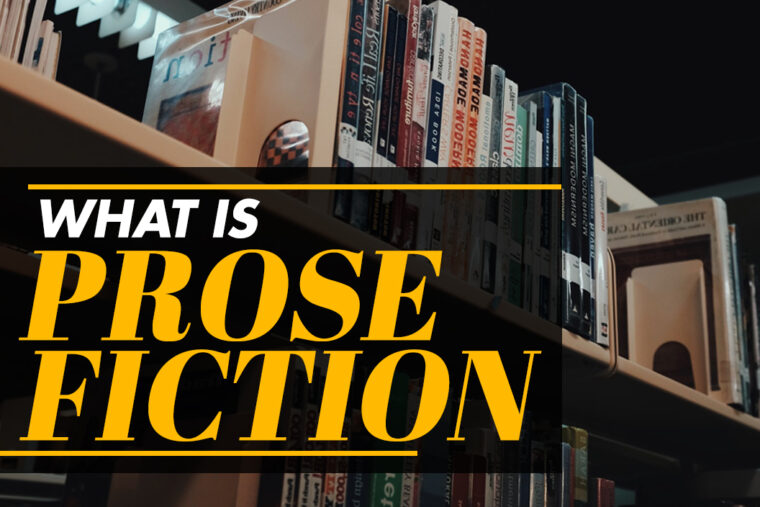 Prose fiction is one form of prose. Like other types, it’s written straightforwardly. But it also has what separates it from others.

First, let’s answer the question, what is prose fiction?

Prose friction is a form of prose that is written from the author’s imagination. It’s a made-up story and has little or no fact or reality. Also, it’s written in the natural flow of regular speech. So, it’s in a narrative form.

Furthermore, it comes in different forms and lengths. So, there are lots of options to choose from in prose friction.

Short fiction: It’s a short story. It’s often a part of an anthology (a book containing a collection of stories). Also, it’s usually posted in a magazine and can be read in a short time. It usually focuses on a single event and so doesn’t have several settings and subplots.

Most children’s stories fall within this type of prose fiction. But there are also adult short stories. Examples are Goldilocks and the Three Bears by Robert Southey and Leave It to Jeeves by P.G. Wodehouse

Novella: It’s longer than a short story but less than a novel. They have several characters, including subplots but in a more reduced form. Also, they don’t have large details, series of events and don’t have several settings like a novel.

Novel: This involves characters that portray human experiences. It has several plots, characters, and settings. Also, it consists of different plot twists that make the story interesting even though it’s long.

Furthermore, it tells a story over a higher length than other types of prose fiction. You’ll need a few days or more to cover a novel, depending on your reading speed. It contains about 80,000 to 120,000 words (250 to 300 pages).

Also, it usually has higher chances of being published than a novelette. Examples of a novel include Animal Farm by George Orwell and Frankenstein by Mary Shelley.

How To Effectively Write Prose Fiction

Furthermore, write your story down first as you have it in your head and from your gathered ideas. Writing this way can build your confidence since you know that you’re about to complete your first draft.

Edit your first draft: When you’re through with your first draft, edit it. Editing your draft can change your prose fiction into a great story. Remove or adjust anything that won’t retain your readers’ attention. Check for descriptions that are long and boring.

Also, let your word count be similar to related works. For instance, if you’re writing a short story, it shouldn’t be more than 10,000 words.

Rewrite your work: Writing your work again is an essential process. It would be best if you try rewriting it several times. That way, you’ll be able to mend parts that don’t make sense. Also, the parts that were a bit hard to rewrite the first time you tried might be easier the next time.

So over time, your writing will be better than it was when you started.

Read it aloud: If you can take out time to read your story aloud, you’ll notice the difference. It helps you get the rhythm of your story. So you can easily detect subtle errors. You’ll also spot some wrong word choices.

Have a great hook: A great hook is what will captivate your readers. Start your story with a dramatic or emotional scene or statement. It should be able to make your readers ask questions so that they’ll be curious enough to read the story.

Additionally, make it unique and captivating so that it won’t be obvious. That’ll make your story a great one.

Make your sentences short: Write sentences that are short and concise. Also, use simple words. It’ll make more sense than long sentences with complex words. Remove unnecessary words from your sentences. So, your work will be easy to read.

Things To Avoid When You Write Prose Fiction

Avoid passive voice: Passive voice focuses on the object of the sentence and not the subject. So it’s better to use an active voice that’ll focus on the sentence’s subject and its action. It helps you write shorter sentences. Also, it makes them easier to understand.

Avoid repetitions: It’s not surprising for your first draft to be full of repetitions. However, ensure you remove them when editing your work. Repetitions are not only seen when you write a word several times.

Furthermore, it’s also seen when you use different words with the same meaning to explain or describe the same thing. For instance, when you use ‘small’ and ‘little’ at the same time to describe “the distance from a house.”

Also, it’s repetition when you use the same word with a different meaning in a sentence. Also, avoid duplicating character traits unnecessarily, such as two sarcastic men. Such traits are usually more effective when in just one character.

Also, don’t use names with similar sounds for your characters, so you don’t confuse your readers. Examples are Emma and Emy or Tony and Tommy.

Furthermore, the opening lines of your scenes should not start the same way. Don’t start all with the scenes with dialogue or monologue. Let there be variety in your work. Therefore edit all repetitions.

Avoid filtering: It refers to adding narration unnecessarily to your work. It can withdraw your reader from the character. Also, don’t add your narration. Your readers should see your story from the perspective of your main character or narrator.

Furthermore, your readers should see the action and not be told the action. For example, I heard the dogs barking, and then I saw them running towards me. Rather say: The dogs barked, and then they ran towards me.

Furthermore, it should contain who tells the story and clarify all the points of view of the story in the scene. It should also show exactly where the characters are, especially when they changed locations. It shouldn’t be vague in any way.

Also, specify the time, has a long time has passed, within the same month, or in another year? Let your readers be clear about what happens in each scene.

Benefits Of Writing A Prose Fiction

Use of imagination: Prose fiction is generally made up. So, the writer can be very flexible as he stretches his imagination. It also, in turn, stretches the mind of the readers. Also, it’s a fun way to write, as you make use of the unknown and escape regular life.

Utilize different techniques: When you write prose fiction, you use various techniques. Such techniques include metaphor, flashback, diction, narration, etc. It also uses dialogue to improve a plot. Also, the writer can use different viewpoints.

Has various lengths: In prose fiction, you can choose any length depending on your capability. The word count of your story determines its category. You can write as short as 500 to 1000 words (flash fiction) and as high as 60,000 to 100,000 words (novel).

It has various forms and subgroups: This boasts several categories. So the options you have to choose from is unlimited. It’s because the ability of a writer’s imagination is endless. It cuts across romance, science, history, etc.

Sometimes, your work may contain more than one category. But it’s still classified into one so that it can be easily grouped.

Universal themes: No matter the form or length of prose fiction, the themes are universal. Lots of people around the world can easily relate to the themes. For instance, people should be able to stand by their families. So, such books tend to make readers emotional. It’s also likely to get popular.

However, it may be different in the future. This pattern allows the readers to flow when they read since it’s their regular speech.

Prose Fiction is a broad form of prose, so be sure to choose the one that appeals to you when you write. However, don’t just write; avoid pitfalls that’ll reduce the quality of your work.

Bear in mind also that even if it’s a short story doesn’t make it very easy to write. And when it’s a novel doesn’t mean it’s difficult. It depends on you, including how you can use your imagination to write effectively.