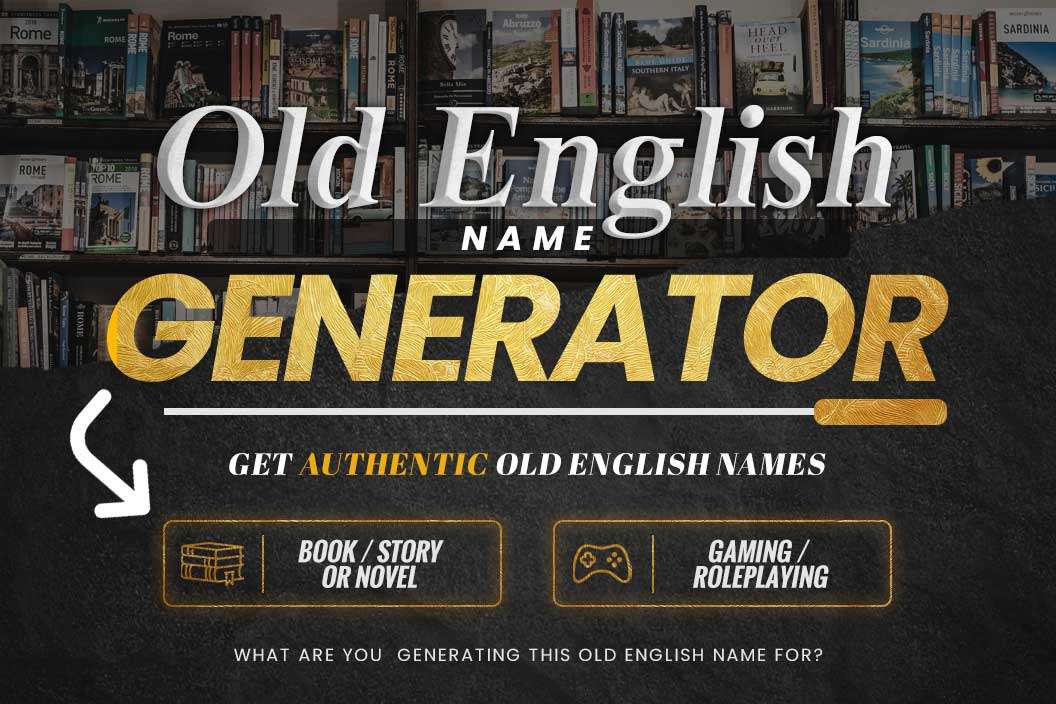 Old English names are a curiosity to many people. Some of the most famous English names have come from the Anglo-Saxon language spoken in England.

If you’re creating a new character for a periodic novel, and need a unique name, then Old English is the best way to go. The names have significant meanings, but they are also beautiful and authentic.

This simple Old English Name Generator will give you a quick idea of what your name might sound like. The inspiration of these names is Old English, which the Middle Ages spoke, and likely used to write in official documents and books such as Beowulf.

What Is The Old English Language?

This language is an old ancestor of modern English. It is a set of dialects, now historical, of the West Germanic language spoken in parts of Great Britain and Ireland until about 1150.

Origin Of The Old English Language

The Anglo-Saxons were a tribe of Germanic people who migrated to the British Isles around the 5th century AD. They included the Angles, Saxons, and Jutes who arrived from northern Germany, Denmark, and Holland.

They were one of the two main groups of the period following the collapse of the Roman Empire in Britain, which consisted of people from Germanic tribes that invaded Britain from continental Europe.

They spoke Old English (also Ænglisc, Anglisc, Englisc, or Olde English), an early form of the language that would become English. It was a vibrant and expressive language containing four dialects spoken in different regions.

The Old English language was one of the ancient Germanic languages spoken by the Anglo-Saxon people in the area, which is now England, southern and eastern Scotland.

It was also spoken in the Isle of Man and Northumbria (present-day northern England and southern Scotland) between around 450 and 1100(mid-5th-mid 12th centuries).

It developed from North Sea Germanic in the first half of its history and then became influenced by the West Germanic languages once speakers were in contact with them. Therefore it had more Germanic words in it.

Most modern English words come from Old English. The most common types of words are nouns, verbs, adjectives, and compound words.

However, Old English also contained pronouns, adverbs, and prepositions, which do not exist in Modern English.

It had a grammar similar to Classical Latin and even more so to classical Greek and Gothic, and other extinct languages. These languages were older versions of the Old Frisian, Saxon, Dutch, and Old High German.

Both the modern languages of the Scottish and English people have their roots in the Anglo-Saxons.

Its written form was rare, and it was done in runes when they did. The Norman invasion of England in the 11th century (in 1066) resulted in many borrowings from Norman French.

As a result, vocabulary and spelling norms developed to give English a more “regular” appearance, dissolving many inflections that characterized earlier forms. This is recognized as the end of Old English and, as a result, the beginning of Middle English.

The body of writing written during the Anglo-Saxon period, following the entrance of Christianity but before the Norman Conquest, is known as Old English literature.

Old English literature has been influential in shaping the modern world. The Old English literary works list is long and contains many authors who were more than just writers. Their work was motivated by their desire to inspire and change the world.

There are around 400 existing manuscripts, of which approximately 189 are deemed essential. Furthermore, some Old English lettering may still be seen on stone structures and ornamental goods.

Some Old English poetry’s preservation is in the “Exeter Book,” a manuscript dating around 1050.

The poetry produced in this period is significant, as it is some of the oldest. Some influential literary, poetic works from the Anglo-Saxon period include; Beowulf, Genesis A, Genesis B, Cædmon’s Hymn, and Judith.

Old English is a fascinating and complex period of the English language. It is essentially a mystery to even the most educated linguists and historians.

It’s hard to get a hold of because people used it many centuries ago, and all that remains are some old pieces of literature and fragmented records of its pronunciation.

The use of Old English in literature has been a hot topic for quite some time, especially among the purists who wish to maintain the integrity of the language.

But its usage has increased a lot over the years, mainly because it is a great way to express an idea different than what everybody else is doing.

The standardization of English spelling and word usage has been around since 1550 hence the somewhat ambiguous term “Old English,” which refers to the pre-standardization language.

The more southerly dialect was West Saxon, which was spoken from Wessex (modern Hampshire), and extended as far as modern London.

The East Saxons were located in Essex, where their language dialect’s preservation is in writing more than any other form.

The Northumbrian dialect stretched from the north to the south of River Humber. Inhabitants of the north of the Thames river and inland part of Southern and Mid-Central England spoke Mercian dialect.

People in parts of East Anglia used it. Mercian was the dialect of Old English that became the language that we now call Middle English—the language used by Chaucer and other English writers from roughly 1100 to 1500 A. D.

The earliest English names came from the fifth century when the Anglo-Saxons migrated to England.

The Old English language has its origins in the Germanic language family, including German, Dutch, and Swedish.

However, English also has words derived from other language families, including Latin and Greek, Romance languages like French and Spanish, Celtic languages like Irish Gaelic and Welsh.

One of the most important things to remember when using an Old English name is that it should have meaning relevant to your character’s personality and history.

1. Old English Given Names From Proto-Brythonic

The basis of the names is on the languages spoken by the earlier inhabitants of Britain before the invasion of the Anglo-Saxons. These languages include; Cornish, Welsh, Cumbric, and Breton.

There are quite a few Celtic names that have made their way into English. These names have been borrowed through various avenues of interaction between the Celts and the English.

Some of these names are well known, while others are only known to those passionate about their Celtic heritage.

Many Old English names come from Old Irish, spoken in Ireland before the Norman invasion. These names are beautiful and detailed in their meaning.

An Indo-European language (also called a satem language) is a language that uses grammatical cases that descend from Indo-European.

Old English names derived from these languages have different descendants. It will be from Ancient Greek, Latin, Sanskrit, Iranian or Gaelic most of the time.

The Old English name generator is a fun tool for those interested in adding a bit of history to their fantasy worlds. You can use it as inspiration for picking an original character name for period novels and periodic short stories.

There’s no need to put yourself through the stress of coming up with unique names when the Old English Name Generator is here to help. You’ll get access to thousands of authentic name suggestions with the Old English name generator.

We hope you enjoyed the Old English Name Generator and that it inspired you to create a masterpiece in your upcoming novel, play, or short story.

Also try our incredible range of tools like our 3d cover maker or for title ideas for stories.

What makes a book cover cool? Although there’s no definitive answer to this question, a few factors might END_OF_DOCUMENT_TOKEN_TO_BE_REPLACED

Creating book covers is an essential part of the publishing process, and a lot of thought goes into END_OF_DOCUMENT_TOKEN_TO_BE_REPLACED

Think about it – when browsing through a bookstore or online, what makes you pick up a book? END_OF_DOCUMENT_TOKEN_TO_BE_REPLACED