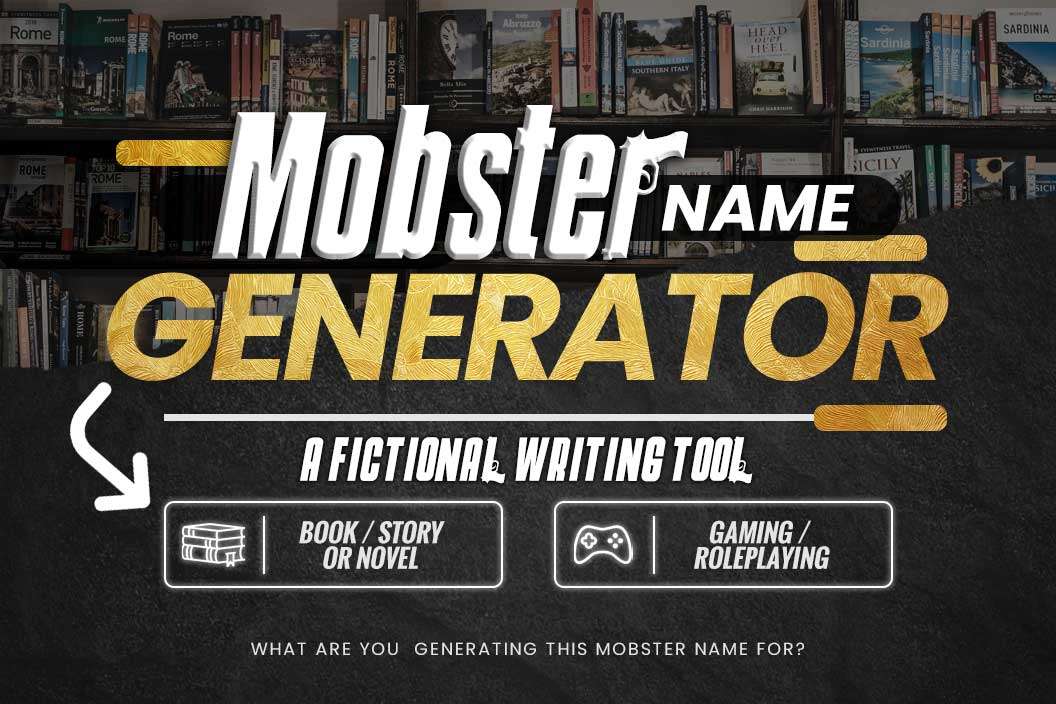 Character names are essential. They introduce and amplify the subjects’ character. It helps the reader paint a mental image of the people being described. Getting the correct character name is essential for any literature piece.

Character names give the subjects life.

While many writers struggle to develop character names, it shouldn’t be the case. With the Mobster Name Generator, you get access to thousands of practical and worthwhile suggestions. It is the ideal tool for all fiction writers.

Also, the names created by the Mobster Name Generator are carefully chosen to reflect the personality, history, and identity of the character.

The Life Of A Mobster

A mobster is a member of a highly organized criminal enterprise. These criminal syndicates are run in a business-like fashion. Each member has a role to play within the mob, and each role has a paygrade.

A mobster’s life is as eventful as it gets. They get up to all sorts of criminal activities. Mobsters operate in cities, though they might even operate in entire countries.

These criminals usually have politicians and the police in their back pockets and on their payrolls.

These are collections from legitimate businesses that they collect to finance the organization’s activities.

Mobsters usually have heavy weaponry that they use to carry out criminal activities, and in some cases, assassinations.

Mobs are so dangerous that they practically own a country or city. Their influence is felt in all axis of power. Mobs control monetary policy, business practices, and even legislation.

Mobsters may even be members of the legislature in extreme cases.

These gangsters operate in a highly professional manner. Unlike common crooks, they are typically well-dressed and ride in decent cars.

They can live an expensive lifestyle. A special oath binds mobsters, typically very protective of each other.

You might go as far as to say that with mobsters, there is honor among thieves. These criminals are closely knit under the leadership and authority of the mob boss.

The mob boss is the kingpin. He is the highest authority in the crime syndicates. He orchestrates and approves of the mob’s activities decides who to assassinate and do business with.

You do not want to be in bad books with the boss, as you are likely to end up dead in ‘mysterious circumstances.’

Some mobs emerge from crime families. These families recruit other members to become part of the syndicate. They expand their operations through corrupt police officers or government officials.

It is most uncommon to find mob members successfully infiltrating the police force. They use state resources to carry out criminal activities. These criminal syndicates practically become the law in the lands they operate.

In some cases, two mobs might clash, or there might be a revolt within the mob. It usually leads to violent wars with devastating death tolls.

Clashing mobs eliminate each other with extreme prejudice—these mobsters murder entire families and clans during revolts and wars.

A war might occur when an ordinary member wants to become the mob boss or the don. It is usually started by assassinating the boss, and from there, all hell breaks loose. Bodies pile up on the streets, and in all cases, civilians inadvertently get caught in the crossfire.

Revolts might occur, but they are uncommon. One of the most famous mobs in history was the Sicilian Mafia.

It is one of the most feared crime syndicates in history. The mob’s weight was felt all over Europe and even had operations in the United States.

Mobs almost inevitably collapse due to internal strife, being knocked off their patch by another mob, or when they are overwhelmed by law enforcement.

The collapse of a mob usually spells relief for civilians, as mobs are usually oppressive and brutal.

The collapse of a mob doesn’t always spell the end of a criminal enterprise. There is always an opportunist waiting in the wings, ready to kickstart the operations.

As portrayed in movies and books, a mobster’s life might seem fun, but they almost always end up in jail or murdered.

The genre depicting the lives of mobsters has become common. The stories are generally fascinating and fun to read.

Did you know that most of the mobster literature is based on actual events? The real-life stories usually are so captivating that you wouldn’t need fiction to depict the events. Here are the best literature works on mobsters:

It is one of the most famous literary works in the genre. The godfather was later adapted into a movie on account of its popularity.

It is a fictional story about a mafia in Sicily. The story is set when Don Vito is at war with four other mafia families.

Vito is shot dead by Sollozzo’s men, and it is up to Vito’s sons to take over the family business. Vito’s death instigates a bloody mafia war. It is an epic story of tragedy, crime, and retribution.

2. Don Winslow: The Power of the Dog

The Power of the Dog is an epic fictional investigative piece by Don Winslow. It is a story of revenge and mind-boggling discovery.

A Drug Enforcement Agent named Keller is on a mission to bring the Barrera family to justice after the brutal murder of a DEA agent in Italy.

Keller’s quest for justice opens up a pandora’s box. He discovers the US and the Mexican government’s links to the lucrative drug trade. Keller has inadvertently made himself a target.

The Neon Rain is an epic story about the life of Dave and an investigation into the mysterious murder of a woman.

Dave, an ex-military combatant, discovers a woman’s body floating out in the lake while doing some fishing.

Dave is confronted with the demons of his past, as well as the dangers of dealing with corrupt cops. It is an epic story of instinct, redemption, and love.

The Rules of Wolfie is an incredible story about a hotshot, Eddie Gato. Eddie is not content with his meager role in his family’s criminal enterprise seeks his path to greatness.

The two must now make it across the Mexican border before the mob murders them.

5. Junichi Saga: Confessions of a Yakuza

Junichi Saga is a real-life story about a famous Yakuza story. Ijichi tells the story while he is on his death bed.

The story is an autobiography of sorts.

It recounts how Ijichi run away from home to Fukagawa, a district in Tokyo. He worked as a coal merchant, his various stints in prison, and eventually service in World War II. Junichi recounts how he was initiated into the Yakuza and his epic rise, becoming the don.

Five Families is a real-life story about the criminal syndicates that once dominated New York. The story follows the epic journey of the rise of the five families to prominence. It shows how they had such a firm grip on New York City.

The book hints at a possible resurgence of the families in present-day New York.

Anyone who has written fictional books or scripts will agree that coming up with character names is incredibly challenging. It pushes your wit to the core. Many writers falter in this stage, making the final work less captivating. Using the Mobster name generator will make your work much easier.

You want to keep your audience enticed throughout the book? Make this happen by using the Mobster Name Generator. The tool gives you access to thousands of names and suggestions. It is the perfect tool for generating fictional names for your story.

Enjoy using the Mobster name generator and be inspired to create a masterpiece in your upcoming novel, play, or short story.

In the world of notebooks, spiral notebooks never go out of style. Despite the existence of digital notebooks, END_OF_DOCUMENT_TOKEN_TO_BE_REPLACED

As an author or publisher, you’re accustomed to using the power of words to captivate your audience’s interest. END_OF_DOCUMENT_TOKEN_TO_BE_REPLACED

An electronic device that embraces portability and functionality, that’s what defines iPads in our world today. They’re a END_OF_DOCUMENT_TOKEN_TO_BE_REPLACED

If you’re looking for a cost-efficient solution for your print projects, you’d want to try publishing your content END_OF_DOCUMENT_TOKEN_TO_BE_REPLACED