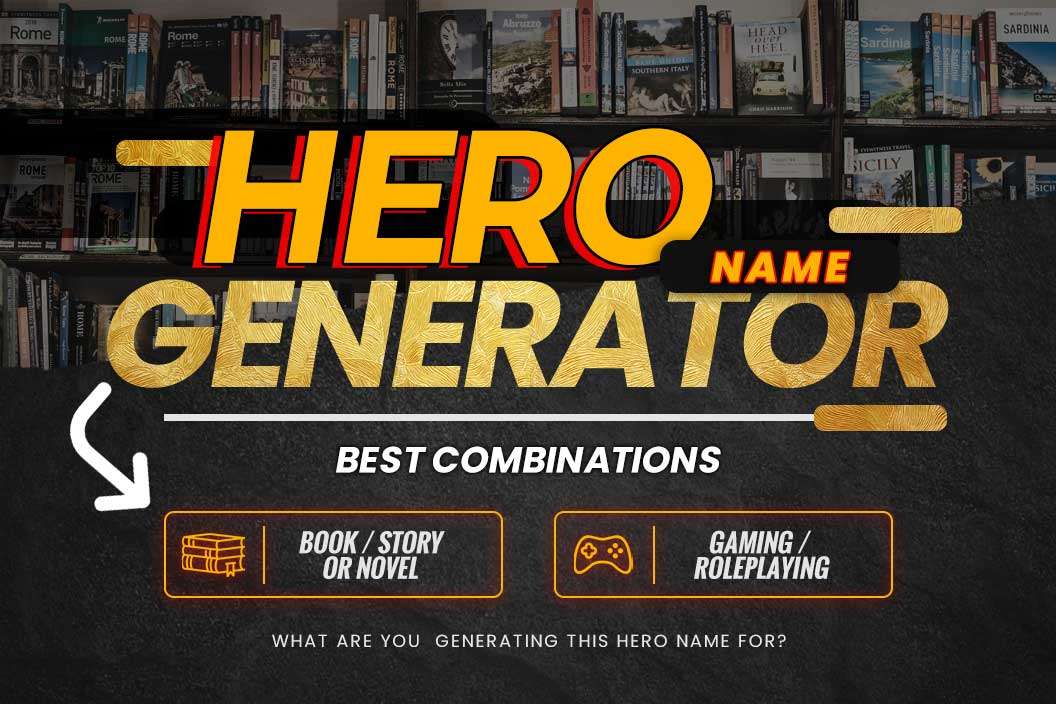 Stories are probably among the best things when you want to educate, encourage, inspire, engage, and many more. Hero stories are pretty inspiring and help improve people’s lives.

They have several energizing functions for its reader. The hero stories inspire us to action, help heal psychic wounds, promote personal growth and lastly, entertain us.

As a writer, you might have finished your unique hero book, but you can’t find the perfect name for your characters.

That’s where the hero name generator comes in; the tool generates bright and bold heroic names. This generator will help you find the perfect name for your hero characters. The names are computer-generated; thus, you can research each name.

A hero can be a natural person or a fictional character. Heroes are known to combat danger with much courage, strength, etc. Term hero is not gender-specific and refers to both genders. However, there’s heroin which solely refers to women.

Heroes in classical epics are known for their things for honor and glory. The modern and post-classical heroes did perform selfless and wondrous deeds for the common good.

The villain is the antonym of a hero. White hat and good guy are the standard terms associated with a hero.

In classical literature, the description of a hero was quite different.

They are usually revered or main characters in all heroic epic poetry. Classical heroes are legends that push for military conquest and follow a strict personal honor code.

Hero definition has changed over time. Today they are people with fine qualities or have done the brave act. Heroes range from mythological, historical, and modern figures.

What Makes A Hero?

To many, the mention of the term hero paints the picture of a human with super strength. Good heroes can be hard to find.

It’s because heroes are genuinely good, selfless, and significantly impact people’s lives. Heroes are people who are willing to risk their lives for others.

Movies paint the best picture of the heroes. Each time people hear about heroes, movie characters like Batman, Superman, and Captain America come into their minds.

Pet imagine heroes as people who can do extraordinary things when duty calls. To others, heroes are legendary and mythological figures with divine descent. Plus, they must have great ability and strength.

In addition, in today’s society, several people are considered heroes. People who engage in one-time bravery acts are heroes.

For example, the medics (professional nurses or doctors) who took part in Covid 19 became world heroes. Because they put their health at risk to help others get better, others died.

The medics had important personality traits like nurturance, empathy, etc., and lived under a strict moral code.

Characteristic Or Qualities Of Heroes

Many unique characters make up heroism. They include bravery, courage, determination, helpfulness, and many more.

It is easy to understand heroes’ psychology, but it’s almost impossible for a person to learn heroism. Here are some of the significant characteristics of heroes.

Some of the critical variables that contribute to heroic behavior are compassion and empathy.

People that rush out to help those in adversity and danger usually do it out of genuine care for others’ safety. Heroic people feel that those around them need their help, and they step up.

The proper training and physical ability to handle different situations also determine whether someone becomes a hero. For example, you need to have the sheer physical strength to be a rescuer.

It will surely help you make a difference. People with proper training are more ready to help and will step up each time their skill is needed.

Heroes don’t only need to be compassionate and caring. Throughout history, heroes possess the knack to view things from other people’s perspectives.

If a hero meets a person who needs help, they should put themselves in the situation then try to figure out the right things.

All heroes have self-confidence that makes them rush in a place that others fear to tread. Overall, people that do heroic acts feel pretty confident with their abilities.

Heroes are known to have intrinsic beliefs during a crisis. They can do or handle any challenges and be successful regardless of the odds.

Heroes do live by specific set values that differentiate them from others. They respect their values and go through different personal risks to ensure they don’t break them.

The values give them the courage to tackle and resolve situations.

Bravery is one of the critical characteristics of heroes. A person that can risk his life to save people from a burning house is fearless. Naturally, heroes are usually positive thinkers.

The positivity allows them to overlook the immediate danger because they see a more optimistic outcome.

The tolerance risk for heroes is also high. There are many caring and kind characters; however, they shrink back when there’s danger.

Heroes usually take action and thus face more significant risks in different ways. Heroes never give up, and they keep working on their goals despite setbacks.

It means heroes are persistent. Heroic act is a choice that most heroes have to make at some point.

Today we are in the hero’s age. Almost all comic books are about heroes and their global effects. Here is a list of the most influential and famous heroes.

The selection is according to their cultural impact, mythology, personality, nemeses, power, etc. The things in the list usually define the heroes’ power.

The concept and phenomenon of spiders man came to light in 1962. Spider man’s appearance is quite different from the rest. Unlike other heroes, spiderman doesn’t have extraordinary muscles or granite chins.

Instead, he is famous for his impressive oversize white eyes and long limbs. The amazing spider man’s secret is he’s his creation.

People love this hero because of his passion for making the world or his city better. Plus, he is aspirational, like other heroes.

He is a challenging but mysterious guy and is more of a shadow. The creators of batman did want a fashioned rival for popular Superman.

Therefore they created the batman character by exploiting superman contrast. Batman is the only hero who has significantly influenced the hero’s cultural perception.

Superman has a lot to his name. Firstly he was the first American superhero. Today there are many heroes, and some are much more powerful than him.

During the days, America had simple ideals: justice and truth. Superman ensured the simple ideals were upheld by saving humans from themselves.

Some do not know the history of Superman; he is simply krypton alien with super speed, flight and strength, and laser focus vision.

Hero lovers know him as the first hero of America. Superman did save humans even when nobody needed him.

Most superheroes typically run into collapsing or flaming buildings to save civilians. After that, you’ll see the pose with fans adoringly. Wolverine is quite different, anti-social, and grumpy.

He doesn’t love being around people but will do anything to protect other people. The hero was born in 1800 Canada and had a mutation.

His knuckles usually produce switchblade claws but also could quickly heal. The mutation was both a curse or blessing to wolverine, and it did slow down his aging process.

Therefore wolverine had the chance to experience different lives. It includes fighting in World War II as a soldier.

In the earliest years, iron money was nowhere near heroism. He was a ruthless businessman and would profit from death. Then he was not sympathetic at all.

Stark’s love for humanity began during the cold war era when he had a drinking problem. Stark decided to draw strengths from his weaknesses and not define him. He also did use his intellect.

The creators of the hero did depict captain America as a political statement. His armor or cloth was red, white, and blue. He was undoubtedly a superhero version of the famous Uncle Sam.

He is against the government that doesn’t respect citizens’ private lives. Captain America is unhappy that even the very institutions that should protect the people have become a threat.

There are tons of hero names, and the hero name generator will help you get the best. Here are some other examples of amazing hero names.

The hero name generator will help you find names that perfectly fit your heroes. The superhero’s names suggestions are many, and chances are you might get a combination of an existing name.

It would be best to research the specific names to match your characters’ personalities.

Overall, heroes play an essential role in human lives and have outstanding personalities. People love stories about superheroes because of their teachings and many more.

Got time to spare? Check out our book mockup online and book title name generator.

What makes a book cover cool? Although there’s no definitive answer to this question, a few factors might END_OF_DOCUMENT_TOKEN_TO_BE_REPLACED

Creating book covers is an essential part of the publishing process, and a lot of thought goes into END_OF_DOCUMENT_TOKEN_TO_BE_REPLACED

Think about it – when browsing through a bookstore or online, what makes you pick up a book? END_OF_DOCUMENT_TOKEN_TO_BE_REPLACED