Are you interested in learning slam poetry? Or perhaps you love listening to the poets recite their lines? If yes, then this post is for you. 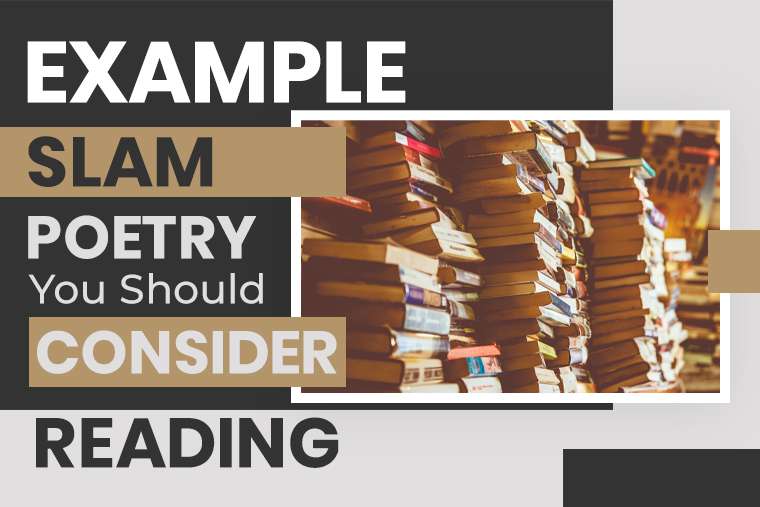 Slam poetry gives poets a platform to showcase their artistry, and their voices reach the world. It’s also an opportunity to address issues that relate to society and various aspects of our lives.

Keep reading to understand slam poetry and get examples that’ll help you get better.

What Is Slam Poetry?

Slam poetry is performance poetry that involves spoken words. It’s also performed at slam competitions before audiences and a panel of judges. The performance involves gestures that transfer the emotions behind the poem to the audience.

Give Me a Chance by Beau Sia: This is a slam poem, which has some comedy. It triggers emotions that’ll make you smile. Even though many people love the poet, he still wants someone that’ll give him a chance. It also describes everybody’s desire to change the world.

The poem ends with the ambition of people from low-income homes. Such people have untapped talents and potential due to their low funds. It presents the inequalities in societies and calls for the need to change the world.

Western Super Nightmare by Harry Baker: The poet has a large number of views worldwide. The slam poem talks a lot about saying “no” to situations. It also explains setting boundaries, avoiding risks, taking precautions, and guarding time. It shows that you have to take it easy in life and have fun.

Play On by Omar Musa: It urges you to focus on today and make the most of it because tomorrow is not your friend. Also, it talks about enjoying the moment and not postponing happiness. You have to experience all the joy and fulfillment of the moment.

Shake the Dust by AnisMojgani: The slam poem aims to lift people equally. We don’t need to put men down to bring up equality in society. There are men who do a lot to keep up and take care of their families. The poem recognizes such men.

The Only Reason We’re Alive by IN-Q: The poem describes love in a new way; the ability to stick to the end against all odds. Furthermore, love is not momentary but surpasses time, living and dying together. Such kind of love is not only achieved when you grow old as it can be at any time.

Def Poetry Jam by Black Ice: The poet performed the untitled slam poem at Def Poetry Jam. He talks about how people of color have been at a disadvantage. He reveals the slavery and norms that keep people working for others.

The poem points out the issues in the music industry. It includes record labels controlling how artists express themselves and what they sing. Yet, they make the bulk of money.

Ohm by Saul Williams: He combines meditation and hip-hop in the slam poem. The lyrics are great, and his performance blends it well.

What Teachers Make by Taylor Mali: The poem appreciates teachers and their values. He talks about the impact of teachers, including how they make children behave in the right ways. What Teachers make is far beyond the money.

Nothing Left by Bobby LeFebre: It centers on the COVID period and how it’s best to reflect on oneself. Since some people aren’t comfortable with themselves, they yearn for social contact against all odds. It talks about learning to love yourself so you can connect better with yourself.

Falling in Like by Big Poppa E: The poem talks about the sparks of liking someone and future romance. It focuses on young kids, including how they relay their feelings to start a friendship.

Last Love by Rachel McKibbens: The poet tells women not to go after a kind of love that disrespects them. It also personifies the ‘last love’ that is gentle and warm. Finally, it describes the ability to live above trauma and past abuses.

Dear Straight People by Denice Frohman: The poem brings up the discrimination between sexuality and gender. It also talks about straight people who make being gay a problem. And bring out the reason anyone can be who they want to be without having to hide it.

The poet manages to make her points humorously.

Pursuit of Happyness by Ed Mabrey: The poem centers on a conversation with a homeless man. It reflects the struggles of low-class and homeless people. Appearance can deceive you into believing that’s what a person is. What matters is what’s in your heart.

Dear Ursula by Melissa May: The poem is a letter to Ursula (the villain of The Little Mermaid) after Disney made the character skinny. It reflects cultural values, including what society sees as desirable or not. It also demonstrates the stigma of people who don’t have the desirable criteria for beauty.

To The Boys Who May One Day Date My Daughter by Jesse Parent: This poem reflects the poet’s love for his daughter. It shows what he wants from the men who will date his daughter and how to treat her. The poem makes its points with a mix of comedy.

OCD by Neil Hilborn: The poem reflects how a man that has a mental illness sees romance. He falls in love instantly the first time he saw the lady. It seemed like temporary relief from his illness. But over time, he became too obsessive, and she left him. And that left him in depression.

Explaining My Depression to My Mother by Sabrina Benaim: The poem explains depression, what it feels like and its relation to anxiety. It describes the outcry of depressed persons, the confusion and disarray in their lives.

21 by Patrick Roche: It starts with the death of the poet’s father in an accident due to drunkenness. Then, the poem proceeds with a recounting of events that happened before the tragic event, backward until he was in his mother’s womb.

Shrinking Women by Lily Myers: It’s reflects how societal values affect women. Most times, women watch their diet to maintain a slim body, even if it doesn’t make them happy. But, unfortunately, it also affects their esteem in social places.

This is Not a Poem by Anthony Anaxagorou: It depicts injustice, conflicts, racism, and gender stereotypes. It also shows the poet’s dissatisfaction with such issues.

Wile E. Coyote by Shane Hawley: The poem depicts sociological principles and their importance in various situations. In the poem, Wile E. Coyote appears to understand how the world works.

Pretty by Katie Makkai: The poet talks about fighting against the limitation of the word “pretty” in her childhood. The poem reflects her struggles to look pretty. And finally, the poem hints at her resolve not to qualify her daughter with that word.

Today Means Amen by Sierra DeMulder: It’s an emotional poem, which tells you to be content and make the most of today. It tells people to accept they’re special.

Dear Future Lover by Tasha Receno: It’s a love poem for single people and those who search for love. It describes waiting for love and anticipating a future partner.

The Type by Sarah Kay: It describes the things that encompass being a woman. It reflects how women are type-cast into different roles. It aims to help them break free and love without restrictions.

The Hunger Games by Imani Cezanne: The poet describes the similarities between the movies “The Hunger Games” and the society. The poem reflects poverty and its effects on the African American people. It shows the misrepresentations in the film that are like fantasies.

Brown Boy. White House by Amir Safi: The poet describes his experience growing up in a world that sees you as part of a minority. It’s not easy to meet up with standards that society expects of you.

Love, Sweat, and Tears by Alysia Harris: This poem is emotional and centers on love and passion. But it’s a love story that didn’t last, with only a few moments of passion.

Instructions for a Body by Marty McConnell: It encourages self-love. It tells you to accept your flaws and love your body. Praise it despite the flaws and imperfections.

Unsolicited Advice to Adolescent Girls with Crooked Teeth and Pink Hair by JeanannVerlee: As the name implies, this poem is an advice to girls with a hint of comedy.

To This Day by Shane Koyczan:  The poem explains what it feels like to be young and different. It talks about bullying and the effects it can have on a child. It also explains survival and overcoming stigma.

Friend Zone by Dylan Garity: The poet explains friend zone, including how it made him feel while growing up. It shows that people of the opposite sex can be friends without a sexual attachment.

The Colors We Ascribe by Emi Mahmoud: This poem reflects the hardship people of color endure due to discrimination and conflict.

Slam poetry is a mixture of poetry and performing art. It gives you a chance to discuss societal issues and various subjects that interest you. You also compete against other poets while showing off your artistic abilities.

The examples of slam poetry will help you master the skill and come up with your style.