Differences Between Poem And Poetry: You Should Read This 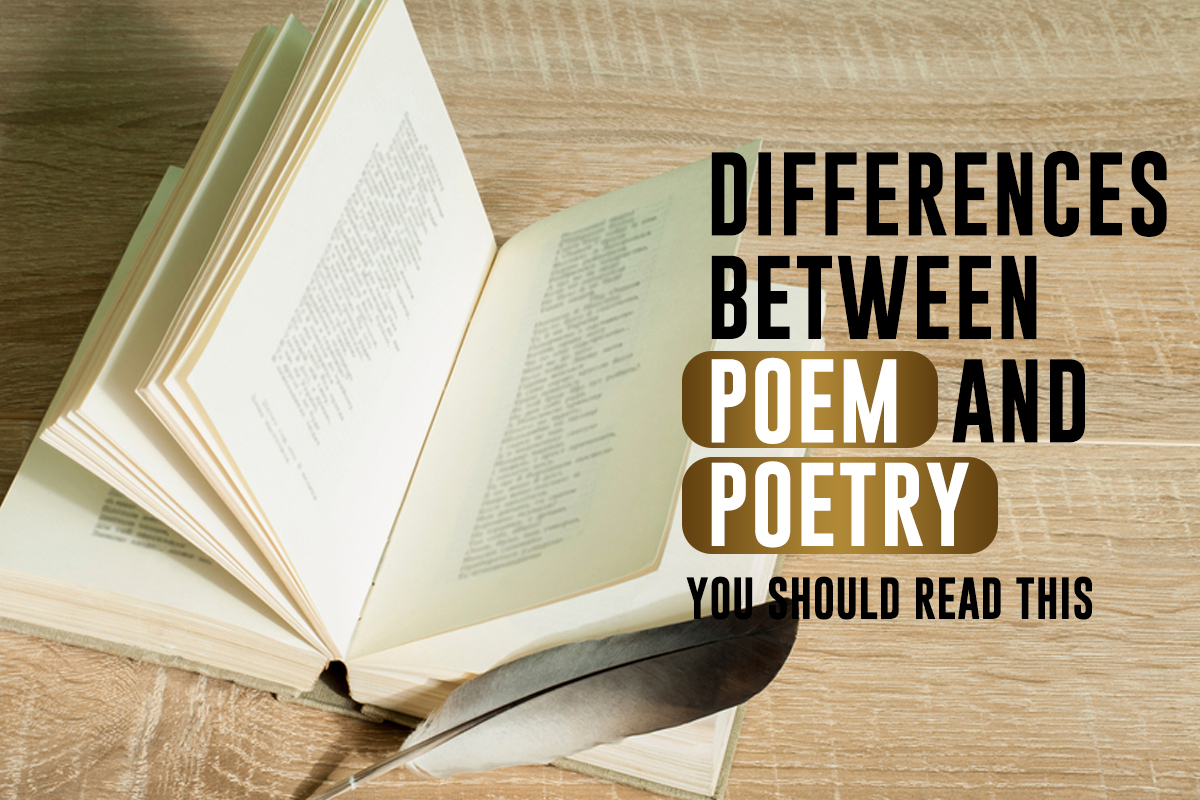 Our history as humans is full of various expressions of art. We have an unlimited taste for beauty and creativity. They can be in paintings, sculptures, novels, dramas, poems, and so on.

However, no matter how they may relate to each other, they have their uniqueness and differences. You’ll see it play out in the relationship between various literary works. They are related but have differences.

In this article, you’ll understand the differences between poetry and poem, including other things related to the topic. So, keep reading!

What Are The Differences Between Poem And Poetry?

The two words are similar and usually replace each other interchangeably. However, to truly explore their differences, let’s understand what they are.

What is poetry? This refers to a form of literature that depends on the use of language to create imagination and emotional response through sound and rhythm.

What is a poem? It refers to a collection of words arranged in stanzas that creates imagination and emotional response through sound and rhythm.

So back to our question, poetry is a form of literature, while the poem is a unit of poetry.

Also, poetry is made up of several forms of poems, while a poem comprises several lines that make up a stanza(s). So it means poems are individual pieces of work, and poetry is a collection of poems.

Furthermore, poems exist within poetry. And so, all the elements, devices, and features of poetry are the same as that of a poem. Hence, even though they have differences, they coexist.

Some elements of poetry include:

Line: This refers to a sentence in a poem that doesn’t necessarily need periods to end it. The arrangement of lines separates one form from the other. But most recent ones don’t conform to the rules. The end of a line creates a break in the poem that pauses its flow. It controls the rhythm of your poem.

Sound: It goes hand in hand with the rhythm of a piece to make it easy to remember. The sound of a poem can be soft, known as euphony or harsh, called cacophony. Examples include skilled minds like sunny skies in summertime (euphony). Childish tales of grumpy attitudes never results in progress (cacophony).

Imagery: It represents ideas or actions in ways that appeal to the five senses. It shows the readers the message of the poem. Also, it creates a mental image of it. It also sparks all forms of emotions. You can use similes and metaphors to enhance your poem this way.

Theme: It’s the lesson the poem portrays. Also, it’s the idea that the poem gives to the readers. It makes it easy for them to get the purpose and meaning of the poem. It can be a story or thought behind the poem.

Symbolism: It’s the use of symbols to reflect one’s thoughts and feelings. It shows an idea differently. It also makes the readers imagine the writer’s thoughts. For instance, the use of “red” can signify blood loss.

Density: It expresses the ability of a poem to share lots of thoughts with a few words. A poem has more density than prose. It’s so because it doesn’t have to use ordinary grammar styles to express a meaning but uses rhythms and sounds. So, it needs just a little space to do this.

However, you don’t have to force your poem to be dense. Let any figurative language you use suit the flow of your work. After writing it, edit to remove any excesses.

Stanza: It’s similar to a paragraph in a story. It consists of lines that are in a group. The group of lines forms the structure of the poem. Also, it varies according to the type of poem. A single stanza can contain two or more lines.

Rhythm: This refers to the repetition of sounds or syllables that are similar. It may contain rhyme. Also, it makes the poem memorable to your audience. It’s the beat of the poem.

However, you can use other means to make a poem rhythmic without rhymes. You can do this by adding words with similar sounds in a single line. Also, you can repeat vowel or consonant sounds in it.

Poetic devices based on word sound:

The devices in this category depend on the sound of the words. They include alliteration, cacophony, euphony, consonance, assonance, etc.

They depend on the description of the words in the poem. They include allusion, irony, allegory, metaphor, etc.

Poetic devices based on rhythm:

They rely on the arrangement of the words and structure of the poem. They also use rhyme schemes and verses.

Use of figurative languages: They describe things in non-literary ways. Figures of speech show and explain the ideas in a poem. Also, they make a poem stand out from ordinary sentences.

Arranged in stanza: You need to understand that poetry use a structure of stanza. The stanzas are usually short, and so you have to read them in a certain rhythm. The author decides the arrangement of the stanzas of the poem.

Descriptive imagery: Poetry paints an image in the reader’s mind. It’s possible because of its descriptive imagery. So, the reader can sense everything the poem describes. Visual imagery is popular but is not the only one. Other senses can also paint a picture.

Contain sound and tone: They’re an essential part of poetry. Poets use various means to adjust the sound and tone of their poems. So, it may give it a sweet sound or a harsh one.

Use different forms and patterns: Poetry has various forms, and that’s why it has varieties of flavor. These forms are numerous, and the author can transform them to his taste. Each one has its distinct pattern.

Poetry is an art, and so is poem writing. They’re so similar that their differences are hard to pinpoint.

However, when writing a poem, ensure that you’re flexible in using the elements and devices of poetry. Doing so will cause your piece to sound more creative and unique.

We hope you now understand what poetry and poem stand for. If you’re seeking to venture into either of them, this post will help you find the right path.

In the world of notebooks, spiral notebooks never go out of style. Despite the existence of digital notebooks, END_OF_DOCUMENT_TOKEN_TO_BE_REPLACED

As an author or publisher, you’re accustomed to using the power of words to captivate your audience’s interest. END_OF_DOCUMENT_TOKEN_TO_BE_REPLACED

An electronic device that embraces portability and functionality, that’s what defines iPads in our world today. They’re a END_OF_DOCUMENT_TOKEN_TO_BE_REPLACED

If you’re looking for a cost-efficient solution for your print projects, you’d want to try publishing your content END_OF_DOCUMENT_TOKEN_TO_BE_REPLACED