Evil Name Generator- Inspire Your Writing With This Tool 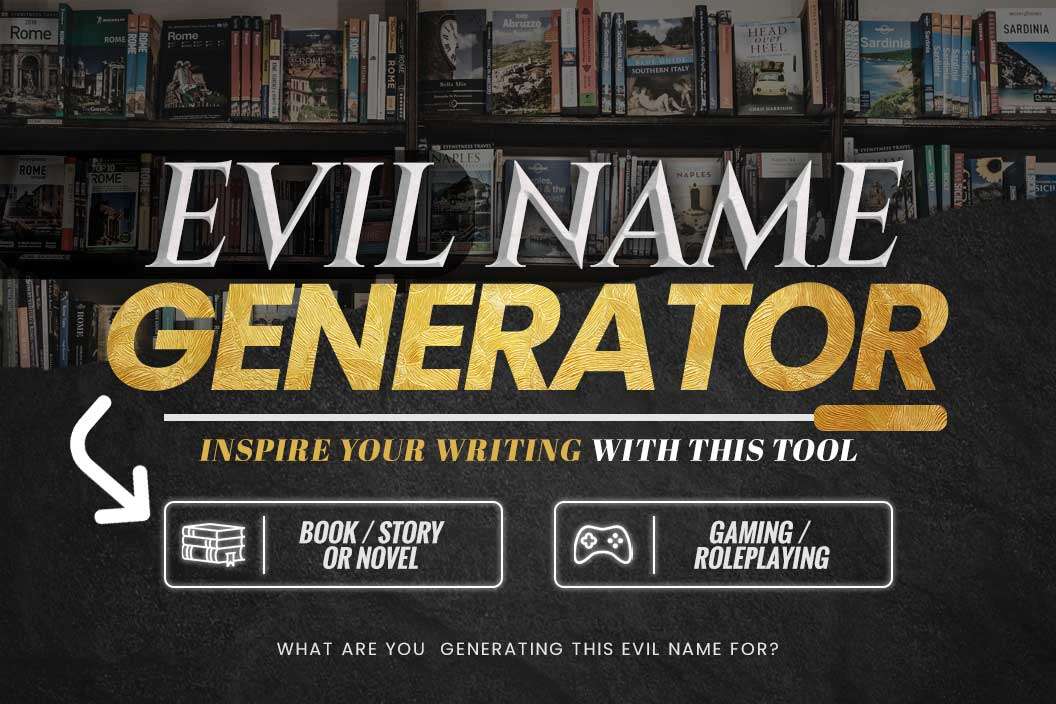 Villain novels are all the rage right now, especially among young adult readers. These novels have gained a large and devoted following across the world.

It may be challenging for a creative writer to put together the right plot. It’s much more challenging to come up with the perfect character names.

The names of characters are crucial. They are the key to deciphering the personalities and motives of the characters in a piece of literature. These names should be fascinating and functional to catch the readers’ interest.

It might be exhausting and stressful to develop a name that fits all criteria. It’s time-consuming, diverting the author’s focus away from the most crucial task: writing the perfect tale. That is where our Evil name generator comes in handy!

The Evil Name Generator will assist you in selecting the most appropriate names for your characters.

Types Of Evil Characters In Novels/Books

Anyone who has ever written a play will admit that it is exhilarating to write on evil characters. These characters might receive so much hate from the audience, but they keep the book interesting and relevant.

The evil genius is the most fun character to write. As the name suggests, they are super intelligent and tactical in planning evil deeds. These characters develop elaborate schemes to wreak havoc on their unsuspecting victims.

Ultimately, their biggest undoing is blabbering their plans to the hero due to their overconfident manner. At times, they tend to fail or get stopped in their tracks due to overly convoluted plans.

The anti-hero is a character that the audience loves and ultimately relates to. The anti-hero is evil due to circumstances rather than as a choice. In most cases, the anti-hero ends up seeing the error of their ways and taking the right path.

An anti-hero can be a bank robber trying to get money to pay for a loved one’s hospital bills. It can also be a Robbin hood character trying to make a positive difference in society. To write a successful anti-hero character, they must appear empathetic to the audience.

In the revenge arc, an evil character tries to get even at a character or the world for how he was treated.

In most cases, these characters only perceive that they were treated wrongfully, but ideally, their perceptions are wrong.

Vengeance arc characters almost certainly end up getting hoisted by their own petard. These characters are too driven by fury to the extent that they are unwilling to look at both sides of the coin. Such characters make for excellent soapbox endings.

The extremist is a character whose drive for their ideologies pushes them to great lengths. They end up inflicting a lot of harm to innocent bystanders or people who fail to buy into their visions. Extremists have a one-track mind and can never be convinced to change.

An example of an extremist character is Thanos, who was so hell-bent on building a sustainable universe that he destroyed half of life in it.

Extreme evil characters do not care who gets hurt in the process of them fulfilling their selfish ambitions.

The jerk swings more towards being annoying than an evil character. Jerks are bullies who take advantage of weaker characters to make themselves feel better.

Jerks tend to come in packs. They form circles to annoy and frustrate people whenever they can.

Bullies usually have a sad backstory. Their behavior and hatred towards other characters stem from being mistreated at home or being the victims of a higher bully. These characters can change under the correct set of circumstances. They tend to be quite insecure.

Henchmen typically act as the muscle. They obliterate obstacles that stand in their master’s way. These sidekicks can sometimes be humorous due to their lack of intelligence and sum-witted nature.

A story can have multiple henchmen, one being the evil character’s second in command.

The chaotic evil character thrives off the disorder. These characters are sly and conniving individuals who pretend to be on a character’s good side. They make stories exciting and unpredictable.

Chaotic evil characters rope the reader in with their charms before some tantalizingly unpredictable plot twists.

Their backstabbing nature makes them unbelievably formidable. They are intended to evoke loathsome emotions and make the reader anticipate the next turn of events.

These are evil characters whose forte is carrying out criminal acts. They include characters such as mafia bosses and other gangsters. A great example of a criminal character would be Al Capone or Bonny and Clyde.

Criminal characters aren’t exactly supposed to have a meteoric rise followed by a cataclysmic fall.

The stories about these characters are intended to portray their lives. They mostly take a documentary-like approach.

These are evil characters from beyond the stars. The stories of evil extraterrestrial characters mainly revolve around conquering the earth and taking it themselves. These stories are intended to amplify the superiority of the human species.

Evil extraterrestrial characters usually are physically and technologically more advanced. They are pretty formidable, but the one thing they lack is an unrelenting spirit. It makes them conquerable despite the low odds of such an event occurring.

These aren’t precisely characters but unprecedented evil natural events. They may be weather anomalies like blizzards and floods. They may even manifest as active volcanoes threatening to consume entire cities or tsunamis.

Evil characters have graced literary works since the advent of writing. These characters are critical to the plot. Fictitious or factual, you will more often than not run into an evil character in the course of your reading.

Here are some of the most prominent evil characters:

Professor Moriarty is one of the best written evil characters. The evil mastermind gave Sherlock Holmes sleepless nights on account of his brilliance.

Though the character inevitably turns out to be a well-orchestrated sham, it is still one of the best portrayals of evil.

Uriah Heep is a character from one of Charles Dicken’s David Copperfield books. He is a loathsome antagonist who has vividly been depicted in the book. He is a character with a massive ego and an unwavering superiority complex.

Zeina is a character from Margaret Atwood’s The Robber Bride. She is a dubious homewrecker who destroys three relationships.

She uses subtle and conniving ways to turn these women into her friends. She does this through her manipulative ways and charm.

Arturo is a character from Katherine Dunn’s Greek Love. Fewer characters can match Arturo’s deceit and ability to manipulate the masses.

Arturo uses his cunning tongue to amass a cult of followers. He convinces these gullible souls to flay themselves to attain purity.

Tom Ripley from The Talented Mr. Ripley is a genuinely deranged fellow. In the book, he murders and assumes the identity of Mr. Dickie. Ripley was upset when Dickie refused to acknowledge his admiration for him.

American Psycho’s Patrick Bateman is a character you would be glad only exists within the book’s covers. Some of his traits include cannibalism, racism, murder, and sadist.

Here are some names that you can use:

Every day, creatives of all levels battle to develop the proper fictitious names. It isn’t easy to come up with fictional names on the spur of the moment, whether they’re writing plays, books, or film scripts. You’ll have no trouble coming up with evil names with the help of the Evil Name Generator.

At the touch of a button, the name generator can provide outstanding name ideas for your evil characters. The writing tool is a must-have for anybody working on an evil character.

Aside from the character name suggestions given in this article, consider using the Evil name generator to create a masterpiece in your upcoming novel, play, or short story.

Also while you’re at it, why not try using our generator of 3d book cover mockup and our story titles builder.

In the world of notebooks, spiral notebooks never go out of style. Despite the existence of digital notebooks, END_OF_DOCUMENT_TOKEN_TO_BE_REPLACED

As an author or publisher, you’re accustomed to using the power of words to captivate your audience’s interest. END_OF_DOCUMENT_TOKEN_TO_BE_REPLACED

An electronic device that embraces portability and functionality, that’s what defines iPads in our world today. They’re a END_OF_DOCUMENT_TOKEN_TO_BE_REPLACED

If you’re looking for a cost-efficient solution for your print projects, you’d want to try publishing your content END_OF_DOCUMENT_TOKEN_TO_BE_REPLACED