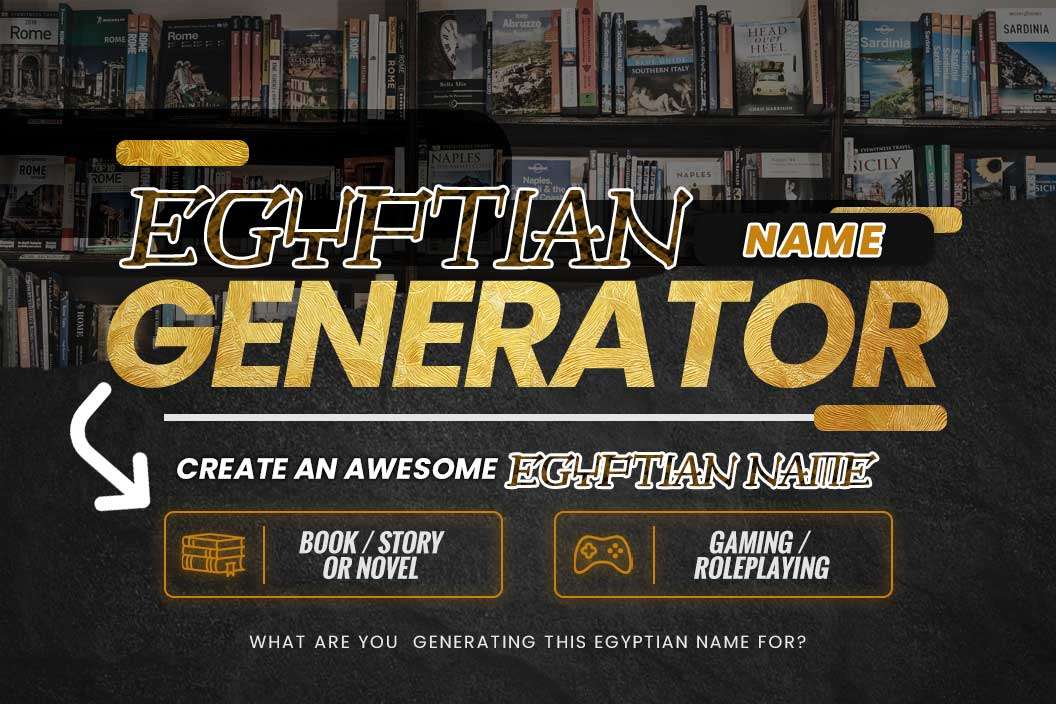 Egypt has a rich history, and the names of her people have always reflected that. Have you ever wondered what your name would be if you were born in Ancient Egypt?

Generating the perfect name for your book is not always easy. If you want to create an exotic Egyptian character for your novel, you’re in luck! It is possible to generate a beautiful name that is 100% Egyptian with this handy Egyptian name generator.

This article will give you a quick look at an Egyptian name generator and the extensive list of cool-sounding, authentic Egyptian names that you can use in your current or future creative project.

Why An Egyptian Name?

Generating a random Egyptian name might seem like a frivolous task, but there are many reasons why you should consider it.

The Egyptian language is beautiful.

It has an elegant sound that makes writing in it a pleasure. Nothing is more thrilling than reading about a character with a name that has meaning in Egyptian culture.

It was common to name babies after their parents, grandparents, or ancestors in ancient times. This tradition still holds in the modern world.

Many parents want their children to live up to a family name that has honor and reflects their history.

Egyptian names are usually a mix of Arabic, Coptic, and French.

The meaning of the name is considered very important, and the name should reflect the person’s personality.

For example, a man named Ahmed, which means “highly praised,” will not be named Ahmed if he is a shy and introverted person.

You get to choose your name, and it’s not just a name but a personality.

An Egyptian name is about choosing a name for yourself and ensuring it reflects how you want your personality to be seen.

Some Egyptian names sound very strange and even funny when translated into English. Many Egyptian names are not derived from English origins like other cultures.

Thousands of names and combinations match almost every taste.

You can find traditional, Islamic, or modern names with a positive meaning or display power and elegance.

Factors To Consider When Picking An Egyptian Character’s Name

Choosing a name for your character is no easy task, mainly when writing a novel. It’s also one of the most difficult ones since we all want to create a unique and cool name but still sounds real and fits into our story.

Whether it be a name familiar in the Egyptian culture like Ahmed or Mohamed or something more uncommon like Zuhair or Ragab, there are specific rules and guidelines to follow when choosing your character’s name.

When you are creating a novel or novella, for example, and you want to write about an Egyptian character, you must know how to pick the right name.

That sounds kind of weird, and it’s not exactly a word you’ll find in any dictionary. However, it’s prevalent for people with specific names to have specific traits in Egypt.

For example, someone named “Ahmed” will almost always have dark hair and handsome features.

One of the most important things to consider when writing in Egyptian Arabic is the choice of words. Like any other language, you have to choose words in everyday use and have a nice meaning and sound.

You don’t want your character to turn out like Icarus and fly too close to the sun!

You have to consider the meaning of the name, its gender, and if you want to give it an Arabic or Western name.

You should be aware of the difference between a first name and a family name. A family name is what you pass down from generation to generation.

One of the critical rules of Egyptian names is that the middle name is given to represent the character’s personality as a whole.

What Makes A Good Character’s Name? What Characteristics Should It Have?

Picking a name for your Egyptian character is not easy. How well you understand your character will affect how well you choose their name.

Below are some pointers that will help you pick a suitable name for your character:

Most Egyptian names are subject to change, depending on how they are pronounced and how each individual pronounces them.

For example, “Ahmed” can become “Amu,” or “Omar” can become “Umar.” But these changes in pronunciation do not affect an Egyptian’s given name.

Male names evoke images of strength, protection, and war. On the other hand, female names refer to personal qualities or a historical figure, often a queen such as Cleopatra. Many famous names nod to personal traits, while others feature weather and gods.

Although it is not mandatory, most people choose to have their first name be 2 or 3 words, with each word starting with a different alphabet letter.

This way, if you meet someone whose last name starts with the same letter as your first name, you will know that you are related to them.

The name Asim is a male name. The word “Asim” means protected or sheltered in Arabic, which is the name of a surah of the Quran. The word comes from the verb “s-s-m,” which means to protect or shelter.

Ur is an Egyptian name for males that means “the Great.” Ur is also known as a variation of Ursula (Greek). There are other forms of Ur, like Ura, Urah, and Uri.

In addition, the name Ur also has the following alternative meanings: “Dawn,” “Sunrise,” and “Primordial Water.”

Omari is a male name. It has Swahili origins meaning high born.

Gyasi is a unisex name and originates from the Egyptian language. The meaning of Gyasi is ‘wonderful.’

Ohisisi is a name used by the ancient Egyptians, who were the first to use it. The word Ohisisi means secret, after the god Osiris.

The popularity of Ohisisi has grown throughout the years. It’s one of the most famous names used by the Ancient Egyptians.

Akila is a name of Arabic origin. It is thought to be derived from the word “akl,” which means “intellect,” and could also mean “clever.”

Dalila is the name of an ancient Egyptian princess; it means “delicate.” It is a very unusual name, rarely used nowadays. However, many Princesses in history were named Dalila.

The first one was the daughter of Ramses II, one of ancient Egypt’s most powerful Pharaohs. She was also the sister of Prince Ramses. When she married Prince Hattusili III of the Hittite Empire, she became Queen Dalila.

Ife means “life, life force, the essence of being alive” and derives from the ancient Egyptian word “ifa.” The female name Ife was prevalent in ancient Egypt, and it is still popular in modern Egypt as well.

Khepri means; the rising sun. It also refers to a god called Khepri in Egyptian mythology. He is often portrayed as a scarab beetle.

There you have it, a simple guide to creating an Egyptian name for your new character!

Whether you’re creating an Egyptian history or fantasy novel or simply writing a story about ancient Egyptians in modern times, the Egyptian name generator should help you find the perfect name for your new character.

You’ll get access to hundreds of brilliant name suggestions with the Egyptian name generator. This tool will make your work exciting and keep the readers excited and willing to follow the plot.

We hope that these tips will help you develop some cool names for your characters and that you’ll enjoy using the Egyptian name generator.

Also feel free to check out our builders for professional-looking cover mockup or book title generator for romance genres.

In the world of notebooks, spiral notebooks never go out of style. Despite the existence of digital notebooks, END_OF_DOCUMENT_TOKEN_TO_BE_REPLACED

As an author or publisher, you’re accustomed to using the power of words to captivate your audience’s interest. END_OF_DOCUMENT_TOKEN_TO_BE_REPLACED

An electronic device that embraces portability and functionality, that’s what defines iPads in our world today. They’re a END_OF_DOCUMENT_TOKEN_TO_BE_REPLACED

If you’re looking for a cost-efficient solution for your print projects, you’d want to try publishing your content END_OF_DOCUMENT_TOKEN_TO_BE_REPLACED