Practically every house has at least one cookbook. Whether it’s a family tradition that has been passed down or something bought at a fundraiser, or just one that really caught the eye of the chef in the home, each cookbook is cherished by those that flip through its pages for delicious concoctions. But with so many recipes out there, and such a large variety of foods, a cookbook is going to have to have a great cover in order to persuade people to try its delicious recipes. 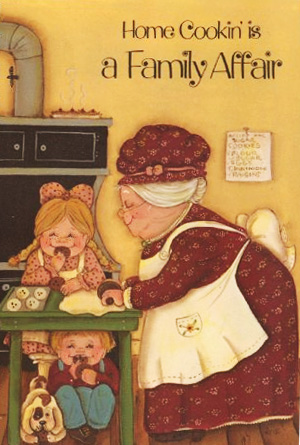 Home Cookin is a Family AffairOften the cooking in a house is done by one person who prepares the family’s meals with love. This cover shows that this doesn’t have to be case, and that cooking can easily become something that the whole family not only enjoys the end product of, but can enjoy the process of as well. With a playful cartoon of two happy children joyously helping what appears to be their loving grandmother in the kitchen, the cover portrays how great it is for everyone to help with the cooking. Even the family dog is happy to participate as it sits next to the young boy on the floor. And if the picture was not enough to encourage someone to pick this book up, then the title definitely helps it along. A carefree font tells readers that home cookin’ (slang intentional) is a family affair; not only does this go perfectly with the well drawn picture, but reminds people in a world of fast food and dine out restaurants, that sometimes it’s just as great to stay at home and make your own meals.

The Happy Herbivore: Lindsay S. Nixon
Many people are trying to live healthier lifestyles now a days, and some of these are accomplishing this by becoming vegetarians or vegans. Unfortunately, without the addition of meat, many vegetarians may feel that they don’t have the kind of variety for their meals that carnivores do. This cover points out the fallacy of that thought process by making it abundantly clear that just because someone chooses not to eat meat, doesn’t mean that they can’t have delicious meals, and thus be a happy herbivore. Right below this positive title is a small fact that is sure to have a huge impact on potential readers: that there are over 175 recipes within this cookbook. With such a huge variety, it would be almost impossible for someone not to find enough meals to keep them happy throughout the week. Just in case the words weren’t enough, the pictures kick start the senses with delicious looking meals that readers can practically smell and taste. Everything on this cover is going to make readers eager to pick it up and try the recipes. 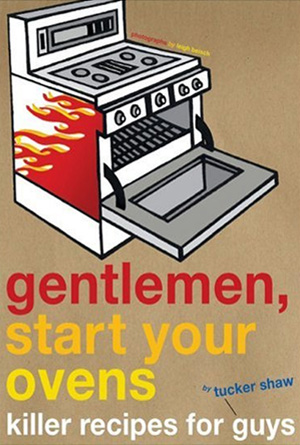 Cooking isn’t just a woman’s activity, and many men enjoy preparing meals for themselves and their family’s just as much as their female counterparts do. Unfortunately, many cookbooks are still geared towards women more than men. That’s why this cover really stands out from others: it appeals to the men out there that really love to cook. It starts by directly addressing all those males that enjoy this activity, but then it continues to keep attention by breaking another stereotype when it comes to cooking. Most of the time, when people think of men cooking, they imagine a guy in the backyard, patiently watching over hamburgers and hotdogs as they cook on a grill. They don’t often picture a guy in front of an oven. That’s why the title and the accompanying picture really reaches out and grabs attention; it breaks that stereotype. And let’s not forget to mention the obvious attention getter of a regular looking oven with racing car-like flame decals down the side. If nothing else about the cover makes someone curious about the recipes, that alone should raise more than a few eyebrows. 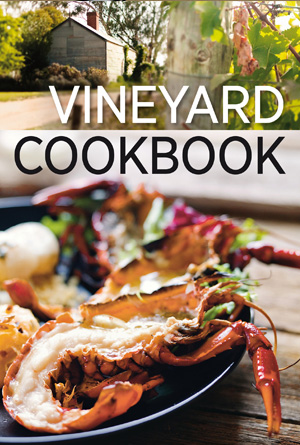 Vineyard CookbookThis cover has been made to directly pique the interest of those with a defined palette, and who really know how to enjoy a good wine with their meals. Because this is not going to be the kinds of meals that everyone is used to cooking, this cover already stands out from those around it. The succulent ingredients on the plate featured in the foreground of the cover elicit a prescribed response in potential readers as their salivary glands respond to the visual stimulation. The picture continues to entice potential buyers with a scenic background that takes over the upper portion of the cover, further adding to the eloquence that is being offered with these recipes. Then, people are finally going to see the title and really be pulled in. The word “vineyard” brings to mind specific images of fancy meals, tasty wines and good company. It doesn’t matter if someone is used to fine dining every day or only occasionally, the overall effect of pictures and words that this cover creates is going to make it enticing enough for anyone to want to pick up.

In the world of notebooks, spiral notebooks never go out of style. Despite the existence of digital notebooks, END_OF_DOCUMENT_TOKEN_TO_BE_REPLACED

As an author or publisher, you’re accustomed to using the power of words to captivate your audience’s interest. END_OF_DOCUMENT_TOKEN_TO_BE_REPLACED

An electronic device that embraces portability and functionality, that’s what defines iPads in our world today. They’re a END_OF_DOCUMENT_TOKEN_TO_BE_REPLACED

If you’re looking for a cost-efficient solution for your print projects, you’d want to try publishing your content END_OF_DOCUMENT_TOKEN_TO_BE_REPLACED