Even for those that are not very interested in history, there are certain names that just ring recognition.  These are people that have made such a huge impact on history, that even if modern day people know nothing about else about them, their name has become a familiarity.  Because of the course of human history, women have only recently become equals to men.  That is why books about historic women are so attention grabbing on their own.  They take a subject that is not only well known, but one that was able to overcome the odds of their gender to make a mark on history. 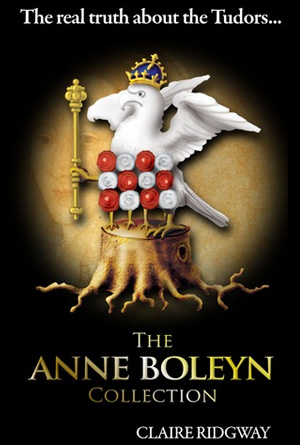 Anything that begins with “The real” is going to automatically grab attention. People are so interested in what really happened; what conspiracies throughout the ages have kept the truth hidden, what documents have been destroyed, which stories have been forever silence by death? And then to find out that this book is offering “the real truth” about one o the most influential families in European history, makes that one line an incredibly effective part of this cover. Readers almost don’t need the title, which tells them the main focus of this particular tell-all, another famous woman of history: Anne Boleyn. The picture that dominates most of the cover illustrates a strange combination of images: a white bird with its head high and hold a scepter, crowned as royalty. It stands on a dead tree trunk, whose symbolism may only be known by those already familiar with the Tudor family. The same goes for the red and white checkered pattern in front of the bird. Either history fanatics will be pulled by the symbolism, or curious people that are unfamiliar with this family, and this woman, will be insanely curious as to what these images mean. Altogether, this is a successful cover, because it will draw readers that are old and new to the Tudor the legacy. 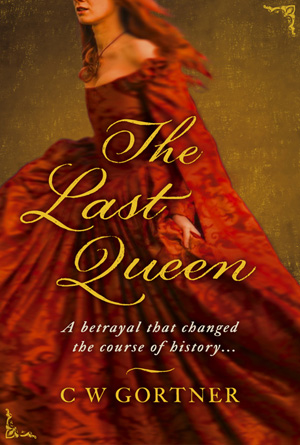 Readers don’t have to know who this particular book is about to be enticed by the cover. There are two possible parts that will catch their eye first: the woman in the background, or the title in the foreground. The title is elicits curiosity because obviously there is still a queen living today, so why is this woman considered to be the last queen? Then the subtitle immensely adds to this curiosity by telling readers of a betrayal, and that this betrayal was so incredible, it actually changed the course of history. That is a pretty incredible promise to potential readers, and if they aren’t intrigued enough to flip through the pages yet, the image of the woman behind the title is sure to have the cover cracked open. Obviously the queen of the title, an apparently young woman, dressed in red with fiery hair to match, holds her dress as she seems to be running from something the readers can’t see. Her face is only half revealed, but that is enough to see the raw emotion that she portrays. A simple image, yet so compelling, and combined with the thought provoking title make this a truly effective cover.

Joan of Arc: Marcia Quinn NorenJoan of Arc has been the subject of multiple books, movies, plays and other forms of creative entertainment. Even if potential readers know nothing else about her, they know that she was an incredibly inspirational woman. That information is enough to make them pick up this book, because the cover has made a beautiful illustration of one of history’s greatest legends. The woman on the front, obviously Joan of Arc, is dressed in metal armor, holding a sword close to her; an image that was never seen because a woman’s place was in the home, not the battlefield. Joan of Arc is framed by stone archway, with the night sky as a background. The three stars that seem to hover around her and the light that reflects on her armor, coming from somewhere unseen, gives her a divine appearance. The subtitle adds to this image by telling the reader that this story of “The Mystic Legacy”. This stunning image, with very little help from the title, will make readers eager to learn more about this iconic woman. 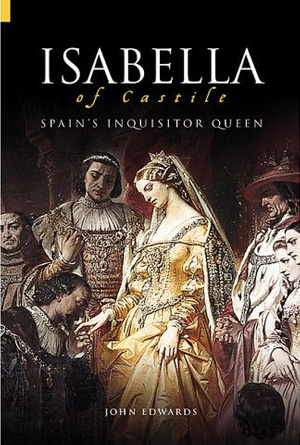 Isabella of Castile: John EdwardsChristopher Columbus found America in 1492; this is a well known fact. The queen that sent him on his way was Queen Isabella, and much less is known about her. That is why this cover relies on its ability to spark interest, rather than hoping people will recognize the name of the woman that was responsible for an entire country. The two biggest attention grabbers on this covers are the subtitle and the woman brought into focus in the image. Readers are likely to see the woman first, who seems to glow from he own inner light, standing apart from those around her. She is beautiful, royal, elegant and respected. She captures…no she demands attention from those who pass by, and that includes potential readers. Then there is the subtitle, almost lost in the dark background, but sticking out just enough to spark curiosity and other emotions when read. One word stands out: inquisitor, bringing to mind images of torture that were synonymous with the Spanish Inquisition, and starkly in contrast with such a picture of beauty that is the woman in gold. This cover captures the imagination by poking at curiosity, making it very successful.

In the world of notebooks, spiral notebooks never go out of style. Despite the existence of digital notebooks, END_OF_DOCUMENT_TOKEN_TO_BE_REPLACED

As an author or publisher, you’re accustomed to using the power of words to captivate your audience’s interest. END_OF_DOCUMENT_TOKEN_TO_BE_REPLACED

An electronic device that embraces portability and functionality, that’s what defines iPads in our world today. They’re a END_OF_DOCUMENT_TOKEN_TO_BE_REPLACED

If you’re looking for a cost-efficient solution for your print projects, you’d want to try publishing your content END_OF_DOCUMENT_TOKEN_TO_BE_REPLACED