Church history books include books dealing specifically with the history of the church and extend to books on subjects related to the history of Christianity. For this reason, cover designs in this category vary depending on what a particular book focuses on. For books that specifically focus attention on the history of the church, paintings depicting biblical characters or events are commonly used as cover artwork. Below are various examples of books that fall within the category of church history to show different approaches to cover designs depending on the book’s subject.

1. Church History, Volume One: From Christ to Pre-Reformation: The Rise and Growth of the Church in its Cultural, Intellectual, and Political Context by Everett Ferguson 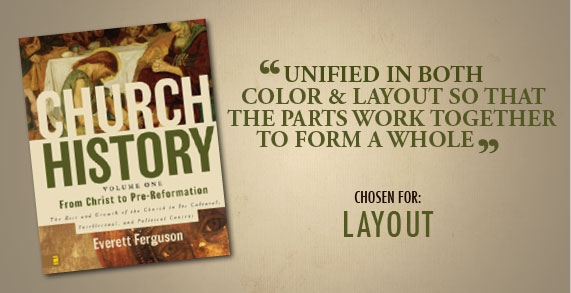 Church History by Everett Ferguson is an excellent example of a cover that incorporates fine art depicting a biblical scene. The cover design is unified in both color and layout so that the parts work together to form a whole.

A great feature of this book cover is:

Layout – The layout of this cover is unique in that it incorporates two images and does so without disrupting the flow of the layout. The first half of the title overlapping the top image also adds a creative way to unify all the elements in the design. In addition, the solid block of color containing the second half of the title and subtitle provides contrast and allows the text to be read easily between the two paintings.

2. The Patriarchs: Encountering the God of Abraham, Isaac, and Jacob by Beth Moore 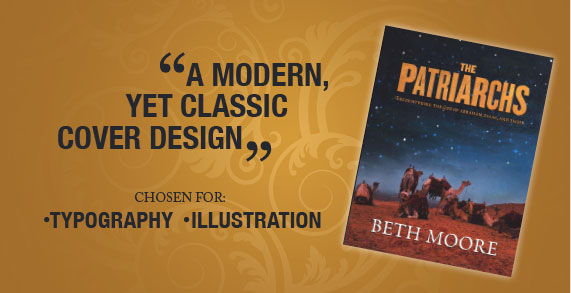 The cover of Beth Moore’s The Patriarchs is a modern, yet classic, cover design for a church history book that provides a study of Genesis 15-20, focusing on God’s plan and relationship to man as revealed through the lives of the patriarchs. Excellent typography and a beautiful illustration both play a role in making this a successful cover design.

The best features of this book cover are:

Typography – The cover design of this book excellently handles making the title stand out. For one, the text is large and easy to read. In addition, the gold color stands out wonderfully against the dark blue background. The subtle designs behind the title and author’s name also bring attention to the text on the cover.

Illustration – The illustration used on the cover is both fitting for the book’s content and overall a great illustration for a cover. The colors work well and the details in the illustration are contained in a central area so that the text does not get lost in the artwork.

3. Interrupted: An Adventure in Relearning the Essentials of Faith By Jen Hatmaker 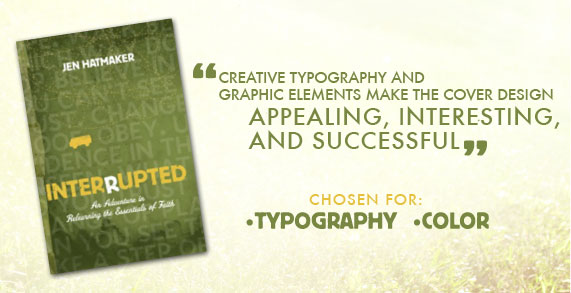 The cover design of Jen Hatmaker’s Interrupted is effective in representing both the title and subtitle of the book. Creative typography and graphic elements make the cover design appealing, interesting, and successful.

The best features of this book cover are:

Typography – The use of typography to depict an idea or concept was exceptionally handled in the title of the book. The white “R” out of line with the rest of the title clearly portrays the idea of an interruption within the word itself. The opaque text in the background also adds a creative element while displaying words related to the book’s content.

Color – Although only two main colors have been used on this book cover, they are bright and bold, making the cover one that would easily stand out on a shelf. The arrangement of colors in the design is also what makes them so successful. The yellow car placed off-center and the white “R” in the middle of the title both stand out and provide a good variety of the color placement.

4. Shadow of the Almighty: The Life and Testament of Jim Elliot by Elisabeth Elliot 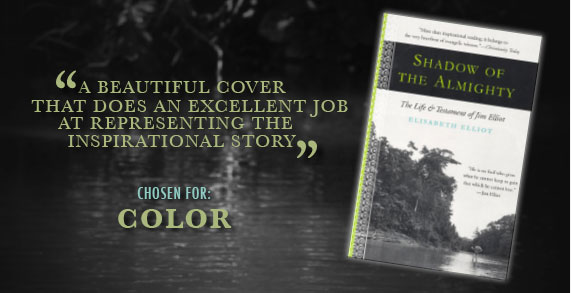 Elisabeth Elliot recounts the death of her husband, Jim Elliot, and four other missionaries by the Auca Indians in her book Shadow of the Almighty, revealing his life of commitment to God and inspiring many to live in light of his example. The book has a beautiful cover that does an excellent job at representing the inspirational story that has become so momentous to modern-day Christianity.

The best attribute of this book cover is:

Color – The black and white photograph of Jim Elliot in the Curaray River is enhanced by the subtle hints of green in the title and along the left side of the cover. Elisabeth Elliot’s name in light blue also brings a touch of color to the primarily black and white cover. While a black and white cover would have been suitable, the light use of color makes this cover one that is especially pleasing to the eye.

In the world of notebooks, spiral notebooks never go out of style. Despite the existence of digital notebooks, END_OF_DOCUMENT_TOKEN_TO_BE_REPLACED

As an author or publisher, you’re accustomed to using the power of words to captivate your audience’s interest. END_OF_DOCUMENT_TOKEN_TO_BE_REPLACED

An electronic device that embraces portability and functionality, that’s what defines iPads in our world today. They’re a END_OF_DOCUMENT_TOKEN_TO_BE_REPLACED

If you’re looking for a cost-efficient solution for your print projects, you’d want to try publishing your content END_OF_DOCUMENT_TOKEN_TO_BE_REPLACED