Book Covers of Literary Classics from the 20th Century

The 20th century saw massive changes in the world around us. In 1901, we hadn’t had two world wars yet, we didn’t have the internet, and we didn’t have computers. The population was more than a billion people smaller and life was much simpler. These five books, all of which are considered among the greatest books of all time, speak to the time period in different ways. Each is a unique portal into a time that is gone, but not forgotten. 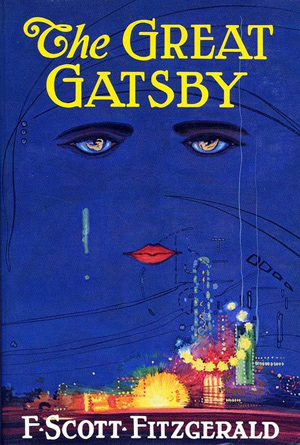 For those that recognize the title, they’ll see the captivating eyes and pursing lips of a flapper, a woman of the 20s with the outline of the iconic hat around her head that usually framed a bobbed hair cut in defiance to a male-dominated society. For those that have never heard of The Great Gatsby or F. Scott Fitzgerald, they will be drawn by the seeming sadness in those golden reflecting eyes, the tear that seems to be falling down the invisible face, and the wild, bright lights that are illuminating the scene below. Even though most of this cover has been taken over by a plain, dark blue color of an evening sky, the few details that are standing in contrast do a magnificent job of drawing in the reader with either familiarity or curiosity. Either will do the job of grabbing a passer-by’s attention. 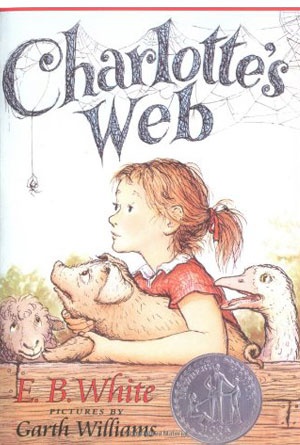 Classic children’s books have a life of their own, as they enchant generation after generation with their tales. Charlotte’s Web is no exception, instead excelling in its continued ability to fascinate readers, young and old. For those familiar with the story, they will recognize the picture before they even bother to read the words. The red-haired child gently holding the young pig; they are obviously on a farm with the wooden fence in front of them, the goose and sheep behind them. And then of course there is the infamous spider, barely taking up any space on this cover and yet she has the full attention of everyone in the picture, as well as everyone that picks up this book. Such a beautiful illustration that is able to bring a smile to anyone’s face, no matter what their age. Children will love the colors and the animals, perhaps even the elaborate spider web that has taken over the upper right hand corner. Adults will become nostalgic with fond memories of the story, or if they are picking it up for the very first time, become fascinated by how much presence one tiny little spider commands. And if anyone isn’t convinced yet to start reading, the seal of an award will persuade the adults, while the information at the bottom telling readers that this author also wrote Stuart Little, another familiar and lovable character, will convince the younger crowds. 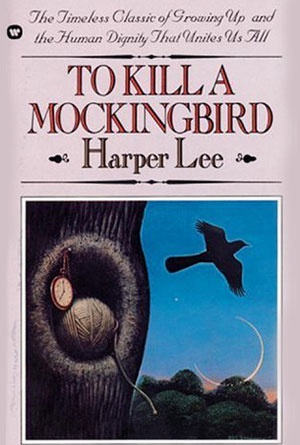 To Kill A Mockingbird by Harper Lee

This is one of the classics that is sure to last through the ages. This cover has a wonderful plethora of elements that really come together to make it a classic just like the story that it enfolds. The pale violet color of the background has a calm and soothing effect on those that pass by, until they read the title. Those that recognize it, which is a very large percentage of people, will be jarred by the extremity of the title next to the pale colored background, and even to the group of objects that graces the boxed illustration. The bird, presumably a mocking bird, flying gracefully across a cloudless evening sky; the practically new moon rising over the horizon while one single star shines brightly; in the foreground an old tree keeps safe two objects that don’t seem like they should go together, a pocket watch and a ball of yarn. Everything about this image is calming, peaceful, just like the background. And it is just as jarring against the title. The words at the top help to illuminate a small bit about the story that is waiting to be told, but readers are drawn to open the cover and find out more. For those that have read it a dozen times and those that have never laid their hands on it before, the cover will draw them in, captivating them, and the story will be told. Lord of the Flies by William Golding

Most coming of age books do not entail the incredible events that take place in Lord of the Flies, and that fact is what makes this book stand out as one of the best books of all time. The incredible artwork is what makes it stand out from every other cover in the bookstore. Regardless if readers are familiar with this classic or not, by passing it on the bookshelf, it would be impossible not to notice the brilliant use of color in the illustration. The title and author are placed out of the way at the top, because their information isn’t as important, or as informing as the strange picture of a boy that dominates the rest of the cover. He is obviously young, and yet he looks so serious, older than his physical years. He is obscured in darkness and the greens of wild and strange plant life, adding a touch of mystery and the exotic to the cover that easily captivates readers. The flies gathering in the corner make it apparent that this boy, whoever he is, is the lord of the flies, but nothing else is known about him. In order to find that out, and learn more about the young boy with the old soul, they are drawn in to pull this fantastic cover aside and get to the story within.

In the world of notebooks, spiral notebooks never go out of style. Despite the existence of digital notebooks, END_OF_DOCUMENT_TOKEN_TO_BE_REPLACED

As an author or publisher, you’re accustomed to using the power of words to captivate your audience’s interest. END_OF_DOCUMENT_TOKEN_TO_BE_REPLACED

An electronic device that embraces portability and functionality, that’s what defines iPads in our world today. They’re a END_OF_DOCUMENT_TOKEN_TO_BE_REPLACED

If you’re looking for a cost-efficient solution for your print projects, you’d want to try publishing your content END_OF_DOCUMENT_TOKEN_TO_BE_REPLACED