Readers and writers acknowledge that any fictitious narrative takes time to finish, whether that means reading or writing END_OF_DOCUMENT_TOKEN_TO_BE_REPLACED

Science fiction and fantasy-focused literature often fall under the “despised, marginal” genre that most readers and writers neglect. END_OF_DOCUMENT_TOKEN_TO_BE_REPLACED

Many famous writers get recognized at some point in their careers. As for Emily Dickinson, one of American END_OF_DOCUMENT_TOKEN_TO_BE_REPLACED

Biographies pretty much sell themselves, as anyone who is already interested in a particular person is likely to go searching for their biography. The trick comes when you have someone famous enough that more than one author has taken it upon themselves to write a biography. Then they have to compete with one another to have their bio read instead of the next one. Interesting covers can give a competitive edge. 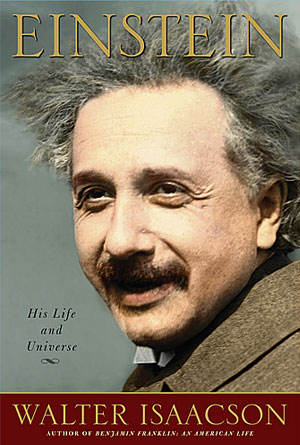 Albert Einstein was so incredibly important to the scientific community, and to the world as a whole, that it’s pretty safe to say that almost anyone has at least a vague idea of who he was. This familiarity with the subject already gives an edge against books about other, less known people, but it comes with its own unique problem. Because Einstein is so well known, there are likely to be more people wanting to write his biography. This cover has a great edge against the competition for several reasons. The first, and likely the most eye-catching, is the fact that almost all pictures seen of Einstein are in black and white. This cover image has a color photo that immediately captures the attention of the reader. The photo itself helps to keep that attention, with a candid shot of the genius smiling, his iconic crazy hair standing on end. The words in the corner add just a tiny bit of intrigue, talking about not only his life, but his universe. Altogether, this cover is sure to win out over any competition when it comes to being the best attention getter. 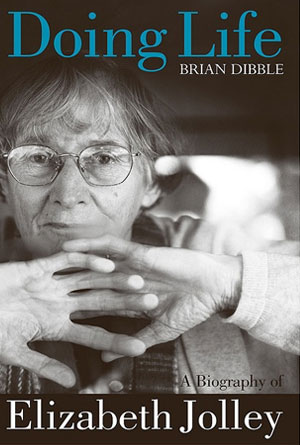 Doing Life A Biography of Elizabeth Jolley by Brian Dibble

Sometimes a book can stand out just be being the most simplistic of the bunch. This cover takes this approach with a simple, black and white photo of the person of interest that takes over most of the available space. It is this picture of this woman, seemingly staring at the reader, with hands posed in front of her, that becomes so immediately captivating and gently pushes the reader towards opening this intriguing cover to learn more. The simplistic effect is continued with the plain font in easy to read colors; the white against the black background and the black against the grey of the photo. The blue of the title is easy on the eyes, and stands out just enough to continue that eye-catching effect without being too overwhelming. This cover has come together perfectly so that even for those who are unfamiliar with its subject, they are captivated enough to pick it up and at least learn a little more.

Steve Jobs has been one of the most influential people in our modern world, bringing a slew of technology that has come to be depended on by millions of people worldwide. It’s no surprise to see multiple biographies on him, but why does this particular cover stand out? Well, first of all it uses a powerful image of Jobs, one that looks as if it were taken mid-speech, maybe even at a lecture of some kind. It gives the cover the illusion of movement, something that will capture attention whether someone is looking at it head on or only sees it from the corner of their eye. Secondly, the huge orange block in the middle of the cover makes it impossible not to see this book. Orange in itself is an unusual color, not seen very often and so when it is used, the human eyes pick up on it quicker. The word inside this orange box adds to the attention grabbing capability of the cover, playing on a well-known merchandise name associate specifically with the person of interest, and twisted to not only show familiarity with this person, but to show how important they were. The word “icon” is not thrown around lightly, after all. And then of course there is the little tidbit of subtitle that really pushes the book to the reader, adding that little bit of intrigue to get them to pick it up and buy: “The greatest second act in the history of business” is pretty hard to ignore, making it a great final piece to the success of this cover. 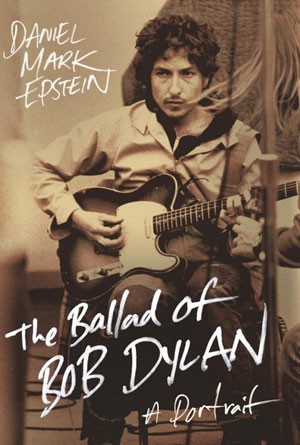 The Ballad of Bob Dylan by Daniel Mark Eastein

This is just an incredible book cover that not only grabs the attention of the potential reader, but really gives tribute to the person whose life unfolds through the pages within. The photo is intense yet laid back, showing Dylan with his guitar and looking off into the distance. The sepia tone gives age to the picture, taking people back visually before taking them back mentally. Even the font of the words adds to the overall effect, looking almost as if they were actually written in a carefree hand instead of typed on a computer, and adding to the carefree feel of the entire cover. For fans and non fans alike, this cover is sure to grab onto their attention and not let go, not until they at least take a closer look. 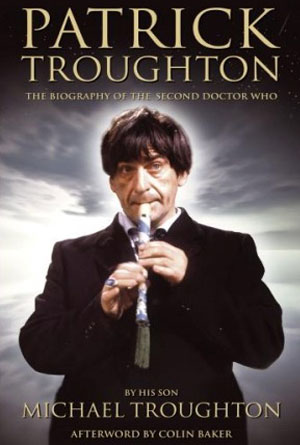 Not every biography is going to be about a well-known person that any passerby is going to recognize, either by face or by name. In fact there are thousands of biographies out there that are catered to a specific group of people, to better inform the select few that have an interest in a certain individual. Not every bio is about rock stars, movie stars or great historical figures, but that doesn’t mean that other biographies have any less importance. It only means that their covers have to work twice as hard if they want to really be seen. This cover is a great example, as Patrick Troughton is likely not a very popular name among most people. So in order to gain the attention of those that aren’t familiar, the cover designer has created something that really leaps out and snatches the attention of those passing by. The man on the front, playing some kind of instrument is only the centerpiece of an extraordinary cover. He is surrounded in a slight, almost angel-like aura that actually sends out piercing bits of light in a few directions. Behind him is a strange diamond design that almost looks archaic, maybe even symbolic. In order to find out exactly what it is, the reader is just going to have to look a little closer, maybe read a few pages. Then it is the author’s job to keep the attention that the cover has so successfully gotten.