Angel Name Generator For Your Next Book 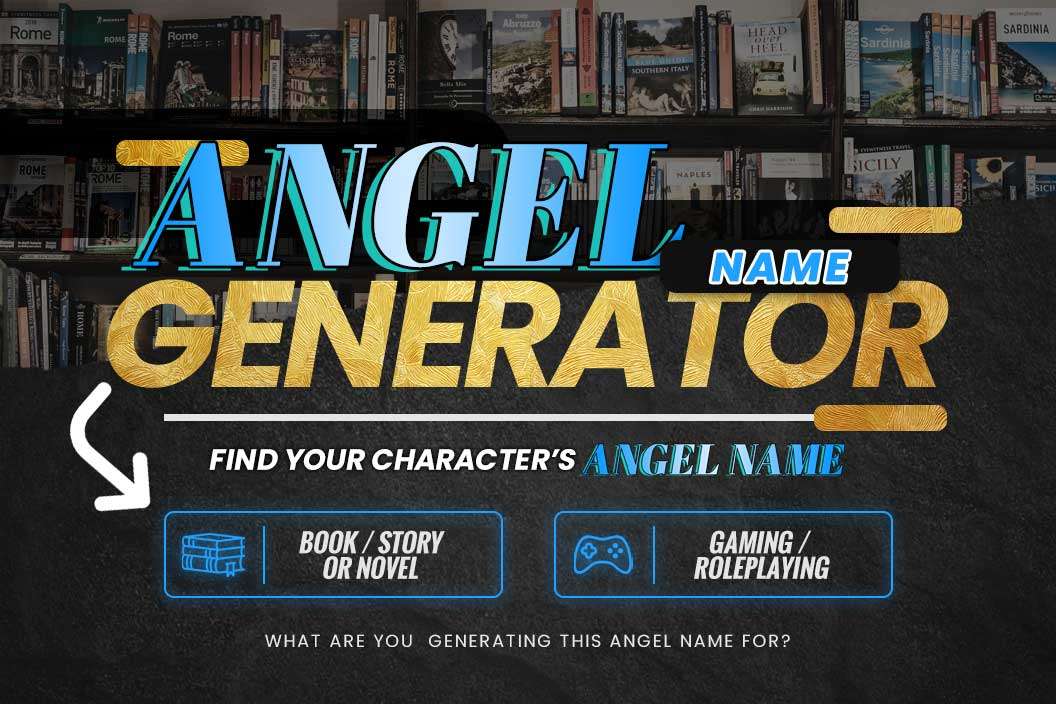 Writers know how important the names of their characters are. And because of this, they tend to get hung up on thinking about names at the beginning of their writing process. Sometimes, this takes so much time and effort that it drains you of your creative energy. With the help of our Angel Name Generator, writers and authors alike need not worry about spending multiple hours or days just to generate names. Instead, an angel name generator will do most of the work with just a simple click. With this, you can maintain and focus your creative energy in developing your story into an awesome book –– one that will leave lasting impressions.

Religious and Cultural Origins of Angels

Humans have always been interested in the existence of celestial beings, and among these are the angels. Throughout history, they appeared in our literature, paintings, statues, etchings, figurines, and other media. This is mainly because angels have played a significant role as intermediaries between God and humanity across several religious scriptures. In Christianity, they played a role as messengers and guardians to prophets and other biblical characters. In Islam, they are all believed to serve God faithfully. While in other beliefs, some angels are faithful to God, while others have rebelled against him.

Despite their religious origin, angels have become more secular in recent years. Books other than religious texts have been published, both fiction and non-fiction. Popular television movies and series have also been produced such as “Lucifer” (2016-2021), “Touched by an Angel” (1994-2003), “Supernatural” (2005-2020), and the list goes on. With this secularization, the need for Angel Name Generator gradually arose.

The first few verses of Ezekiel in the Christian Bible describe the appearance of angels.

Two other passages describe these angels as cherubim in Ezekiel 10:20 and Genesis 3:24.

How Many Angelic Beings Are There?

The exact number of angels is not known.

In the Bible alone, there are about 273 verses mentioning angels and other celestial beings; however, it is difficult to estimate how many angels there are in existence because they do not reside on Earth.

Things to Consider When Writing Angels into Your Stories

The word “Angel” comes from the Greek word Angelos which literally means “messenger”. Just like the meaning of the word, angels are created to bring the message of God to the people on behalf of God Himself. Just like the ambassadors that we have that represent the country we are in. Likewise, angels’ jobs revolve around serving God and bringing His message to the people.

Here are some additional points to consider when writing about angels:

They do not have human bodies, so they don’t have all humans’ physical needs. They don’t eat food or drink water. However, they can assume human forms. And if they want, they can choose to eat, drink and sleep as we do. An example is given where the Lord and two other angels took the human form of men and went to Abraham’s house where he, Abraham, invited them for a meal.

Like humans, angels are also beings created for the purpose of serving the One and Only Creator of all things. Yes, they are mighty, powerful, and direct messengers of God, but these beings are made as fellow servants alongside all human creations. In the Biblical Scripture, an angel of the Lord stopped John when he was about to fall down and worship at his feet. The angel immediately stopped John and responded that he is a fellow servant who serves the same God as John.

In the angelology of different religions, we can note that angels do have a ranking system. If you read books on Judaism, it is established in the Hebrew Bible and Jewish literature. In Christianity, there’s not enough scripture in the Bible supporting the exact ranks of the angels as Dionysius has described. But, it is definitely mentioned that there are archangels and leaders of the angelic army (Jude 9 and Revelation 12).

Good and evil beings have fought since the dawn of time. The ancient books are filled with how these fallen angelic beings were expelled from Heaven to Earth. The Bible says that Lucifer was one of the first fallen angels.

The first angels fell from Heaven because they desired mortal life. It is said that they were cast down to the Earth because they took on human form to perform sexual acts with humans. This act was deemed a sin against God, leading to their expulsion from Heaven.

These angels, sometimes referred to as “fallen angels,” were forced to live on Earth, never returning to Heaven.

Their expulsion occurred after a great war in Heaven, but their descendants still live on Earth, having survived through the ages in secret societies and magic lodges.

Demons are always fallen angels cast out of Heaven with Lucifer. They can inhabit human bodies, but they can only possess them quickly before destroying them through possession.

The myth of these fallen angelic beings has since become a popular fiction topic, including movies and books.

Most of the angel names that we know now originated from the Christian and Hebrew testaments. In the book of Revelation in the Bible, it says, “Then I looked and heard the voice of many angels, numbering thousands upon thousands, and ten thousands of times ten thousand.”

Based on that, even if we don’t know exactly how many angels there are, it is safe to say that an exceedingly large number of angels exist! This could be why the Catholic Church gave considerable effort in describing and discovering angel names. And by now, even laypeople create these names based on their imagination, juggling the Hebrew alphabet, and most of the time adding the suffixes “-el” or “-irion”.

Kickstart your story with our Angel Name Generator! In just a few clicks, you’ll meet the perfect Angel names for your story. Also, the generator is very simple to use.  So, if you don’t like the name it generates, you can tap on the button several times until you find the name that perfectly fits the character you have in mind.

So, there you have it! When it comes to angel names, you have a lot of options! Angel names can be fun to find and use as inspiration for your own character’s name. This Angel name generator is just one way you can do this. This generator can provide creative and practical angel name suggestions.

Now that you know how to find your angel’s name, why not give it a try or consider using the Angel name generator in your upcoming work? It could be your next best-selling fantasy!

Did you find our Angel Name Generator helpful? Here are more generators to help you create characters and stories:

In the world of notebooks, spiral notebooks never go out of style. Despite the existence of digital notebooks, END_OF_DOCUMENT_TOKEN_TO_BE_REPLACED

As an author or publisher, you’re accustomed to using the power of words to captivate your audience’s interest. END_OF_DOCUMENT_TOKEN_TO_BE_REPLACED

An electronic device that embraces portability and functionality, that’s what defines iPads in our world today. They’re a END_OF_DOCUMENT_TOKEN_TO_BE_REPLACED

If you’re looking for a cost-efficient solution for your print projects, you’d want to try publishing your content END_OF_DOCUMENT_TOKEN_TO_BE_REPLACED