Are you having a hard time coming up with superhero names in your superhero fantasy novel or comic? No worries! In this article, we are going to cover a couple of effective superhero name writing tips. We are also going to feature our very own Superhero Name Generator for those who want to generate random superhero names.

These will surely help fantasy authors everywhere in their creative writing process, so make sure you read until the end of this article!

Before we start, we would like to point out that your superhero names do not bear that much weight when it comes to getting published. Overall, it’s your writing flow and unique storyline that will make you stand out.

Nevertheless, character names have a critical role when it comes to evoking emotional responses from readers as well as defining characters in your story.

Although you can pretty much rely on your own creativity, some theories serve as guidelines when it comes to writing your superhero character names.

You don’t really have to follow these tips down to the last word. However, they can be a helping structure, especially when you’re at the point when your brain is coming up blank.

Here are some tips and inspirations when coming up with a superhero name:

When you look at the name The Punisher, you know exactly what that character wants to accomplish. This tip is also useful when determining superhero team names. Good examples are The Avengers and any superhero team with the name “Guardians” in it.

Take a chip out of the character’s origin story 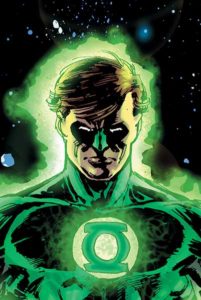 Naming your superhero based on his or her origin story can be emotionally-evoking to your readers. You can pick a relevant point in their backstories. You may also come up with words or terms that can symbolize that particular part of their history.

For example, Green Lantern got his name from the source of his powers. The name is unique, symbolic and also reminds readers of the organization Green Lantern is associated with.

You don’t have to be completely literal when naming your superhero characters. You can choose something that is symbolically or thematically appropriate, like Captain America.

Captain America is a good name for the character. Why? Because of his primary skills, which are fighting and throwing his adamantium shield to hit his opponents. Compared to the military angles explored in his story, his skills aren’t that important.

The same goes for Oracle. Although she can’t predict the future (as what her name implies), her name still makes sense to her story. That is because her main job is to provide assistance and information.

Incidentally, you can also choose to skip or gloss over the symbolism behind your superheroes’ names.

Look at your character’s distinguishing personality or mental traits

Take a gander at Rorschach, one of the main characters of DC Comic miniseries, Watchmen. Some think that his name came from the similarity of his mask’s appearance with the ambiguous designs used in Rorschach inkblot tests.

Although that fact is somewhat true, the true meaning of Rorschach’s name came from his belief of moral absolutism, which means he views good and evil as pure ends with no shades of grey.

His black and white-colored mask also depicts his sense and view of morality.

If you can come up with a character name such as Rorschach, it will prove to be very useful to your readers!

Stick with your character’s given name

If you tried every tactic and nothing seems to work with your superhero in mind, you can always go with your character’s real name in the story. One example of this is Luke Cage.

He’s a superhero but chose to retain his own given name. It’s up to you how you can mold your character’s name into like a brand or symbol, and with Luke Cage, it proved to be effective. That’s why it isn’t a wrong direction to go with real given names.

Your superhero name is what defines your character. We mentioned above that your characters’ names do not mold your chances of getting published in a significant way. However, it still wouldn’t hurt to abide by some writing rules to create a more productive, gripping story.

Here are some superhero name writing mistakes that you should avoid:

As much as possible, limit your superhero characters’ names to only three syllables. It has been proven over time that names that are too long to read or spell can irritate your readers.

If your character’s name has a tag, then a five-syllable name would suffice. Some famous examples include Mr. Fantastic and Dr. Jekyll.

In your mind, you may have gone to long lengths to think of a character name that you believe is symbolic or figurative, when in real life, your readers can’t appreciate those reasons, especially when you don’t make the effort of pointing them out in your story.

For example, you have a character who is very wise and calculating, so you name her Sophia because Sophia in Greek means wisdom. Your readers wouldn’t appreciate this fact because it’s highly unlikely that most of them know Greek.

Think about this and maybe just think of other ways to show your readers that your character Sophia is indeed smart. That will make your readers feel more compelled to finish your story!

If you’re aiming to market your book to a diversified audience, it would be constructive to avoid naming your characters in foreign words that most people do not know how to pronounce.

Maybe do so if your storyline justifies your naming reasons. For example, if you name your superhero Huītzilōpōchtli based on the Aztec deity of war and sun, it will most likely stumble your readers. Is Huit pronounced like Hwit or Hewitt? Is poch pronounced like pock or poach? Exactly.

This mostly applies to superheroes and characters with secret identities. Why? Because most superheroes go by a different name when they’re fighting crime to keep their personal lives private.

For example, if Mrs. Jordan is the character introduced to you at the beginning of your story, then the character should be referred to as Mrs. Jordan as much as possible unless you made a point to make your readers understand why he can be called something else.

But if along your storyline, someone refers to your character as Cindy or Dr. Jordan, it can be confusing to know that you’re talking about Mrs. Jordan. You may have mentioned that Mrs. Jordan got a medical degree, but if you only glossed over this fact, then it would probably be easily forgotten.

You may have an alien superhero character in your story, but that is no reason to name him or her Aedfasry or Psiltybresxd. Realistically speaking, it would be somewhat impossible for an extraterrestrial character to have a name like John, but going extremely overboard is not acceptable.

You can work your way around this dilemma by stringing familiar words to conjure up new names. For example, Sahara and Moor can be Sahamor.

Want to name all your superhero characters in a short amount of time, and thinking of them by yourself gives you a headache? Check out our free superhero name generator!

Authors or writers who have a hard time coming up with original superhero character names for their stories should no longer worry as this tool is made for them.

We have listed out hundreds of cool superhero names in our superhero name generator, so you can be assured that you’ll get a unique new name every time!

Our tool is completely free and easy to use. Just click whether you want a male or female superhero name and click the GENERATE button!

Every name is computer-generated, so you can use our superhero name generator as much as you want until you get a name that you like.

Also feel free to try our author tools, starting from our builder for mock up book cover or romance novel name generator.

In the world of notebooks, spiral notebooks never go out of style. Despite the existence of digital notebooks, END_OF_DOCUMENT_TOKEN_TO_BE_REPLACED

As an author or publisher, you’re accustomed to using the power of words to captivate your audience’s interest. END_OF_DOCUMENT_TOKEN_TO_BE_REPLACED

An electronic device that embraces portability and functionality, that’s what defines iPads in our world today. They’re a END_OF_DOCUMENT_TOKEN_TO_BE_REPLACED

If you’re looking for a cost-efficient solution for your print projects, you’d want to try publishing your content END_OF_DOCUMENT_TOKEN_TO_BE_REPLACED