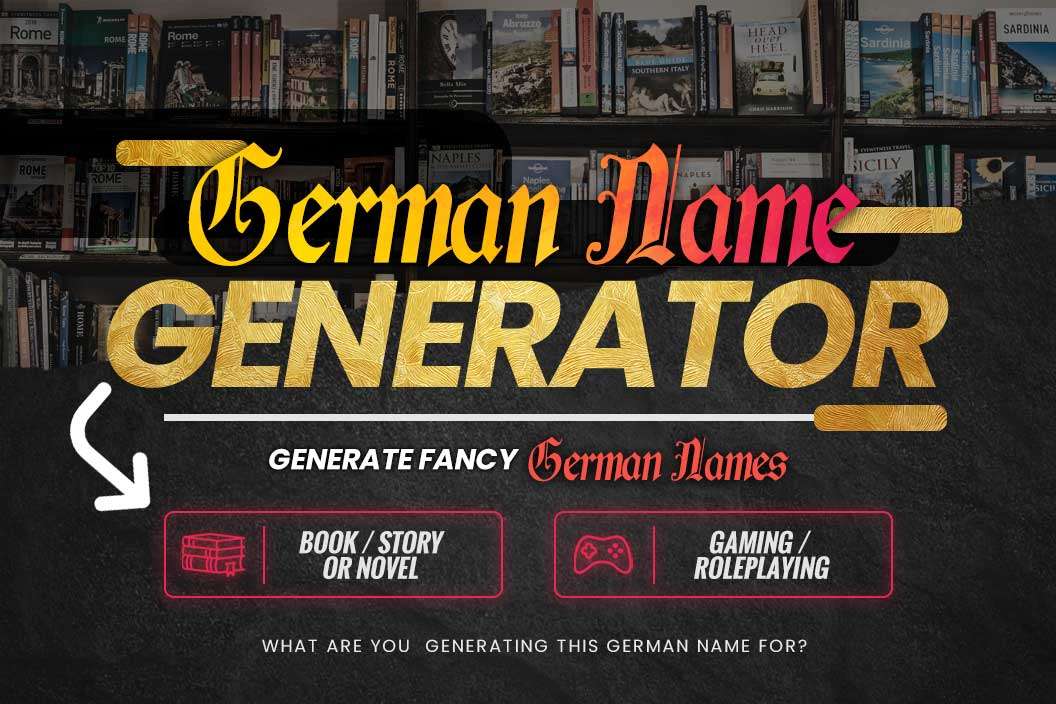 German names are common in Hollywood feature films. Like most western names, German names begin with a first name followed by a surname.

Aside from beer and sausages, Germany is renowned for producing scientists, engineers, and innovators.

It would be best to consider using German names for characters fitting such descriptions as a writer. You need not stress much as there are many Germanic names variations available.

The German name generator will save you the trouble of searching through tons of German names. This generator is a great tool as it provides creative and practical German name suggestions. You’re only a few steps from coming up with a compelling name that fits your German-ish character.

Tribes have existed in Germany for ages. However, it is rare to find information regarding the pedigree of the incumbent tribes where Germany currently sits. Some sources point out the origin of Germany back to the Nordic Bronze Age.

These tribes expanded from Northern Scandinavia and Northern Germany towards the southwest during the 1st BC. They encountered slaty cultures.

The Roman cavalry regiment carried a long campaign in Germania, present-day Germany. After some period of observation, the native tribes became familiar with the warfare tactics used by the Roman legions.

Julius Caesar vanquished much of the Germania region during the Gallic wars of 57 BCE. Germany’s history has patches of war as the nation struggled to stabilize and initiate statesmanship.

One such hideous war was the second world war that left Germany annihilated and in ruins. She became a state in 1871, but some individuals recognized the nation’s formation after the collapse of the Berlin wall.

Germans have various attributes and traits which set them apart from other cultures. However, some people are inclined to relate Germans with negative stereotypes based on Germany’s heinous history.

However, when you look beyond these prejudices, you’ll notice some unique characters synonymous in most Germans. Some of their outspoken traits are:

The Germans are some of the most hardworking individuals globally. They are known to approach issues rationally to get an elaborate solution. The industrious culture in Germans results from the unprecedented discipline they possess.

Germans are outright objective in their social interactions. Therefore, beating around the bush isn’t typical in most German conversations. They want to drive a point home most efficiently and honestly.

Albeit this trait appears normal in Deutschland, some global cultures may take this offensively. Cultures that prefer indirect communication may even view Germans as rude. Diplomatic and straight shooters are some words that may describe their character.

However, this mode of communication has its own merits. First, there aren’t many wraps formed around information, and deciphering is straightforward. Essentially, the culture allows for free speech directly.

3. Germans Are Structured And Organized

Germans conform to rules and organization structures in their society. The German republic has even set up a wing, Ordnungsamt (‘office of order’), that deals specifically with order. As such, there are numerous rules and regulations that Germans follow.

It is interesting to note that the Germans adhere to them strictly. Some schools of thought think that Germans’ adoption of an orderly manner comes from Prussians. The Prussian kingdom is famous for its well-organized and efficient battalion.

The reputation of forming structures orderly makes the Germans (die Deutsche) efficient and highly effective. The nation even has laws that govern beer!

Unlike in most places of the world, Germans are hesitant to cross the road at a red traffic light. Perhaps the speeding automobiles on their Autobahns have some influence on that.

Additionally, each household must own up to four different trash cans. This law enables the sorting of wastes from the household level. This way, plastic, and organic waste sorting takes minimal time, and processing happens separately.

Punctuality is one of the chief virtues of Germany. Arriving on time demonstrates respect to the other party and is not taken lightly in Deutschland. They prefer arriving too early rather than late.

Even though punctuality isn’t a thing to all Germans, they will apologize for turning up late. Likewise, their transport service provides a schedule that citizens trust to be true.

Different cities in Germany host Beer festivals annually. Oktoberfest, held annually in Munich, is the most prominent of all. It usually begins in mid-September and goes on until the first few days of October.

The nation has taken brewing seriously for centuries and has even enacted laws governing the preparation of this drink.

The country has over 1300 breweries and 5000 distinct brands of beer. The nation also ranks among the top countries that consume beer.

Did you know that Germans built a brewery, Tsingtao, immediately after establishing a colony in China? Presently, Tsingtao is the second producer of beer in China. Furthermore, most Germans can pop up a beer even without a bottle opener!

Meat forms the bulk of German dishes. However, Wurst (Sausage) is the predominant protein consumed by Germans. There are various versions of sausages prepared in Germany.

Currywurst, Weisswurst, Blockwurst, Sommerwurst, and Blutwurst are just some of their famous sausage meals. Potatoes (Kartoffeln) and staple foods are also widely consumed in Germany.

You need to try out the finger-licking bread rolls baked in Germany. They come in diverse tastes, qualities, and shapes. I bet German international students crave these yummy Broths (bread) that they may become homesick.

The bottom line is that baking is deeply rooted in Germany as bread is a huge part of their traditional menu.

Typical shelves in German bakeries have stacks of rolls and loaves of various shapes, tastes, and colors.

Be it crunchy, savory, or plain. You can have bread your way. Locals even flock to bakeries on Sunday morning to get fresh supplies of bread.

1. Selecting An Appealing And Indelible Names

A lot of names are catchy and make the character stand out. Does the name merely appear captivating? Does it provide an anecdote about your character to your intended audience?

Ensure you pick a catchy and unforgettable name that the audience will memorize quickly. Please don’t make it too familiar, though.

2. Is The Name Authentic?

You’ve already created the world for your story. You may need to include a real name that fits the character in your story. Jonas is ubiquitous in Germany, and your story may need a character bearing this name.

3. What Is Your Character’s Age?

Age is a crucial factor in character naming. It should resonate with the time in which your character was born. Gisela may be a nice name for a character born in 1922. What of one born in 2002?

Be mindful of the genre. Are you writing a romantic comedy? A sci-fi or a dystopian future’s story?

Ensure the name complements your genre. Consider the setting and the appropriate names to use. Kim, Emma, Hanna, or Anna can make a list of characters born in the 21st century. Let them be coherent with the timeline and the story’s themes.

However, I doubt if Ingrid or Ursula will list a story set somewhere in the distant future. You can accommodate names like Ceres, Timo, or Kai as there’s some room to wiggle.

5. Be Both Consistent And Dissimilar

Consistent usage of names enhances fluency in your write-up. Consider using a unique name but don’t change it in your novel. After breaking away from David to Dave, Mr. Leroy will confuse your readers.

Try associating the character’s name to their occupation if you have to. Mr. Leroy would be appropriate if your character holds some senior position.

Moreover, ensure that the character names are distinct. Using similar names (like John and Jona) makes it exhausting to read out the novel.

Your reader will have to remember the distinct qualities of the closely named characters. This similarity is tiresome and slows down the reading.

A character name should reinforce their attributes. A rough character that fancies their own company can take “Stone” as their name. Alternatively, Rose may serve well as an adorable and charming name for a character of such traits.

Writers can save time by using a German name generator. It can take off the heavy-lifting of manually looking for names by providing captivating character names.

Germans have a unique culture. One that some cultures may not easily accommodate. They speak plain facts without sugarcoating anything. Furthermore, they are punctual and huge fans of beer.

There are some variables to consider when selecting names for your characters. Authenticity, age, and appeal will make them stand out. Minding the genre of your story will also aid in helping you choose good names. Thanks to the German name generator, you don’t have to struggle in coming up with the perfect German names.

We hope that you’ll enjoy using this tool and that it will inspire you to create a masterpiece in your upcoming novel, play, or short story.

Also feel free to check out our 3d book mockup designer and our title generator for books.

In the world of notebooks, spiral notebooks never go out of style. Despite the existence of digital notebooks, END_OF_DOCUMENT_TOKEN_TO_BE_REPLACED

As an author or publisher, you’re accustomed to using the power of words to captivate your audience’s interest. END_OF_DOCUMENT_TOKEN_TO_BE_REPLACED

An electronic device that embraces portability and functionality, that’s what defines iPads in our world today. They’re a END_OF_DOCUMENT_TOKEN_TO_BE_REPLACED

If you’re looking for a cost-efficient solution for your print projects, you’d want to try publishing your content END_OF_DOCUMENT_TOKEN_TO_BE_REPLACED