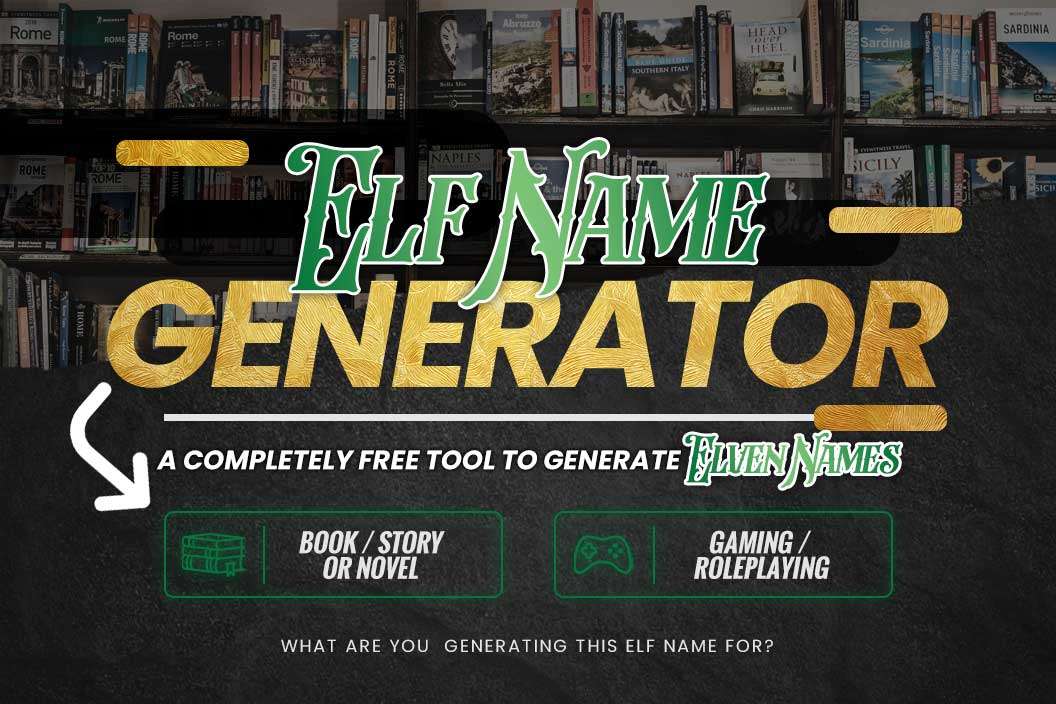 Do you sometimes think that you don’t belong in this mundane world? Do you feel more comfortable hanging out in a forest with nothing but nature surrounding you? Then you must be an Elf!

Elves come in many forms, but they are most known with their statuesque physical traits, long white hair, pointy ears, and graceful movements. If you think you belong in the Elven Kingdom, then you might want to know your true Elven name!

Our free Elf Name Generator is the first step to your transcendence. Simply enter your first and last name and gender to see your identity in Elven form. If you think the generated name doesn’t feel right, just click the *Generate* button a few times to find your true Elf name!

Our tool is filled with all the Elven names we could gather from around the world. Our extensive research in the Elven world has led us to create a magical algorithm that transforms your human name into someone who possesses inner magic.

Are you curious to know your Elven name? Try our tool and find out!

Elves are humanoid beings of Germanic mythology and English Folklore. They are generally represented as two distinct types:

When it comes to their abilities, elves are known to possess immortality and hold ethereal power over nature. They are fast, strong, and very intelligent. Moreover, elves are depicted as otherworldly beings with great beauty, feline grace, and pointed ears.

Elves are portrayed as elusive and small people with naughty and playful personalities. That is in the early modern period of English folk tales. According to folk tales, elves are often depicted as children with several different facial characteristics and a fair amount of hair covering their bodies.

Elves are not evil in nature. However, they are known to annoy humans or interfere in several of their affairs in the English folklore. When English folk started to immigrate to America, they brought some of the folklore and tradition with them. That particular portrayal of elves then adapted into the Christmas elves of pop culture in America.

After J.R.R. Tolkien’s epic saga, The Lord of the Rings took the world by storm, Elves became a staple character in modern fantasy.

The current children’s folklore of Santa Claus in the United States, Canada, the United Kingdom, and Ireland usually involves green-clad elves. They have pointed ears, long noses, and pointed hats as helpers of Santa or hired staff. They produce the toys located in a North Pole factory.

In this portrayal, elves are slightly similar to graceful and gentle versions of the elves mentioned in English folklore. As demonstrated by the success of the successful Christmas movie Elf, the role of elves as Santa’s helpers has continued to be successful.

Also check out our author tools starting from our free 3d eBook cover creator online or our book name generator for fantasy genres.

In the world of notebooks, spiral notebooks never go out of style. Despite the existence of digital notebooks, END_OF_DOCUMENT_TOKEN_TO_BE_REPLACED

As an author or publisher, you’re accustomed to using the power of words to captivate your audience’s interest. END_OF_DOCUMENT_TOKEN_TO_BE_REPLACED

An electronic device that embraces portability and functionality, that’s what defines iPads in our world today. They’re a END_OF_DOCUMENT_TOKEN_TO_BE_REPLACED

If you’re looking for a cost-efficient solution for your print projects, you’d want to try publishing your content END_OF_DOCUMENT_TOKEN_TO_BE_REPLACED