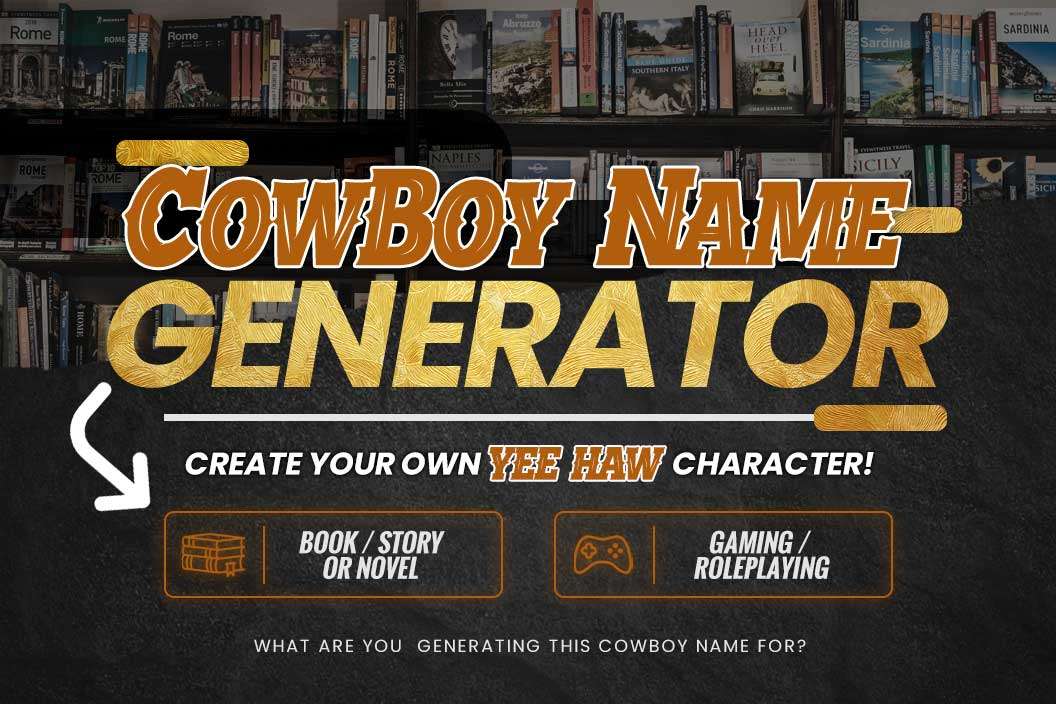 It is no secret that the western genre is making a comeback. Nowadays, cowboy culture extends beyond the West.

It just makes sense that we have a name generator to keep up with all these modern cowboys out there!

This is your chance to create a unique character based on the traditional Western Cowboy. The first step to creating your own Western-themed handle is selecting a cowboy name. That is where our Cowboy name generator comes in handy!

Using our Cowboy name generator, you’ll create a name and personality fit for the Wild West to add a little cowboy-Esque flair to your content.

History And Origins Of Cowboys

The history of cowboys is long, with roots that go back to the 16th century BC. The term itself was first used in the 19th century, but cowboys have been around for much longer than that.

The cowboy image is derived from the Spanish vaquero, derived from vaca, meaning cow. In Texas and northern Mexico, the first cowboys were found where Spanish explorers had introduced cattle in the 16th century.

Throughout the 17th and 18th centuries, Texans’ number of cattle owned increased significantly. In the 19th century, a cattle drive consisted of 3,000 to about 15,000 cattle.

In the context of the wild West, a cowboy was a man who worked on horseback, rounding up cattle and other livestock.

Cowboys also did work on farms, but they were mainly known for their riding horses and being great shots with guns.

In stereotypical American West, cowboys referred to anyone who worked outside and had a rugged personality, authoritarian, independent, and was known for their hard work.

They were also a very superstitious bunch. This made it natural for them to give nicknames to each other that embodied those qualities.

Cowboys’ use of nicknames was to show respect and honor (i.e., you don’t call your boss by his first name).

They wore their hats to protect against snakebite and sunburn. The wide-brimmed hats also served as a plate for beans and other food. Cowboys also made their candles from animal fat.

Cowboy names are popular among the folk of the United States, particularly those living in Southern states in the rural areas. They have a long history, and they have several interesting characteristics.

Cowboys have been in the American psyche for a long time and have become a symbol of the wild West.

The modern cowboy is represented in many different ways, and these representations are constantly changing.

What’s weird is that today’s modern cowboy depiction is just as different from their original portrayals.

The popularity of cowboy names has waned in recent decades as society has changed, but the classic cowboy name still has a charm that is just as powerful today. A subtype, called rodeo cowboys, participates in rodeos.

A cowboy in the modern-day still refers to a person who works in agriculture, especially ranching. However, that is not always the case;

Cattle ranching, cowboy culture, and the American frontier helped shape the nation. Today, that heritage is still celebrated in many ways – from rodeos to music to country-western clothing – by people who have a genuine appreciation for our nation’s history.

We often imagine a man wearing a cowboy hat, jeans, boots, and a western shirt when we think of cowboys.

The popular image is something like this. The fashion of a cowboy is usually associated with the old West.

Cowboys wore much different clothing, but most worked on their farms and ranches. The most popular attire was trousers, boots, and a shirt.

The main reason for their clothing was to protect them from weather conditions. For example, cowboys wore leather chaps to protect their legs from thorns, insects, and rattlesnakes.

The bandanna is one of the most prevalent forms of clothing used by cowboys. It is a very simple headdress that can protect against the sun, wind, dust, and even rain.

Most cowboys would carry two or three bandannas on them at all times in case of an emergency.

The conquistadors introduced the bandanna to the United States from Spain. It was first known as a “handkerchief” and was used for everyday purposes such as wiping sweat off of their brows and noses.

The chaps are the leggings of cowboys, which were first introduced in the mid-19th century. They were made from leather or sometimes from deerskin. The Chaps were attached to the pants and the saddle with a string.

Cowboys wore them to protect their legs from getting injured by brush and bushes or the horse itself.

Cowboy boots and spurs are essential items of clothing for all cowboys. Cowboy boots were usually made of leather, with a pointed toe and high heel, with the heels from wood or iron. Before the cowboy boot came into existence, cowboys wore boots with flat heels.

These boots have now become an integral part of American culture and identity. There is no doubt that they are associated with the Western American lifestyle. They are even used in Hollywood movies to portray American culture.

The cowboy hat has been an iconic symbol of cowboy life for nearly two centuries. They come in different styles and colors, but the most notable feature is their wide-brimmed shape.

The brim blocks the sun and rain while still providing good visibility. The wide rim provides air circulation under the hat, preventing sweat inside.

Today, one of the most iconic symbols of the American West is the cowboy hat. A cowboy hat serves as a badge of honor and shows pride in being a cowboy.

These gloves serve the purpose of keeping cowboys’ hands clean while working on a ranch or out on a ride. Cowboys first wore gloves to protect their hands from sharp objects like cactus and barbed wire.

Jeans have been an integral part of the modern cowboy’s attire for decades. The popularity of jeans has increased over the years, especially with the changing fashion trends and new styles.

Most belts should hide a person’s gut, but the cowboy belt is different; it is a modern take on the classic western belt. Its solid brass buckle and tip-top leather make it a heavy-duty belt to withstand the test of time.

The belt has become a fashion statement and has evolved into a symbol of masculinity, strength, and attitude.

Horses were and still are a vital part of the lives of cowboys. They were used as transportation to get from one area to another and work.

Cowboys needed horses that could be strong and fast yet had enough endurance to withstand long days in the saddle.

Pickup trucks are one of the most practical vehicles for modern cowboys to use around the rough ranch terrains. Pickup trucks haul and tow heavy loads off-road and through any weather condition.

Cowboys in the old West were looking for a way to prove who was the strongest and fastest, so they organized these competitions.

Rodeos weren’t always about competition, though; the earliest rodeos included a parade of horses, cattle drives, and other activities that were more about entertainment than competition.

Cowboys use rifles to protect cattle from wild animals such as wolves, bears, and cougars. While on horseback, they often prefer the pistol over the rifle.

The pocket knife is also another standard tool used by cowboys.

In this article, we’ve explored the history of cowboys, discussed some cultural practices of cowboys, and given you some examples of cowboy names and their meanings.

A Cowboy name generator is an essential tool. It is intuitive, fast, and straightforward. This name generator will help you find the best cowboy names in just a few minutes.

You should check our Cowboy Name Generator if you’re looking for a fun way to generate some character names for your western-themed writing. Be sure to give it a try today and be on your way to writing that masterpiece! We hope you enjoyed reading!

In the world of notebooks, spiral notebooks never go out of style. Despite the existence of digital notebooks, END_OF_DOCUMENT_TOKEN_TO_BE_REPLACED

As an author or publisher, you’re accustomed to using the power of words to captivate your audience’s interest. END_OF_DOCUMENT_TOKEN_TO_BE_REPLACED

An electronic device that embraces portability and functionality, that’s what defines iPads in our world today. They’re a END_OF_DOCUMENT_TOKEN_TO_BE_REPLACED

If you’re looking for a cost-efficient solution for your print projects, you’d want to try publishing your content END_OF_DOCUMENT_TOKEN_TO_BE_REPLACED