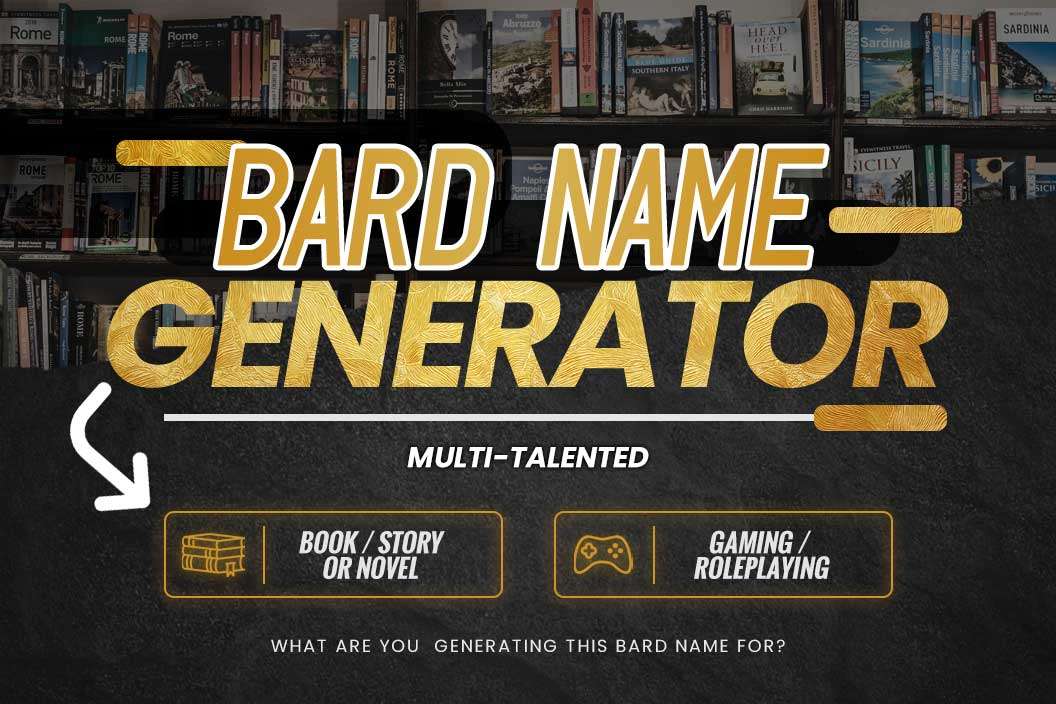 You can refer to bards as jerks of all trades. Bards are known for practicing magic, poetry, songs, and drama.

They deeply understand how humans perceive reality and therefore know how to create illusions and charm magic.

Some bards become heroes while others develop admirable skills in various fields. Most world rulers respect bards for their artistic ability, immense lore knowledge, and many more.

Stories with bards are usually quite exciting, and therefore as a writer, you need to look for an interesting name. The bard name generator will help you find interesting names for your bard character.

Also, the names created by the bard name generator are carefully chosen to reflect the personality, history, and identity of the character.

Bards were ancient Celtics, and as mentioned, they were great poets. Their primary function was to compose and sing.

The songs were always about celebrating the achievements of warriors etc. Bards mastered different traditions, religions, laws, and many more.

In medieval Welsh and Gaelic, a bard was simply a professional poet. They were composers for lords. However, if the employer doesn’t pay as agreed, the bard would compose a satire.

There were scops, minstrels, skalds, etc., in other Indo-European societies; their roles were similar to those of bards.

Bards were among the two distinct poet groups in medieval Ireland. The other poet group was known as fili.

On poet’s status, bards were simply the lesser poet’s class and couldn’t take on roles of higher poets.

According to historians, the distinction between bard and fili was Christianity. The fili was more connected to the church. However, in the early modern period’s terms, bard and fili were used interchangeably.

In medieval Irelands, the bards organized themselves into professionals with excellent training and education. They did learn the clan’s and country’s traditions and history.

Plus, they learned the technical music requirements, such as verse techniques. Bards were also officials in the king’s court or the chieftain; therefore, they had other numerous roles.

Overall, they were satirists and chroniclers; their primary role was praising their employers and would damn anyone that crosses them. In Ireland, the bardic system did last until the mid-17th century.

Taliesin and Aneirin are legendary Welsh bards active in the 6th and 7th centuries. There is little to no information about Dark Age welsh.

However, the middle welsh material was the core source of Arthurian legend and matter of Britain; they were from the 13th century.

According to Welsh laws, the bard was a king’s household member. The duties of the bards were composing and singing for the sovereignty.

The bards were known as Baths. In India, they were mythographers and those working for village nobles.

All history lovers know that there are no records for early medieval literature. It was passed from one generation to another by word of mouth.

Then, bards were famous in medieval Irish, Scottish, Welsh, and English. The origin of several stories, such as Arthurian Legend and King Arthur, was in many Celtic myths and Welsh legends.

Bards mostly told them from medieval times. In early medieval, bards had a distinct class, and their roles and functions were hereditary.

However, they were in three groups, each with specific roles. The first group gave families histories and poetic genealogies, the second group chanted the nation’s laws, and the third and final group sang praise hymns and celebrated victories.

Celtic bards did decide to create an organized bard society. Society has hereditary privileges and rights.

People and the government had the utmost respect for bards, and they didn’t take part in military service or pay taxes.

They had special duties: celebrating their people’s victory and praising God through hymns. All these made the medieval bards very powerful or influential.

There were many bards in the medieval era. However, there were only a few with top-notch mastery of the game. Here is a list of the most famous medieval Celtic bards.

The best bard name shouldn’t be too complicated. Depending on the character’s race or upbringing, you can select the first bard name.

You can create a second name or surname as you like. For example, you can use words alluding to instruments, words, stories, or music. The bard name generator can provide you tons of bard names, still, here are examples of bard names for you;

Troubadours and Minstrels replaced the medieval bards during the middle ages. The minstrel was simply a servant that would travel while entertaining people.

They would also offer court or castle music. Minstrels were creative individuals and would create their ballads mostly about courtly love and chivalry.

In addition, they were famous for their ability to memorize long poems based on legend and myths. The poems were epic and were known as “chansons de geste.”

Troubadours also created ballads about courtly love and chivalry. They also told stories about historical lands and far lands. They were travelers to far countries in events of crusades.

The bards are simply professionals who record prominent people’s achievements and great heroes. Later on, they do spread the tales to the people.

Bards were quite famous in the medieval period. Amazingly they could move from one village to the other narrating stories in exchange for shelter, food, and even money.

Other than storytelling, they could also compose poems, songs, etc., which made their tales livelier and more memorable. In today’s world, there is bard; however, they are composers, lyricists, songwriters, etc.

To be a bard, one needed to have a great mastery of writing poems, i.e., talent. Note that composing interesting rhymes while storytelling wasn’t straightforward.

Adding some excitement to the poetry, such as puns and other designs that catch the listeners of readers needed top-notch skills.

People do not love stories that hook them up. Therefore all great bards did have the skills to create amazing poems, plus song composition also depended on the bard’s poetry skills.

Music is a form of art that has been around since the beginning of time. Truly songs have the power to relay emotions in ways that word can.

To bards, music is essential when it comes to storytelling. Bards could compose songs and use them as background music when narrating stories.

Other bards did use the music to allow people to get the emotions and let them sink in. However, a good bard should compose and sing several songs at different story parts.

The song is usually sweeter when a bard has mastery of musical instruments.

It can make them face rejection in the different villages they visit. The bards had to learn and master other people’s history and culture to ensure peace and love.

After acquiring the knowledge, they could twerk the stories to suit their audience perfectly.

It was all about traveling across the world for the bards. They could tell stories to the different people they met and thus needed to learn foreign languages in their journey.

Without proper language mastery, they could not fulfill their purposes. Plus, knowing more language meant they could communicate with many people or communities, making them famous.

The same also applies to the modern world; if stories and poems are in different languages, they reach more people.

Funnily, the critical details of William’s life remain a mystery, such as birth date. However, the world still celebrates him, and people celebrate his birthday yearly, his death date.

However, he did collaborations with other play writers on his several plays. Some of the collaborations were with Thomas Kyd and Antony Munday. The most famous plays by Shakespeare were Romeo and Juliet and Macbeth.

Absolutely yes; however, they have different titles. They are known as composers, songwriters, and other musicians’ coupling terms.

Bards were professional singers or poets. Their primary functions were composing and singing verses in honor of brave men, heroes, etc.

The word bard is Celtic, and it became so popular during the renaissance that’s in the 16th century. It was the name of several poets such as William Shakespeare etc.

Bards were real people and thus had notable and real names. The bard name generator will help you get the perfect names for your characters. We hope that you’ll consider using this tool in your upcoming novel or short stories.

Also take a giant step to success by checking out our other popular tools: our Book Cover Mockup Maker and our Book Title Generator.

What makes a book cover cool? Although there’s no definitive answer to this question, a few factors might END_OF_DOCUMENT_TOKEN_TO_BE_REPLACED

Creating book covers is an essential part of the publishing process, and a lot of thought goes into END_OF_DOCUMENT_TOKEN_TO_BE_REPLACED

Think about it – when browsing through a bookstore or online, what makes you pick up a book? END_OF_DOCUMENT_TOKEN_TO_BE_REPLACED