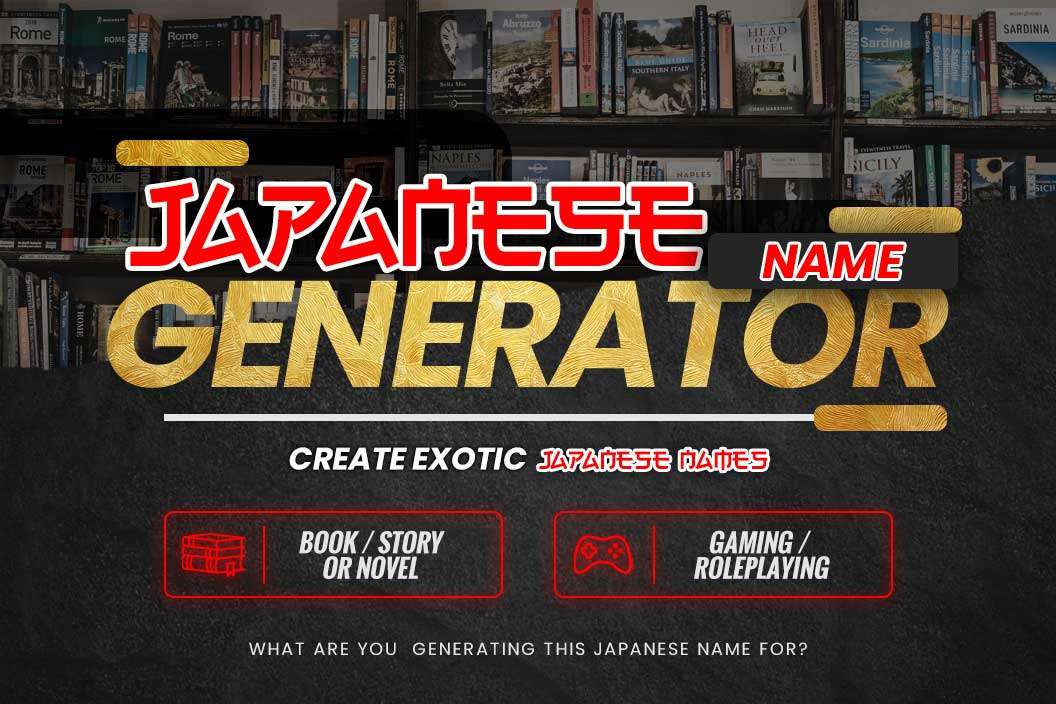 Japanese culture has been rising in popularity over the years, as evidenced by the rise of video games. When it comes to naming Japanese characters, you might be scratching your head in confusion. But no worries! With the Japanese Name Generator, you’ll get access to hundreds of name suggestions.

This article will teach you everything you need to know about the Japanese naming system and rules that will be helpful when choosing a name. If you’re looking to add a bit of flair to your characters, then you’re going to want to try our Japanese name generator.

With this handy tool, you can create random beautiful, and exotic names for your manga or novel characters.

Speaking To And Of Others In Japanese Culture

Knowing when and how to speak about others in Japanese is essential. The Japanese way of speaking to and of others (termed “teineigo” or “Keigo”) can be tricky to master. Keigo is the honorifics in the Japanese language.

The Japanese language has many words that describe how one speaks to or of others. These terms are usually added at the end of a sentence and convey respect, emotion, or familiarity.

You can add different suffixes to the end of a sentence, but they are not interchangeable and must follow a specific pattern.

Japanese naming customs are unlike any other in the world. While most countries follow a European tradition of giving three names; first, middle and surname; Japan has been unique.

Japanese naming customs are based on various factors, including region, family history, and social status. There are over 100 different ways to create a name in Japan.

While the Western custom of naming a child after a grandparent or other relative is generally not done in Japan, there are certain situations in which they may name a Japanese person after someone.

A typical example is when the parents of a child who died young name their next child after their deceased sibling or other loved one.

Young girls may also be given a name that commemorates an older relative who has passed away.

According to Japanese law, married partners must have the same surname. When a woman marries, she almost always takes her husband’s surname. Some Japanese women may prefer to use their maiden name in informal contexts.

In Japan, the given name is used for almost all social interaction. It is written in kanji, which can be challenging to pronounce.

Many Japanese people have names of two kanji characters, so the pronunciation is more complicated than a name with the same meaning in English.

Japanese names are pretty different than most western names.

Many foreigners are usually confused by the whole page of kanji characters. They wonder why there are so many characters and what they all mean. The family name is written in kanji, while the given name is in katakana.

There’s no prescribed way to write them; the order is usually family name first, then given name.

What you need to remember is that;

Aiko is a feminine Japanese name that means a little loved one or a beloved child.

Akane is an ordinary girl’s name. In Japan, Akane means ‘deep red.’  Other countries may use this name, although the meaning may change.

The name Ikumi means “fragrance or perfume” to signify beauty.

The origin of this word varies across different cultures. In Japanese, it means slippery or shiny. In Slavonic, it means a strong woman, and in Irish, it’s derived from Ciara, which means dark-haired. In Russian, it means ruler of the people or mistress ruler.

Other forms of the word include; Kiera, Keira, Keera, Kyrie, or Kirra.

Hatsune comes from the Japanese word “Hatsu,” meaning “beginning or first.” Depending on the kanji, there are several other ways to read this name. Other such meanings are; radiate or emit.

The meaning of the name is “wisteria girl” or “girl of the violet hour.” The popularization of the name Fujiko was by the fictional character Fujiko Mine from the manga series Lupin III.

Her last name is misspelled as “Mine” in the English translation of the manga, but it is spelled “Mīne” in katakana characters and means “violet” in Japanese.

The word “mine” was used instead in many other languages, inspiring fans to use her full name when writing their characters.

Atsuki is a popular Japanese name and translates to “hot or warm.” The name also has several other meanings, including; sincere, radiance, rare, bright, shine, and bright.

Bunji has several meanings: next, preside over, be affectionate, child, or two.

The Japanese name Chikao combines several meanings, but all relate to wise and cleverness.

Kohaku is a Japanese given name for boys. The meaning of the name is “yellow” and “amber.”

Kiyoshi is a Japanese boy name. In Japanese, the meaning of the name Kiyoshi is bright, shining, and transparent.

Akira is a unisex Japanese name that means “bright, clear, or intelligent

The name Kobe has multiple origins. In Swahili, it means tortoise; in Dutch and Hebrew, it is a pet name for Jacob, which means God protects. Other forms of the name are; Coby, Koby, Kobi, Colby, and Cobe.

One of the most famous Japanese names, Makoto, means truth or sincere. It represents honesty and integrity, two characteristics everyone wants to see in a friend or colleague.

The kanji used to write the name Makoto translates to “true koto,” which means “real stringed instrument” and simplifies the original name.

Kyou means “to meet,” or the one who is ready to meet the world with an open heart and mind.

He embraces all of the joys and sorrows that may come his way because he knows that he can’t solve anything in life without a good sense of humor, love, and acceptance.

The name Kyou can be written using different kanji characters, which translates to; capital city, apricot, or village.

The Japanese name generator is a fun way to create an authentic-sounding Japanese name that you can use for your latest novel or video game character. It’s also a great way to learn about the culture and language of Japan.

With so many names to choose from, you will easily find a name that fits your preferences. Whether you are looking for a unique or popular name, Japanese name generator has it all.

If you have trouble coming up with an original idea for your next project, try using this Japanese name generator today. We hope this tool was helpful!

Enjoyed using this Japanese name generator? If you’re looking for more random name generators for your fiction, check out our collection of Fiction Name Generators here.

What makes a book cover cool? Although there’s no definitive answer to this question, a few factors might END_OF_DOCUMENT_TOKEN_TO_BE_REPLACED

Creating book covers is an essential part of the publishing process, and a lot of thought goes into END_OF_DOCUMENT_TOKEN_TO_BE_REPLACED

Think about it – when browsing through a bookstore or online, what makes you pick up a book? END_OF_DOCUMENT_TOKEN_TO_BE_REPLACED