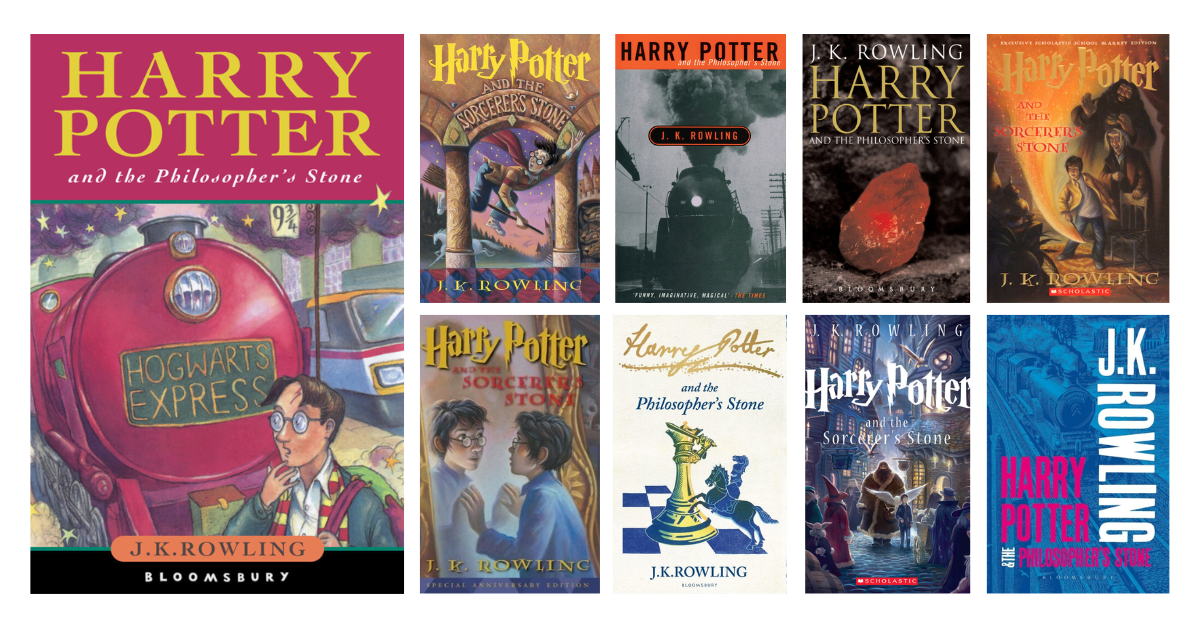 Book covers significantly impact a book’s success as they can help it stand out from the competition and attract attention from potential readers. A great example to prove this point would be the Harry Potter Book Covers!

Since the first Harry Potter book release in 1997, the covers have been integral to the series’ identity. Each book has a different cover artist, uniquely designing it to reflect the story. These covers have always been highly stylized, with bold colors and sharp lines to help the reader quickly identify the book. They also feature a single image representing the book; the title and author’s name are placed prominently on the cover.

The first three covers, for example, were designed to look like old-fashioned children’s book illustrations. The fourth cover, for Goblet of Fire, was darker and more intense to reflect the more mature themes of the book.

From the classic designs of the original British editions to the more recent illustrations of the American editions, we have created a collection of the most recognizable book covers that carry the power of the Harry Potter story through the years.

Thomas Taylor (for Philosopher’s Stone), Cliff Wright (Chamber of Secrets and Prisoner of Azkaban), Giles Greenfield (for Goblet of Fire), and Jason Cockcroft (for Order of the Phoenix, Half-Blood Prince, and Deathly Hallows) created the illustrations for the original UK children’s edition of all books in the Harry Potter series. While there are several illustrators for the book covers in this edition, the overall design is consistent from one book to another. The common ground for each cover involves the word “Harry Potter” written across the top, a vivid illustration of a scene in the book, and a brief section below that shows J.K. Rowling’s name.

Mary GrandPré created the illustrations for the original American edition of all books, including chapter illustrations, in the Harry Potter series while Scholastic released it. The cover has been praised for the way that it perfectly conveys the magical atmosphere of the series, carefully designed to appeal to children and to give them a sense of the magical world that they would be entering when they read the books. Each book cover in this edition features a portrait of Harry Potter wearing his trademark glasses and Hogwarts robes in a significant scene in the book. The book’s title is across the top of the cover, and the author’s name, J.K. Rowling, is below.

Bloomsbury published the original adult editions of the Harry Potter books in the United Kingdom from 1997 to 2004. However, this edition only contains the first four titles of the series. Compared to the children’s edition, the book covers in this collection have darker tones, specifically in monochrome. They also show distinctive entities from the series, such as the Hogwarts Express, Flying Ford Anglia, a hippogriff, and a dragon.

Bloomsbury Publishing released another version of the adult editions of the Harry Potter series in 2004, finally containing all seven books in the series. The cover art feature significant entities in each book, like the Philosopher’s stone, the door to the Chamber of Secrets, the Azkaban fortress, the Goblet of Fire, a Phoenix, a copy of the Advanced Potion-Making book, and Salazar Slytherin’s locket. The simple, sleek yet realistic illustrations used on each cover would market to older audiences who want their copies in hardcover or paperback.

Scholastic published the Exclusive Scholastic School Market Edition in September 2008, which was only available to schools via the elementary school’s book club catalog. The illustration on this cover shows a vivid shade of orange and brown as it depicts the magical scene when Harry, accompanied by Hagrid, tries out wands available in Ollivander’s Shop.

Like the School Market edition, Mary GrandPré created the cover art for The Tenth Anniversary Edition of Harry Potter and the Sorcerer’s Stone in 2008. The book cover shows Harry looking into the Mirror of Erised, illustrated to visually depict Harry’s vulnerable side through the choice of art style and color.

Much like its title, the main feature in the cover artwork for this edition, released in 2010, is the Harry Potter text stylized like a signature. Clare Melinsky illustrated the covers published in paperback, hardback, and Audio CD. Among the significant features of these book covers are the colorful yet minimalist illustrations of various elements from each book. (In order: Two chess pieces in combat, Fawkes, the Basilisk and the Sorting Hat, Dementors with Harry’s stag Patronus, the Dark Mark, a Prophecy record, Harry and Dumbledore on top of an island, and Ignotus Peverell’s grave in the Godric’s Hollow cemetery)

Kazu Kibuishi illustrated the cover artwork for the 15th Anniversary Editions of the Harry Potter series in 2013. The cover art is more vibrant than most editions released before this version, giving its readers a deeper glimpse into the magical world of Harry Potter. What makes this edition even better is the artwork of the Hogwarts Castle vividly displayed once the spines in the whole set are aligned!

Woodcut artist Andrew Davidson created the new covers for the redesigned Adult Edition, released by Bloomsbury Publishing in 2013. Noticeable features in this paperback version are the varying colors used to coat the artwork in each book, the title in another color, and the author’s name vertically displayed in white.

Award-winning illustrator Jonny Duddle illustrated the new cover art for the Harry Potter Children’s Editions, released in 2014. Harry Potter is more prominent in this edition compared to the past versions since he’s on every cover. The vivid illustrations appeal best to young audiences, especially with the vibrant colors that effortlessly depict the magical world in the series.

Jim Kay meticulously created the interior illustrations and cover art for the US and UK Hardcover Illustrated Edition of the Harry Potter series (Neil Packer also collaborated to help complete the title for the Order of the Phoenix book cover). The cover artwork for this edition overflow with color and detail, with slight variation in the text placement and design for the UK and US Hardcover.

Pottermore, the official Harry Potter website, revealed the cover art for the ebook edition of the series in 2015. Olly Moss created the set of art used in this digital edition, which appeared as minimalist illustrations in varied colors per book, directly depicting a significant entity from the book it covers.

Caldecott Medal-winning artist Brian Selznick created the cover artwork for the 20th Anniversary Editions Scholastic released in 2018. The illustrations are in Selznick’s unique black-and-white drawing style, paired with intricate details splashed throughout each cover art. The seven covers—while displaying significant events from each book—form one glorious image when placed side by side. The overall image shows Harry’s overarching story starting from his arrival at Privet Drive through the concluding event, the Battle of Hogwarts.

Designers and illustrators from the award-winning design studio, MinaLima, illustrated the cover artworks for a special edition of the Harry Potter books. As of writing, the studio has released only the first two books from the series. The full-color designs, visual graphic style, and elegant and almost royal-like frame made the cover artwork for this version stand out.

Studio La Plage illustrated the cover artwork for the 2022 eBook and audiobook version of the Harry Potter series, which are made available by Pottermore Publishing. The bold and striking colors in this edition accurately depict the wizarding world of Harry Potter, making these full-colored illustrations appealing to younger audiences.

No matter what your favorite book cover is, there is no denying that the Harry Potter series has some of the most iconic and beloved book covers of all time. The covers feature different illustrations and designs, offering a unique perspective on the books for each installment. No wonder Potterheads from all over the world enjoy these covers and appreciate the various interpretations of the series!

Have a quick look into the world of Harry Potter!

The Harry Potter series is one of the most popular series of all time. The books follow the adventures of Harry Potter, a young wizard, as he navigates his way through life at the Hogwarts School of Witchcraft and Wizardry, makes friends and enemies, and struggles against the evil forces seeking to defeat him and conquer the wizarding world. Translated into over 80 languages with over 500 million copies sold worldwide, it’s no surprise how the series has become one of the bestselling book series of all time.

Harry Potter and the Philosopher’s Stone was the first in the series, coming into life in 1997, followed by six sequels, all of which were commercial and critical successes.

The covers of the Harry Potter series are some of the most iconic and well-recognized book covers in the world. While each version varies from one another, each artwork retained the elegant and classic feel that effectively and perfectly reflects the magical world of Harry Potter. Harry Potter book covers are usually very colorful and busy, with many elements to catch the eye. However, the illustrations did an excellent job of representing the fantasy genre of the books, with their magical themes and images of flying broomsticks, castle towers, and Harry Potter himself.

Are you looking for more inspiration for your current or next Book Cover design? Find our Book Cover Ideas Blog here.

Dr. Seuss’s books are known for their quirky characters, rhymes, and illustrations. However, the book covers are still END_OF_DOCUMENT_TOKEN_TO_BE_REPLACED

In a world bombarded with images and messages from all sides, it’s no wonder that book covers have END_OF_DOCUMENT_TOKEN_TO_BE_REPLACED

Funny novels are sometimes hard to write because humor differs from person to person. For a humorous book END_OF_DOCUMENT_TOKEN_TO_BE_REPLACED