Adventure Books have always been seen as to have appealing and direct book covers. They’re there to directly attract the reader, get them involved from the point of looking at the book on the shelf. True adventure books are inspiring themselves; they draw the reader into events that can happen to them, right there and right now. The covers in a form have to draw some kind of response from the reader, whether it be positive, negative, or a simple gaze at it. One gaze is better than no gaze, it’s still a potential sale. 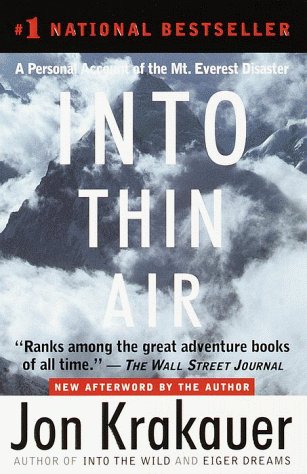 Into Thin Air, the title itself directs the reader to think of some form of cloud, a gloomy scenery that will form a mystified sense. The cover itself is again the main draw for potential buyers of the book. It sets the scene, and with the clouds it tries to amplify the fact that the air is personified.

The creative side of this book cover is fantastic. The title itself, ‘Adrift’, instantly makes the reader query the situation that the main character in the story is in. Has he purposely gone adrift? What’s happened to him? Is he alright? The cover of the book shows that the main character is creative, trying to find a way to somewhere (using his own sail), but where?

The concept of the art on the book brings a nice feel to us as a reader. It lets you know where, when and who by the flag and the sea. The flag, showing the United Kingdom, gives the location and a guess of the period of time. It must be 1800+, since the UK was founded in 1801. The where is seen by the sea and it’s perfectly emphasising everything in it.

Everyone has heard of Black Hawk Down. Whether it be the story itself as a factual tale, or the movie representation of it. The Black Hawk is the helicopter that arrived on the scene, and the cover sets it perfectly. The black shows the shadow and darkness in the event, and the chopper itself seems to be showing a gamma style vision.

The huge mountains are instantly the pull effect of this cover. The scenery has always been one represented by beauty… and horror. It allows us to see where the scene is already, and also who was involved with the picture of the survivors themselves. But what was the ‘story’ of the Andes Survivors?

In the world of notebooks, spiral notebooks never go out of style. Despite the existence of digital notebooks, END_OF_DOCUMENT_TOKEN_TO_BE_REPLACED

As an author or publisher, you’re accustomed to using the power of words to captivate your audience’s interest. END_OF_DOCUMENT_TOKEN_TO_BE_REPLACED

An electronic device that embraces portability and functionality, that’s what defines iPads in our world today. They’re a END_OF_DOCUMENT_TOKEN_TO_BE_REPLACED

If you’re looking for a cost-efficient solution for your print projects, you’d want to try publishing your content END_OF_DOCUMENT_TOKEN_TO_BE_REPLACED