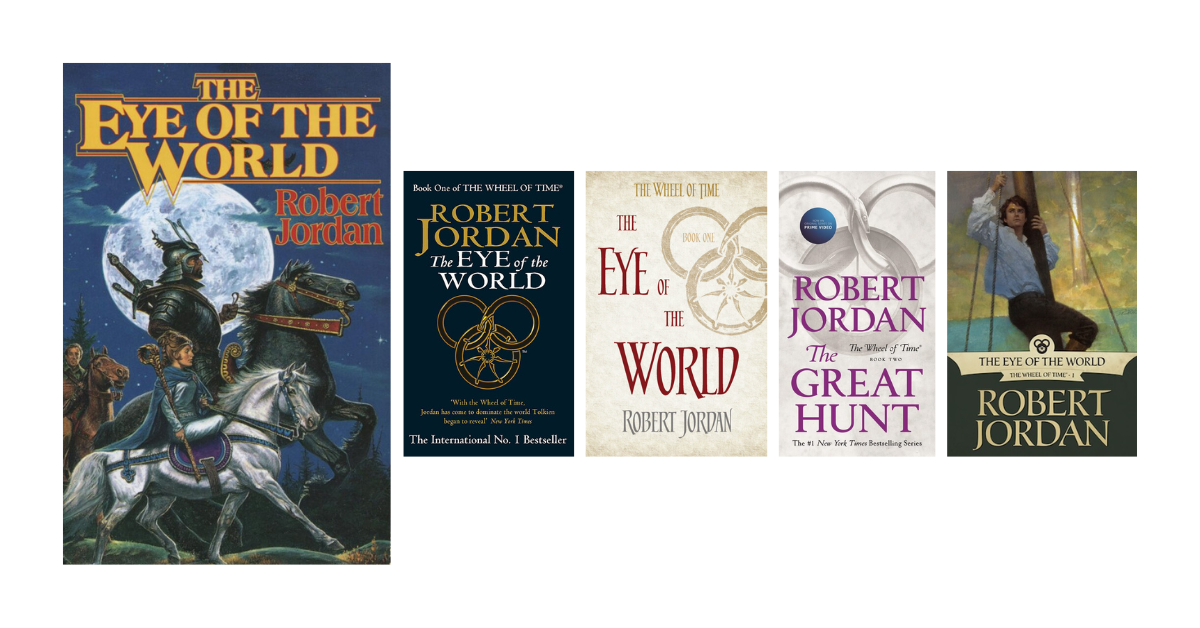 Think about it – when browsing through a bookstore or online, what makes you pick up a book? Often, it’s the cover that first catches your eye. If the book cover is intriguing enough, the reader will most likely read the synopsis and decide if it is for them. For example, the book cover might be whimsical and colorful if it’s a light-hearted fantasy. On the other hand, the cover illustration will likely be darker and more foreboding if it’s a dark and gritty fantasy. Either way, cover illustrations significantly contribute to a book’s popularity, much like The Wheel of Time book covers did to the series.

The Wheel of Time book series has sold over 90 million copies. It is one of the most popular fantasy series ever. Much of the series’ success is due to the beautiful and evocative book covers.

Since its inception in 1990, The Wheel of Time series has had some of the most iconic book covers in the fantasy genre. The book covers have been integral in communicating the scope and epic nature of the stories within to potential readers.

Each cover illustration perfectly captured the grandeur and magnitude of Robert Jordan’s writing, helping to cement The Wheel of Time’s place as one of the most beloved fantasy series of all time. It is clear that the covers of The Wheel of Time have played a vital role in the series’ enduring popularity and will continue to be an essential part of its legacy for years to come.

Here’s the collection we’ve curated for you to enjoy the various cover illustration of The Wheel of Time book series over the years.

Darrell K. Sweet, a known illustrator of science and fantasy novels, did the covers for the initial US hardback editions of The Wheel of Time series, except for the last book, which Michael Whelan illustrated. Many fans thought the classic covers for this edition were outdated in style. However, this straightforward cover art reflected the classic art style during its time, sometime in the 1990s, and was the most sought-after by collectors. The book cover illustration for this edition was also vivid and action-filled, with the title displayed large enough on top for emphasis.

The first edition of the UK version of the Wheel of Time book covers released by Orbit Books (UK) used a simple design far from the US hardcover edition. While the US version used an action-packed illustration, the UK version only displayed several texts about the book and the Wheel of Time logo featuring a snake forming an infinity symbol tangled with a wheel. The colors used were enough to emphasize the text, keeping the simple yet classy feel of the book.

Orbit Books released new UK covers for the Wheel of Time series in 2014. This edition features the Wheel of Time’s iconic snake wheel on a single-colored background whose texture looks like handmade paper. The simplicity of this book cover, from the font style to the colors used, evokes just the right mix of fantasy and mystery.

Contrary to the cover art of the original US version of the Wheel of Time series, the mass market paperback edition released in 2019 and 2020 were simple, almost lacking elements depicting the books’ epic fantasy themes. It features the classic Wheel of Time logo, each book showing the symbol from a different position and color. The font style and size still depict the series as a classic fantasy book but are still too simple to exhibit the beauty of its story.

5. The Wheel of Time E-book Covers

The ebook version of the Wheel of Time series was a fan favorite, and that’s for a reason! Although Tor Books commissioned different illustrators for each book, all cover art effectively expressed each book it represents, with each illustrator using their art style and interpretation of the world Robert Jordan created. The action-filled illustrations were vibrant, majestic, and compelling on their own, embracing the epic adventures contained in the book. Meanwhile, the text on the lower half of the book covers was simple, maintaining the series’ classy feel.

Book Covers and the Wheel of Time Series

Fantasy readers are discerning and often have a specific taste in the art that adorns their favorite novels. A well-chosen artwork can communicate much about the book and decide whether a reader will give your book a chance. A great book cover will convey the story’s tone, preview the world the reader is about to enter, and provide a glimpse of the adventure that awaits them. It should be eye-catching and memorable, making the reader want to learn more about the book. The Wheel of Time is a perfect example of a series with fantastic artwork on its covers.

The Wheel of Time book covers quickly captivated legions of new and existing readers worldwide. Hence, there’s no wonder how it earned the title of one of the greatest epics of the fantasy genre, easily topping the chart of international bestselling series.

An Insight into the Wheel of Time Book Series

The Wheel of Time is a well-written series of epic fantasy novels written by Robert Jordan and initially published in 1990. Brandon Sanderson co-authored the final three novels. Originally intended to span twelve books, the series centers on the journey of a young man named Rand al’Thor, who must battle the Evil One, an evil being prophesied to destroy the world.

The series was well-received and praised for its intricate world-building, compelling characters, and unrivaled action scenes. It quickly became a bestseller after its debut, with over 90 million copies sold worldwide as of 2021.

The Wheel of Time is widely considered one of the most incredible fantasy series of all time, leaving a tremendous impact on the genre. It is sure to continue to be a beloved classic for many years to come.

The Wheel of Time series remains one of the most popular and well-loved fantasy series of all time, and its book cover is among the most iconic in the fantasy genre. The franchise has sold over 90 million copies, translated into various languages around the globe. Fans loved the series for its complex characters and epic story. However, the book cover illustrations are just as iconic as the series itself, as each version is incredibly well-done, successfully capturing the feeling and tone of the books through their beauty and detail. There’s no doubt that the series is truly a work of art, and the book cover illustrations are a perfect reflection of that.

Are you in for more inspiration for your current or upcoming Book Cover design? Find our Book Cover Ideas Blog here.

Dr. Seuss’s books are known for their quirky characters, rhymes, and illustrations. However, the book covers are still END_OF_DOCUMENT_TOKEN_TO_BE_REPLACED

In a world bombarded with images and messages from all sides, it’s no wonder that book covers have END_OF_DOCUMENT_TOKEN_TO_BE_REPLACED

Funny novels are sometimes hard to write because humor differs from person to person. For a humorous book END_OF_DOCUMENT_TOKEN_TO_BE_REPLACED