Science Fiction is a creative genre so the cover of a science fiction novel has to be equally imaginative to be able pull in the reader. Below are 5 well done science fiction cover designs 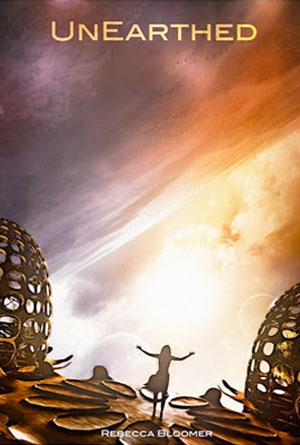 At first glance, it looks like most of this cover is occupied by empty space. But when the mind catches up with what the eyes see, readers will see strange land with a single occupant, looking up into what appears to be an alien sky. Then on even closer inspection, readers will see that it is the person that is on some metal landscape, and what looks like a planet, maybe even Earth, looms overhead. When the title is finally read and realized, there is a jarring sensation about what this novel may actually be about. Instead of being spelled unearthed, as in taken out of the ground, the title has been spelled UnEarthed, as in taken off the planet entirely. Who that person with their hands to the sky, to the planet that looms above them? What is that strange metallic surface that they are standing on? With these questions looming and the strange image that appears on the front, this is an outstanding cover that will entice people to read. 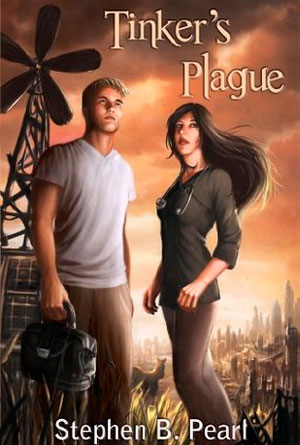 The title on this cover threatens to blend into the background, until the actual words are read. Anything with the word “plague” in the title is sure to gather some attention, and then the image begins to take over. Two young people, obviously in the medical profession as the woman has a stethoscope around her neck and the man is carrying what can only be described as an old-time doctor’s bag, stand in field, far from what appears to be a desolate city in the background. The air seems still, with ominous clouds overhead and a windmill that looks frozen. They look off into the distance, and their stance seems hesitant to go any further; the girl’s hair swings behind her as she turns to look with uncertainty. Every part of this still image is incredibly captivating and sparks an intense curiosity about the novel. 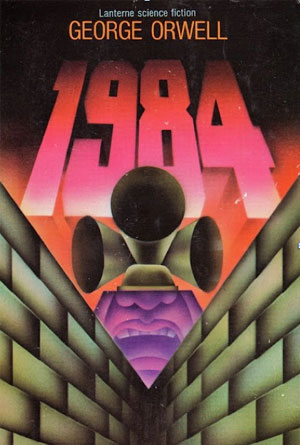 We live now in an age with computers that are capable of intense digital art, which can be used on the book covers that we find in stores and libraries.  But back before the digital age, books were still able to create incredible covers using the simplest designs to get their point across.  Case in point is the infamous book 1984 and its straight to the point cover.  Everything about this cover screams ominous and dominant, from the giant title looming on the top, looking as if it is actually a person standing tall, to the steady gray wall that surrounds both sides, making the reader feel trapped.  The megaphone speakers that face in every direction, presumably barking the commands of the angry looking face on the screen, entice a feeling of smallness, insignificance, and fear.  Everything that this book is supposed to make the reader feel is made blatantly obvious on the front cover. 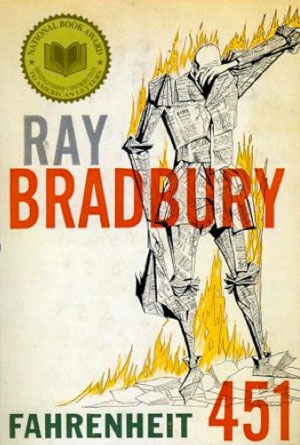 This is another classic novel with another incredible cover, without the aid of digital art. Ray Bradbury’s name takes front and center because people are more likely to recognize the name than any artwork that may grace the front. But the author doesn’t steal the entire scene, as it’s impossible to miss the man that is burning in the background. It is only with a second glance that the reader sees that the man is made from paper, and not just regular paper at that. The paper has words and writing on it; they are pages from the books that are burned in the dystopian future. It makes a powerful statement about the novel itself; that by burning and destroying the books, these people are actually in fact destroying themselves. One last thing that makes this cover so enticing is the small print at the very bottom, stating that particular addition, complete with original artwork, is fifty years old. It invites readers to see how the author saw the future, and how right or wrong he actually was. 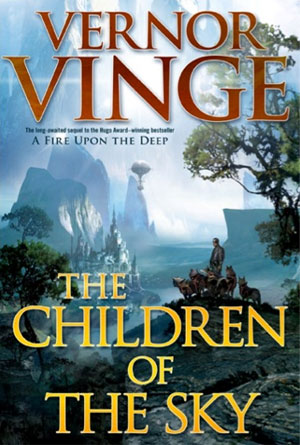 The Children of the Sky: Vernor Vinge

For science fiction enthusiasts, the name Vernor Vinge may be a huge name in this particular genre, which makes the huge print of the author so eye-catching. Even for those that may not be familiar, it’s hard to miss the large red letters of the name that dominates the top part of this cover. On the bottom, only in slightly smaller print but still taking over a third of the picture, is the name of the book. Like the red of the author, the golden yellow brightly contrasts against the pale blue background, making it another eye-catching effect. Once the reader has picked the book up, they see an image of strange landscape, that doesn’t look like it may be from our planet; at least not from our time. There is a highly contrasting juxtaposition of person with a pack of wolves that seems like something from the past, with the flying, balloon-like ship in the background that seems like something from the future. The image itself is beautiful and alluring and only adds to the overall success of this book cover.

In the world of notebooks, spiral notebooks never go out of style. Despite the existence of digital notebooks, END_OF_DOCUMENT_TOKEN_TO_BE_REPLACED

As an author or publisher, you’re accustomed to using the power of words to captivate your audience’s interest. END_OF_DOCUMENT_TOKEN_TO_BE_REPLACED

An electronic device that embraces portability and functionality, that’s what defines iPads in our world today. They’re a END_OF_DOCUMENT_TOKEN_TO_BE_REPLACED

If you’re looking for a cost-efficient solution for your print projects, you’d want to try publishing your content END_OF_DOCUMENT_TOKEN_TO_BE_REPLACED