When it comes to versatility, it’s impossible to rule out Rod Serling’s name in the list. He was END_OF_DOCUMENT_TOKEN_TO_BE_REPLACED

Have you ever read the book or watched the movie “Stuart Little” and “Charlotte’s Web”? The person behind END_OF_DOCUMENT_TOKEN_TO_BE_REPLACED

A man of strong opinions—that’s what best describes writer, journalist, and critic George Orwell. What made him exceptional END_OF_DOCUMENT_TOKEN_TO_BE_REPLACED

Funny novels are sometimes hard to write, because humor is different from person to person. In order for a humorous novel to be successful, the writer has to be able to find an even playing ground where most people are going to understand and appreciate the humor within the pages. Making a cover for these books usually isn’t nearly as hard as actually writing them, as people respond to visual stimulation much quicker and easier than long jokes in written word. The trick is to have a cover that is not only funny, but can relate to the book without giving too much away. Below are a few covers that do this well. 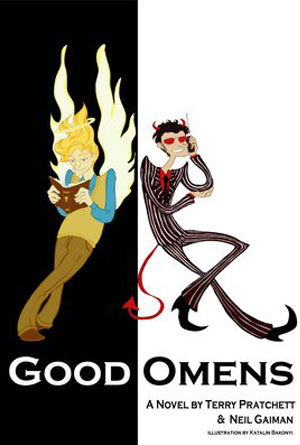 Good Omens by Terry Pratchett and Neil GaimanCartoons are great for covers because they can depict ideas that real life photos are just not capable of doing. And this is a perfect example of cartoons being used to show the start differences of good and evil in juxtaposition. The cover is split right down the middle with a female angel contrasting against a black background and a male devil contrasting against a white background. Like a comical yin yang, these two images come together to form one humorous cover piece that is sure to have readers not only pausing for a second look, but looking inside to find out more. There are so many stereotypical ideals represented in these two simple characters. Good is an angel, a woman, in light comfortable clothes that show her to be an everyday person. She is reading a book and improving her mind, and of course “Good” of the title reigns underneath her. “Omens” which can make a reader think of ominous is underneath the devil, a man. He is dressed sharply in a business suit; because of course money is the root of all evil. He is talking on a cell phone, likely for another business deal. But of course, the angel is against a black background and the devil is against a white one, so maybe everything is not as it appears. No matter what happens in the pages, this cover shouts at the reader about good and evil, and invites them to learn more. 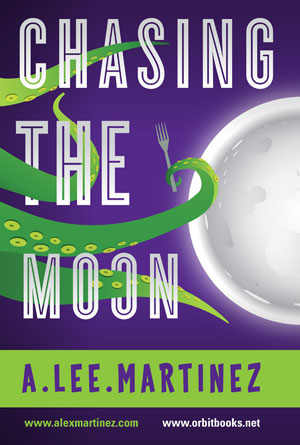 Chasing the Moon by A. Lee MartinezSo really, if you are looking through the humor section in your local bookstore, what is going to grab your attention more than bright green tentacles against a sky for the background? Not only that, but these tentacles have woven their way through the letters of the title, and one of them is holding a fork. There isn’t going to be much around that is going to grab attention better than that. The title itself, though in very large white letters that contrast perfectly against the dark blue and purple of the sky, is really the second thing that is noticed because the tentacles are just so jarring. And it is the background of the night sky and the very large, full moon brightly shining off the side that really makes them stand out. Because even with the fork, if these tentacles were set against a watery background, where they belong, it wouldn’t create nearly as much of an effect as they do in this position. That effect is so immediately jarring that readers really have no choice but to stop and take a closer look, even if it is just to confirm that they really did just see what they thought they saw. 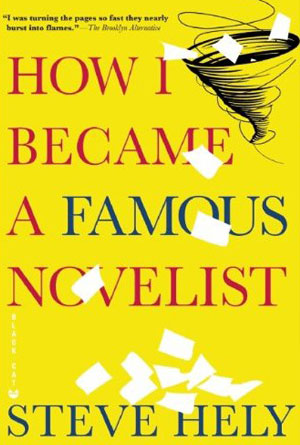 How I became a Famous Novelist by Steve HelyAt first this design may look more like a child’s book than one that is aimed at adults, and it is that technique that will help it to stand out among its fellow stories on the bookshelf. People expect to see “adult” covers in the adult section and “kid” covers in the kid section. So when they see this one in the adult section, it’s going to make them pause. And that pause is just long enough for them to want a closer look when they read the humorous title. The fact that the word “Famous” is in a different color than the rest of the title shows that maybe famous isn’t really the right word to be used. Combined with the sketched tornado whirling pieces of paper all over the cover, and the reader gets the idea that famous is probably the exact opposite of what this character has truly become. Of course there is only one way to find out how far from the truth this title/statement really is, and that is to open the cover and read at least a little bit. By standing out with a bright yellow cover that looks childlike, and with one word in the title that stands out against the rest, this cover very successfully grabs attention. 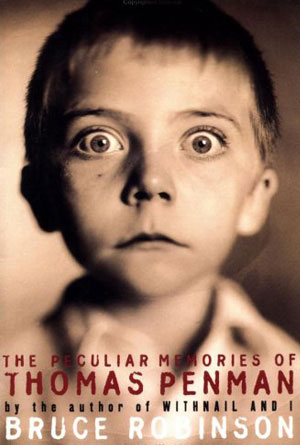 The Peculiar Memories of Thomas Penman by Bruce RobinsonThey say a picture is worth a thousand words, but this picture is probably worth an entire novel. Sometimes it is very hard for a cover designer to come up with the perfect design that really illustrates the basic idea of a novel without giving away too many details. And sometimes a designer lucks out by finding the perfect photo that can not only give a brief glimpse of life to the story within the following pages, but can also mimic the tone and/or genre of the novel itself. This one still shot of a young boy with very wide eyes and a comically surprised or scared look on his face is the perfect hint to the reader of what they can expect from the story itself. It catches them off guard, gives them a little chuckle, and just enough reason to find out just what this boy is so wide-eyed about.
Previous
Next