Fantasy covers have to juggle the concept of providing a window to a whole fantasy world with one visually attractive representation. Below are 4 cover designs that visually represent their stories and the fantasy genre well. 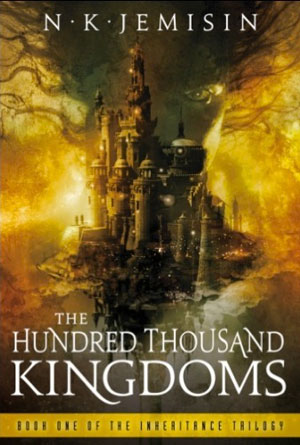 The Hundred Thousand Kingdoms: PN.K. JemisinFantasy readers are going to enjoy the cover art just as much as they enjoy the novel within, which is why it is so important to make an aesthetically pleasing cover that correctly portrays the story. This cover is beautifully done, with the author’s name at the top, and the title at the bottom, they form a frame of words, that adds to instead of contrasts with, the stunning picture in the middle. The picture itself is an immediately declaration to the fantasy world: a large castle that seems to float on the water, a woman in the background that looks over it, though it is unknown if she looks menacingly or benignly. As the first book in the series, it tells the readers that when they finish this one, the story isn’t over, and for most readers this is great news! No one likes to actually finish a book because it means the end of the story. This cover promises that after the last page, the story will go on. This is truly a wonderful cover. 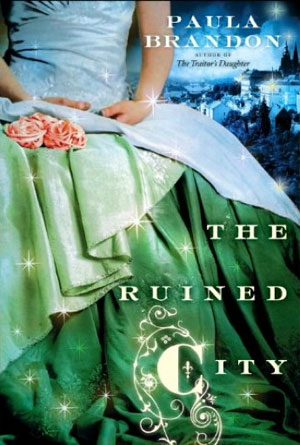 The Ruined City: Paula BrandonWhen it comes to book covers, contrasting elements can have either a positive or a negative effect, but either way it is usually something small that doesn’t particularly make or break the cover itself. This is the exception, with a huge contrast between the idea made in the title, and the brilliant picture that fills the background. The title itself, when read, brings to mind images of a destroyed city; buildings collapsed, streets on fire, devoid of life. But the brightly colored white font and especially the intricate design that surrounds the letter C, make it sound like the very opposite. And if that didn’t have a contrasting effect, the background image certainly does; with a girl sitting outside of what looks like a perfectly fine city, wearing a beautiful dress, with flowers in her lap and dazzling lights surrounding her. Immediately the reader is very curious as to why, with such a beautiful scene, the story could be about a ruined city. This immense contrast is what makes this cover so enticing, and an overall great introduction to the story. 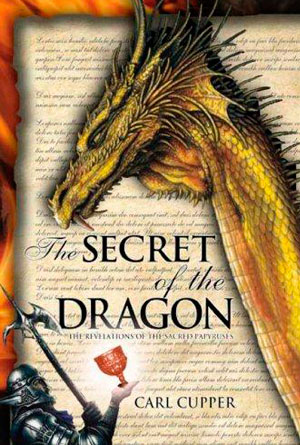 The Secret of the Dragon: Carl Cupper

It’s hard to browse through a fantasy section and not find at least one cover with dragons on it.  It is, however, a little harder to find a cover that doesn’t depict dragons as evil, human eating creatures that need to be destroyed.  That’s one thing that really makes this cover stand out; instead of a knight frozen forever in a battle to the death with a dragon, this cover shows the two at peace.  Instead of raising a sword, it appears the knight is raising a glass, perhaps in tribute, perhaps in friendship.  The dragon looks down at him, a subtle smile on his face and wisdom in his eyes.  In the background there is a piece of paper, a handwritten text of some kind, and from the title in the foreground, it can be assumed that this paper has something to do with the secret of the dragon.  Already the cover has dispelled a stereotype and enticed the curiosity of the reader, which is what makes this such an enchanting image. 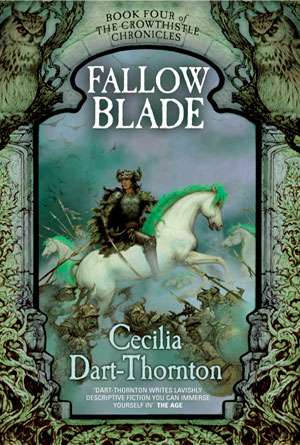 Fallow Blade: Cecilia Dart-ThorntonPractically everything about this cover is devoted to the genre of fantasy. From the horses with green manes, to the elflike figure that rides without a saddle, to the enchanting framework that surrounds apparent battle image. The printed name of the title and author blend beautifully into the image, becoming one with it instead of standing out awkwardly. The smaller print at the top allows readers to know that this book is part of a series, and that the story has started long before this rider came across the ones he is fighting. The long, wooden branches that curl their way around the bottom half of the book make it clear that this story takes place in an ancient time. Two owls look down on the scene, watching and waiting, and it is unknown to the reader if they will play a bigger part in the story to come. From top to bottom this is a beautiful cover that truly exhibits the important aspects of any fantasy novel.

In the world of notebooks, spiral notebooks never go out of style. Despite the existence of digital notebooks, END_OF_DOCUMENT_TOKEN_TO_BE_REPLACED

As an author or publisher, you’re accustomed to using the power of words to captivate your audience’s interest. END_OF_DOCUMENT_TOKEN_TO_BE_REPLACED

An electronic device that embraces portability and functionality, that’s what defines iPads in our world today. They’re a END_OF_DOCUMENT_TOKEN_TO_BE_REPLACED

If you’re looking for a cost-efficient solution for your print projects, you’d want to try publishing your content END_OF_DOCUMENT_TOKEN_TO_BE_REPLACED